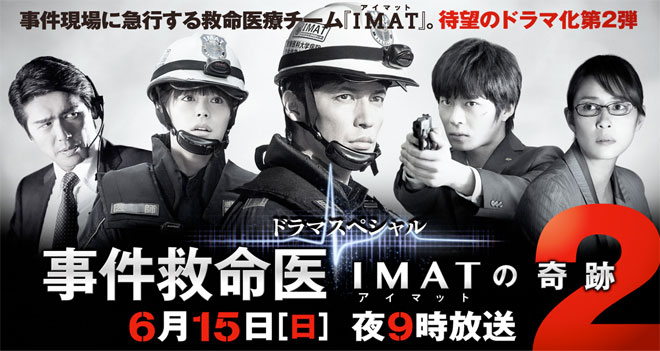 Date: From 9.00 p.m., 15 June 2014
Cast: Tamaki Hiroshi, Tanaka Kei, Kanjiya Shihori, Mizuno Miki, Ibu Masato, Takahashi Katsunori, Moriguchi Yoko, Sugisaki Hana, Shimizu Shogo, Daito Shunsuke
Synopsis: It has been one and a half years since Hyuga Akira (Tamaki Hiroshi) of IMAT (Crime Scene Medical Assistance Team) and Kageura Takuma (Tanaka Kei) of SIT (Special Investigation Team) met because of a hostage taking incident at Hokushin Bank. Hyuga works a normal schedule at Koto Medical University Hospital while Kageura has been made responsible for disobeying the orders of his superior regarding the case. He is transferred to the Security Department to lead each day in obscurity. There is a patient whom Hyuga currently has special feelings for – 17-year-old Tachibana Aki (Sugisaki Hana) who is waiting for a heart transplant. Aki is the girl whose life Hyuga rescued when he was mobilised as IMAT. A donor has been found and Hyuga as well as the attending physician, heart surgeon Nishigori Ayaka (Moriguchi Yoko) are filled with hope. On the other hand, Kageura is ordered to be the security police for politician Fukuzawa Eikichi (Shimizu Shogo), a former police bureaucrat. Fukuzawa was head of the Criminal Affairs Division in charge of the case of the Tokyo Skyland bombing 26 years ago which claimed the life of Kageura’s father, and considered to be the person responsible for causing the case to go unsolved. He is going to inspect the city buses. The day of the inspection is also the day of Aki’s heart transplant. The time at which the bus Fukuzawa has boarded moves off, is the time Ayaka begins operating on Aki. Hyuga and Miyama Yukari (Kanjiya Shihori) join the surgery as assistants. The donor’s heart is delivered. However, it suddenly explodes after it is taken out from the container. Aki’s new heart is lost … … At that same moment, something unusual happens on board the city bus. A man has pointed a gun to the back of Kageura’s head. The bus is hijacked by a mysterious armed group in the blink of an eye.
Official Website: www.tv-asahi.co.jp/imat

This blog contains information and musings on current and upcoming Japanese dramas but is not intended to be comprehensive.
View all posts by jadefrost →
This entry was posted in Spring 2014 Drama Specials, TV Asahi and tagged IMAT, Kanjiya Shihori, Mizuno Miki, Takahashi Katsunori, Tamaki Hiroshi. Bookmark the permalink.