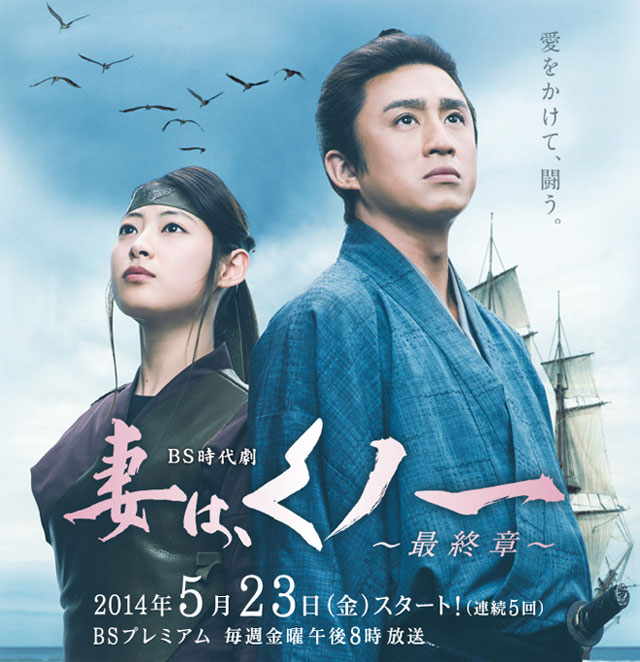 Story
Former Hirado domain astronomer Futaboshi Hikoma came to Edo in pursuit of the female ninja Orie who married him in order to carry out secret surveillance on the domain. His sincere love for Orie awakens her love, and her mother Masae ends up exchanging her own life so that Orie can break free from being a ninja. This is successful and the couple are briefly reunited. But Orie’s superior Kawamura Shinichiro relentlessly sends pursuers in an attempt to capture her for breaking the ninja code. She suffers a severe wound and is sheltered by a woman called Otsuru at a fishing village. On the other hand, Matsuura Seizan, the Hirado domain’s former feudal lord, breaks a ban by the country and converts a shipwrecked vessel into a seagoing one as he tries to embark on trade with foreign countries. Because letters of request to the foreign countries to make port calls which Futaboshi Ganjiro has brought back from Nagasaki have fallen into the hands of Kawamura, Hikoma is ordered by Seizan to forge documents. Seizan’s daughter Shizuko begins to get interested in Hikoma who frequently goes in and out of their suburban residence. Meanwhile, Hikoma meets Kawamura before Masae’s grave and is convinced that Kawamura is the leader of the group pursuing Orie. Although Hikoma and Orie have feelings for each other, it is difficult for them to be together. Hikoma, who does not have much time until the vessel sails, desperately searches for Orie. But Orie has started to believe that even though she loves Hikoma, she will cause trouble for him and tries to back away. As the couple’s feelings entwine and entangle, they reach the day of the final showdown for their love.

Characters
Ichikawa Somegoro as Futaboshi Hikoma
A retainer of the Hirado domain. He is skilled at astronomy and the art of sailing, and finds favour in the eyes of the former lord of the domain, Matsuura Seizan. He married the beautiful ninja Orie who was sent to investigate the Hirado domain without knowing much about her. But when she disappeared after completing her mission, he chased after her and came out to Edo where he met Seizan and gradually got drawn to his enlightened thoughts. He believes in Orie and keeps searching for her while being an instructor at the temple’s school.

Takimoto Miori as Orie
A runaway ninja. She worked for Kawamura Shinichiro, a Shogunate secret agent, but truly fell in love with her sham husband, Futaboshi Hikoma. She breaks the ninja code and turns on Kawamura. Although she is chased after by pursuers, she would appear and take risks to save him each time he is in a crisis. Her existence endangers him and she is in a quandary over whether she should back away … …

Tanaka Min as Matsuura Seizan
The Hirado domain’s former feudal lord. A master of the sword, he is known as a man accomplished in both literary and military arts who left behind a collection of essays on politics, culture and customs in the late Edo period. As foreign vessels ply Japan’s coast, he maintains an interest in overseas countries and is watched by the shogunate. He spots people of ability and handpicks Futaboshi Hikoma to be the captain of a vessel bound for an overseas destination.

Wakamura Mayumi as Masae
Orie’s mother. She prided herself for being the best ninja who served the Kawamura family. However, she turns on Kawamura Shinichiro in an attempt to let Orie get out of being a ninja, and loses her life. During her youth, she got close to Matsuura Seizan because of a mission, and had Orie.

Wada Soko as Kawamura Shinichiro
Orie’s former superior. He is proud to have been born to a Shogunate secret agent, and earns the trust of the shogunate for his swordsmanship and information network that leaves others in the dust. Just as he is scheming against the Hirado domain as a warning to various enlightened domains, he is betrayed by Orie and her mother, Masae, and misses an opportunity to corner Matsuura Seizan. Suffering the humiliation of a suspension, he tenaciously pursues Orie, but are these feelings hatred or love?

Maiko as Shizuko
Matsuura Seizan’s daughter. She is over 30 and still unmarried after several failed talks of marriage, and lives with her father in the same Tokyo residence. She has maternal feelings for the artless Futaboshi Hikoma, and meddles in this and that.

Kajihara Zen as Futaboshi Ganjiro
Futaboshi Hikoma’s adopted child. A frivolous person whom the clan reluctantly chooses to transfer responsibility for the family to when Hikoma sets out on a journey to find Orie. However, he is actually a ninja of the Hirado domain who has been serving Matsuura Seizan since the time he was the feudal lord. He is dispatched to the sea port of Nagasaki, but … …

Horibe Keisuke as Senemon
Futaboshi Hikoma’s childhood friend. He laid down his sword and became the adopted child of a merchant, but is still a person who understands Hikoma well. He supports Matsuura Seizan by participating in his plan for trade with foreign countries.

This blog contains information and musings on current and upcoming Japanese dramas but is not intended to be comprehensive.
View all posts by jadefrost →
This entry was posted in NHK, Spring 2014 Dramas and tagged Ichikawa Somegoro, Takimoto Miori, Tsuma wa Kunoichi Series, Wakamura Mayumi. Bookmark the permalink.