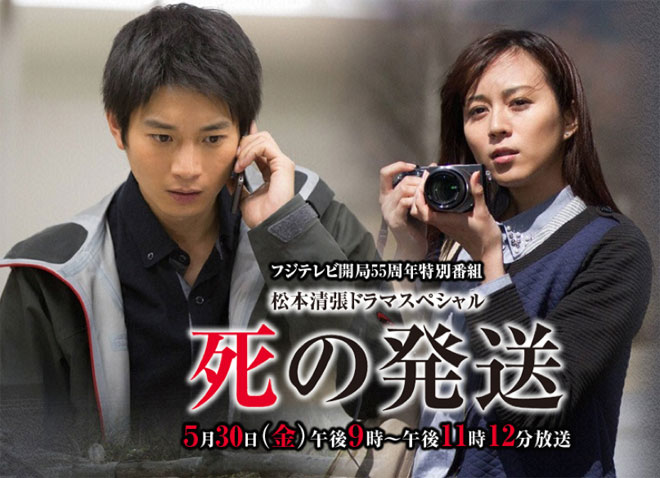 Date: From 9.00 p.m., 30 May 2014
Original Work: Shi no Hassou by Matsumoto Seichou
Cast: Mukai Osamu, Higa Manami, Terajima Susumu, Yamanaka Takashi, Asaka Mayumi, Matsuo Satoru, Tamaki Takamasa, Nakamura Yasuhi, Shiba Toshihiro, Ito Yuko, Bengal, Osugi Ren, Terao Akira
Synopsis: Reporters Sokoi Takeya (Mukai Osamu) and Tsumura Aki (Higa Manami) work for a publishing company’s weekly magazine, Shukan Dodongo. They are ordered by their chief editor Yamazaki Jiro (Terao Akira) to keep tabs on former bureaucrat Okase Shohei (Shiba Toshihiro) who has completed his prison term and just been released. Seven years ago, Okase was arrested for embezzling 1 billion yen. But at that time, the investigation only established what he had done with 700 million yen. Yamazaki expects that Okase will go to recover the unaccounted 300 million yen from its hiding place after his release from prison. Following his visit to a racehorse training centre, Okase heads to a district of traditional Japanese restaurants in Kagurazaka, but Takeya and Aki lose sight of him down there. After that, news comes in that Okase’s body was found strangled at the Katsuura cemetery in Chiba Prefecture. Guessing that the murder is related to the unaccounted money, Yamazaki goes with Takeya to Nishida Stables where Okase had stopped by. At the stables, they hear from stable hand Sueyoshi Hideo (Yamanaka Takashi) that the owner of Nishida Stables is Nishida Ryuzo (Terajima Susumu) and the racehorse owner is the Diet member Tateyama Torahei (Osugi Ren). Yamazaki no longer speaks about Okase since that day. Feeling confused about his sudden change in attitude, Takeya asks why but Yamazaki does not give any answer. After that, a baffling case occurs. A dead body is found stuffed in a trunk in the woods of Mizusawa City in Iwate Prefecture. Is there a connection with Okase’s case? What will Takeya and the others pursuing this additional case arrive at? A battle between the criminal and the Shukan Dodongo reporters begins.
Official Website: www.fujitv.co.jp/shino_hassou

This blog contains information and musings on current and upcoming Japanese dramas but is not intended to be comprehensive.
View all posts by jadefrost →
This entry was posted in Fuji TV, Spring 2014 Drama Specials and tagged Higa Manami, Matsumoto Seichou, Mukai Osamu, Osugi Ren, Shi no Hassou, Terajima Susumu, Terao Akira. Bookmark the permalink.