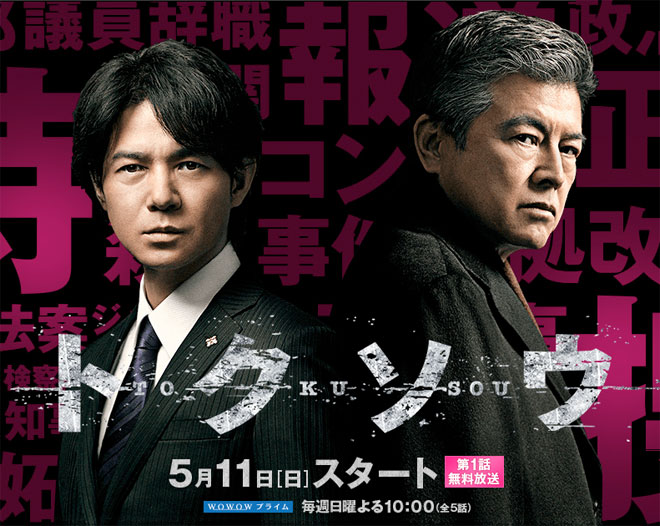 Story
Special prosecutors are called the most powerful investigating authority. Oda Toshiya is a public prosecutor who has been transferred over from the Chiba Public Prosecutors Office. He is quickly assigned to the team led by Onizuka Tsuyoshi, the deputy of the Special Investigation Department. Viewed as the Special Investigation Department’s elite unit, Onizuka’s team has started work on a bribery case involving Dainippon Construction, a major construction company which was responsible for the construction of a dam, and a prefectural governor. Oda is bewildered by the intimidating air of Special Investigation Department which is an organisation like an army but proceeds with the investigation. Meanwhile, Maichou Shimbun legal journalist Sakurai Tomoko is also pursuing the truth of the bribery case. In order to gain a scoop within the male-dominated press club, Tomoko initiates contact with the highest reaches of the prosecutors office. Onizuka discovers a memo hinting at bribery in a simultaneous raid of Dainippon Construction. Without conclusive evidence, he creates the scenario of giving and receiving bribes. Did this really take place? Oda, who has misgivings about Onizuka’s investigation, embarks on his own search. He finally arrives at a subcontractor, but … …

Characters
Yoshioka Hidetaka as Oda Toshiya
A public prosecutor with the Special Investigation Department. He transferred from a district public prosecutors office to the Tokyo Public Prosecutors Office. It has been his long-cherished dream to move to the Tokyo Public Prosecutors Office’s Special Investigation Department and he ends up working in Onizuka Tsuyoshi’s team. He has a hidden personal goal. Even though he is in an organisation, he possesses the keenness to get hold of the truth through his own thinking. He persists in justice the right way and has a strong will. He gradually grows opposed to Onizuka’s ideology.

Matobu Sei as Sakurai Tomoko
A Maichou Shimbun legal journalist. She has had a string of scoops despite being a female in the male-dominated press club. She is called “female ninja” behind her back by the reporters around her. She is Oda Toshiya’s ex-girlfriend.

Sano Shiro as Shinohara Norio
The head of the Tokyo Public Prosecutors Office’s Special Investigation Department. Seconded from the Ministry of law, he pins his hopes on his deputy, Onizuka Tsuyoshi, to pursue cases that will translate into actual achievements while he is the head of the department.

Yoshizawa Hisashi as Sasano Yasuyuki
A Tozai Shimbun legal journalist. He has convictions as a legal journalist, and has misgivings about the present Special Investigation Department and mass media.

Hasegawa Tomoharu as Hagiwara Tsutomu
Maichou Shimbun’s top legal journalist. Amidst the intense battle for a scoop, he puts pressure on Sakurai Tomoko as a journalist who worked his way up the ranks.

This blog contains information and musings on current and upcoming Japanese dramas but is not intended to be comprehensive.
View all posts by jadefrost →
This entry was posted in Spring 2014 Dramas, WOWOW and tagged Matobu Sei, Miura Tomokazu, Sano Shiro, Tokusou, Yoshioka Hidetaka. Bookmark the permalink.