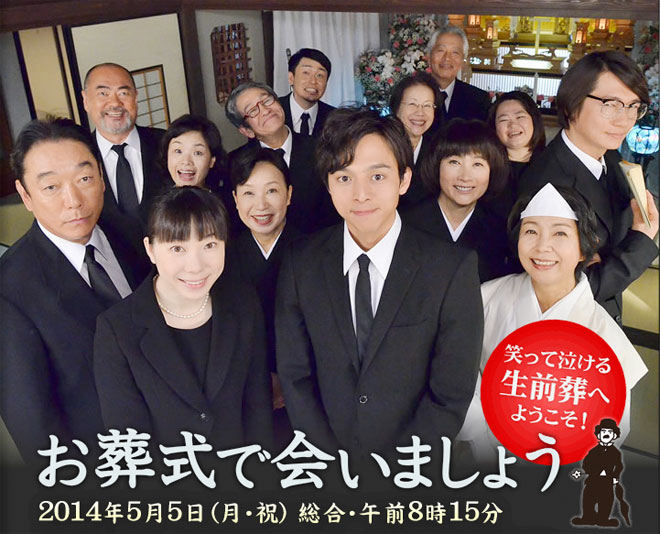 Date: From 8.15 p.m., 5 May 2014
Cast: Mitsushima Shinnosuke, Hiraiwa Kami, Iura Arata, Yo Kimiko, Ishimaru Kenjiro, Ichige Yoshie
Scriptwriter: Iketani Masao
Synopsis: 29-year-old Otaguro Isamu (Mitsushima Shinnosuke) is a struggling actor who once stole the show in a big hit drama. However, he has lived in obscurity since then. Isamu’s older wife Kieko (Hiraiwa Kami) is a big fan of his and has been shouldering the household expenses by working at the ward office because of his irregular income. One day, a notice suddenly arrives from Isamu’s 61-year-old mother Yasue (Ichige Yoshie) who should be as fine as she can be in the countryside. It reads “Come. A funeral will be performed while I’m alive.” Isamu has actually kept a distance from his family home and relatives because he hates being told “How long are you going to continue doing this?” and for a number of other reasons. But if he does not go, his inheritance may be reduced and he cannot have that. Also, why has his mother suddenly brought up a funeral before she dies? When a dubious Isamu visits his family home alone for the first time in years, Iriguchi Mantaro (Ishimaru Kenjiro), the mysterious guide for the funeral; Junichi (Iura Arata) the older brother he is on bad terms with; and Ayako (Yo Kimiko), his mother’s annoying younger spinster sister are gathered there. With these members present, there is no way the funeral can be completed without any problems. Utter confusion occurs at this slightly bizarre funeral ceremony.
Official Website: www.nhk.or.jp/drama/osoushiki

This blog contains information and musings on current and upcoming Japanese dramas but is not intended to be comprehensive.
View all posts by jadefrost →
This entry was posted in NHK, Spring 2014 Drama Specials and tagged Iura Arata, Osoushiki de Aimashou, Yo Kimiko. Bookmark the permalink.