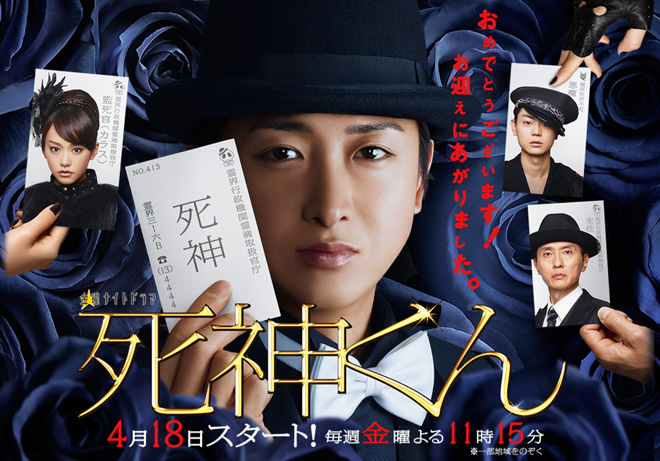 Story
Shinigami-kun, alias grim reaper #413, is a rookie who pronounces the death of people scheduled to die and brings these souls to the nether world. He would appear with the signature phrase “Congratulations! I’m here to call on you” although it is hard to say how this can be a happy occasion, and watch over the dying. To a grim reaper, persuading people attempting to commit suicide and preventing unforeseen deaths is also an important task. But because #413 is new to this grim reaper work, he has a tendency to lean towards humans in his judgments, break the rules of the nether world and get reprimanded by his superior. Kobayashi Mami, a high school girl, has suffered big burns to her face in a fire accident and ended up losing her sight. Despairing at her future, Mami choose to take her life and jumps from the rooftop of the hospital. A man dressed in a black suit with a butterfly necktie and black hat appears in front of her and tells her, “I’m afraid you cannot die yet.” This man is Shinigami-kun. Saved by the sudden appearance of the grim reaper, Mami does not die. The only friend who is worried for Mami is Onishi Fukuko. Mami had been very popular with guys due to her beauty while Fukuko, who is not as lovely, was always Mami’s foil. Now the guys ignore Mami completely as a result of the burns and only Fukuko visits her every day. Shinigami-kun appears before Fukuko and tells her, “Congratulations! I’m here to call on you.” She has three days to live and he advises her to live these remaining days without regrets. Fukuko is unable to accept that she is so close to the end of her life. Concerned about her, Shinigami-kun offers her his own advice. Fukuko starts to consider the things she has left undone despite her dread and sorrow, but … …

Characters
Ohno Satoshi as Shinigami-kun alias Grim reaper #413
A grim reaper who pronounces the death of people scheduled to die and brings these souls to the nether world. His attire is a black suit and butterfly necktie. In the human world, he appears to be around the age of 30. He is mysterious and somewhat cool looking. His real name and detailed profile are completely unknown. Although he performs his work diligently, he has a tendency to lean towards humans in his judgments because he is still a rookie. Because of that, he often gets reprimanded by his superior.

Kiritani Mirei as Supervisor
Shinigami-kun’s supervisor. In the human world, she takes the form of a crow, appearing in unexpected places and at unexpected moments. She would disparage Shinigami-kun’s work with rather harsh remarks.

Suda Masaki as Devil
Like a competitor of the grim reapers, he would grant three wishes in exchange for the souls that should be sent to the netherworld.

Matsushige Yutaka as Chief
He manages the grim reapers. He would set foot in the human world on some occasions and check on the check on the work of Shinigami-kun without warning.

This blog contains information and musings on current and upcoming Japanese dramas but is not intended to be comprehensive.
View all posts by jadefrost →
This entry was posted in Spring 2014 Dramas, TV Asahi and tagged Kiritani Mirei, Matsushige Yutaka, Ohno Satoshi, Shinigami-kun, Suda Masaki. Bookmark the permalink.