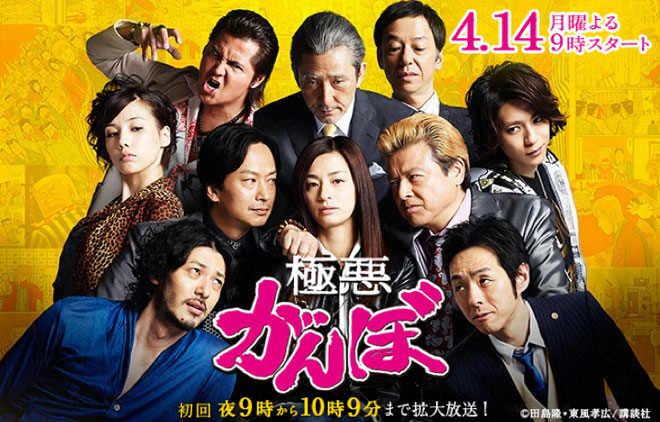 Story
Kanzaki Kaoru, a part-time worker, gets threatened with the payment of 2 million yen in “inconvenience fees” by Dototsu Koji inside a family restaurant. Her ex-boyfriend Takemoto Kazuma counterfeited Dototsu’s credit card to create money and was found out. But because Takemoto has disappeared without a trace, Kaoru is forced to meet Dototsu. Then Kaneko Chiaki and Natsume Daisaku come in. In addition, Makiage Teruo brings Yashiki Satomi with him. Satomi also owes Makiage 2 million yen. Kaneko starts to settle accounts on Dototsu’s behalf and presents a business card with Koshimizu Management Consultants written on it. At Koshimizu Management Consultants at this moment, its director Koshimizu Gen summons Fuyutsuki Hiraku and hands a copy of a notarised document to him with the instruction to recover 8 million yen in bad debt. The lawyer Toyotomi Iyataro is beside him, and the employee Nukemichi Takumi is also inside. Meanwhile, at the family restaurant, Kaneko shows 4 million yen in banknotes to both Kaoru and Satomi, and explains that if they hand this money to Dototsu and the others and recover the promissory notes, they can cut off those people. Accepting his proposal, Kaoru and Satomi sign the new IOUs and give Dototsu and others back their money. When Kaoru and Satomi ask how they should pay back the newly borrowed money, Kaneko suggests the bar, Mayakashi, where Mayakashi Kiriko. At Mayakashi, he introduces them work as live-in companions on some island. Kaneko declares to the two of them who are doubtful of this dodgy job, that they will be able to make 2 million yen in three months with this. Kaoru is told that they have until their departure tomorrow to give an answer … …

Characters
Ono Machiko as Kanzaki Kaoru
An employee of Koshimizu Management Consultants. Her hobby is saving money. A down-to-earth female whose dream is a stable life. She does not discriminate against anyone and treats people with warmth. She believes that there are more important things than money and lives positively. When she was a child, her family’s restaurant went bust and both her parents passed away. Because of that, she had to hold part-time jobs to pay off their debt. Even so, she believes in her mother’s words that “There are plenty of things in this world that cannot be bought with money. These things are forever important.” She lends 1 million yen to a colleague, but this kindness backfires when she gets sadled with a huge debt and plunges into the underworld.

Shiina Kippei as Fuyutsuki Hiraku
An employee of Koshimizu Management Consultants. A former Tokyo Metropolitan Police Department bureaucrat. He is a cool and calm schemer. He pursued the fast track and was transferred to Kanekure Prefecture. At that time, he was a very righteous man who despised people like Koshimizu Gen who make money by taking advantage of people’s weaknesses. However, he was betrayed within the precinct and given a punitive dismissal. He got sick of upholding justice. He was scouted for his network of contacts and intellect.

Miura Shohei as Takemoto Kazuma
Kanzaki Kaoru’s ex-boyfriend and former colleague who is somehow mixed up with Kaoru. He hates being shackled to an organisation and would keep moving from one part-time job to another. He is good at making a living by landing strange jobs with his sociability and charm but without the feeling of heroism of a “do-or-die” nature. He loves gambling and always runs out of money. Each time they meet, he is working in a different job such as a health gadget or teaching materials salesman, or host.

Naka Riisa as Mayakashi Kiriko
The proprietress of the bar, Mayakashi. Her side business is introducing clients to Kanzaki Kaoru and Kaneko Chiaki. She is the former leader of a famous local female gang and after she retired, she worked at hostess bars and clubs before starting out on her own. She is plucky in comparison to her age and she lives for counting the gains and losses.

Takeuchi Riki as Natsume Daisaku
An employee of Koshimizu Management Consultants and former truck driver. He made the acqaintance of Kaneko Chiaki when he helped a person who skipped town and was invited to join the company. Although he has a quick temper and is always ready for fight, he is compassionate and easily moved to tears. He gradually starts to understand the unmercenary Kanzaki Kaoru who struggles to help the vulnerable. He dreams of having his own family.

Itao Itsuji as Nukemichi Takumi
An employee of Koshimizu Management Consultants and a former civil servant who was a general clerk at the ward office. Unlike Kaneko Chiaki and the others, he barely goes out, but brings in the franchise fees for the company. A mild-mannered man who tries to meddle in Kanzaki Kaoru’s business, but gets ridiculed by Kaneko Chiaki and the others.

Kobayashi Kaoru as Koshimizu Gen
The director of Koshimizu Management Consultants. A fixer who never comes out in public and supports the political circles from behind the scenes. He dropped out of Kyoto University and took over his family’s trading company. He invested the majority of the profits in real estate, and made enormous gains during the bubble era. When he was young, he burned with ambition and even approached the world of politics, but he realised that without money, politicians are mere people after all. He established ties with the real estate, consumer finance businesses and crime syndicates all over the country. He went into the underworld in order to get the upper hand in his dealings. He scouts Kanzaki Kaoru by pretending that he understands her.

Kudo Kankuro as Toyotomi Iyataro
The head of Toyotomi Iyataro Law Firm. A former public prosecutor who now works as a lawyer. Because he is a greedy lawyer who would help clients even if it means using dirty tricks, he is a person that Kaneko Chiaki and the others count on when involved in a police matter. He is a regular customer of Mayakashi Kiriko’s bar and is madly in love with her.

Odagiri Joe as Ijuin Tamotsu
A detective with Kanekure Police Precinct’s Community Safety Division. Fuyutsuki Hiraku’s former subordinate. He typically investigates trouble and crimes reported by ordinary citizens, but he is a rogue police who wields his law enforcement authority to blackmail, cover up, bribe and everything. Although he has subordinates, he would find reasons to investigate on his own and has a give-and-take relationship with Kaneko and the others.

Miura Tomokazu as Kaneko Chiaki
A veteran employee of Koshimizu Management Consultants. His father was a city council member but committed suicide after being arrested for a breach of trust. That put an abrupt end to his dream of becoming a politician. He is a money grubber and would relentlessly typecast clients into those who would probably know if cheated. He treats Kanzaki Kaoru who still tries to believe in people even though she was deceived, with contempt and takes the opportunity to use her to make his own money.

This blog contains information and musings on current and upcoming Japanese dramas but is not intended to be comprehensive.
View all posts by jadefrost →
This entry was posted in Fuji TV, Spring 2014 Dramas and tagged Kobayashi Kaoru, Kudo Kankuro, Ono Machiko, Shiina Kippei. Bookmark the permalink.