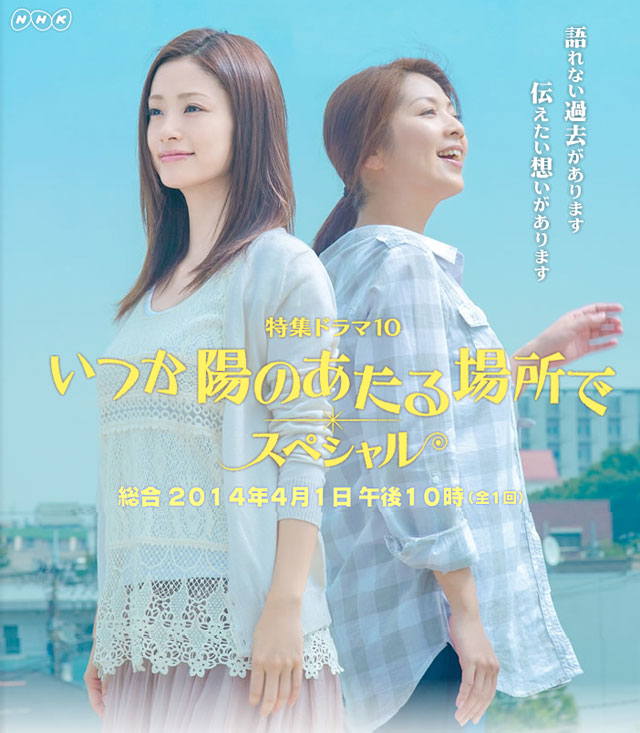 Date: From 10.00 p.m., 1 April 2014
Original Work: Itsuka Hi no Ataru Basho by Nonami Asa
Scriptwriter: Takahashi Maki (Pin to Kona, Itsuka Hi no Ataru Basho, Fuyu no Sakura)
Cast: Ueto Aya, Iijima Naoko, Saito Takumi, Daito Shunsuke, Fujimoto Kanato, Kinami Haruka, Shikanuma Yuki, Kaneko Akio, Tezuka Satomi, Ryu Raita, Matsukane Yoneko, Asano Atsuko
Synopsis: Komoriya Hako (Ueto Aya) meets Iwase Keita (Saito Takumi) again when he returns temporarily to Japan from the US. At one time, his street performance had given Hako the strength to live and they grew attracted to each other. Then Keita learned about the crime she committed to support the man she loved and the seven-year prison sentence. He cancelled his plans to go to the US for studies due to his strong desire to stand by her. But Hako did not want to get in the way of his dreams as a performer and backed away. Keita invites Hako to his family home, saying that he wants her to meet his family who are orange farmers in Shizuoka Prefecture. She receives a warm welcome from his parents (Kaneko Akio, Tezuka Satomi) and younger sister (Kinami Haruka) and frets about whether she should tell them about her past. Meanwhile, Eguchi Ayaka (Iijima Naoko) finds a postcard which has the words, “I want to eat grandma’s bread again”. It was written by her 9-year-old son Tomoki (Fuijmoto Kanato) who is now living at a children’s orphanage after she killed her husband in order to protect Tomoki from domestic violence and they were separated. Ayaka remembers that when she once saw Tomoki before without identifying herself as his mother, he had been holding freshly baked bread. She tries to write a reply but finds it difficult to do so. Then, Tomoki suddenly arrives. Although he does not know Ayaka’s face because they were parted when he was a young child, he feels a sense of familiarity. Seeing her son’s worry and hurt, Ayaka’s heart wavers … …
Official Website: www.nhk.or.jp/drama10/itsuka

This blog contains information and musings on current and upcoming Japanese dramas but is not intended to be comprehensive.
View all posts by jadefrost →
This entry was posted in NHK, Spring 2014 Drama Specials and tagged Itsuka Hi no Ataru Basho de Series. Bookmark the permalink.