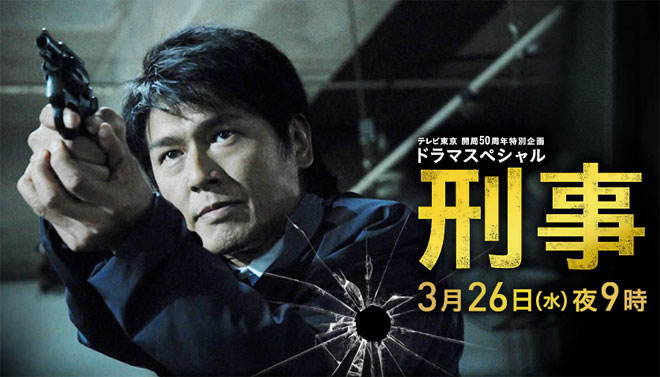 Date: From 9.00 p.m., 26 March 2014
Original Work: Keiji Hebi ni Yokogirareru by Hayasaka Akira
Cast: Takahashi Katsunori, Kazama Shunsuke, Kato Masaya (guest star) Nishimura Kazuhiko, Satoi Kenta, Uchida Asahi, Shiba Toshio, Takizawa Saori, Shinkawa Yua, Miyamoto Maki, Honda Hirotaro, Kusakari Tamiyo, Daichi Yasuo
Synopsis: Eight years ago, Assistant Inspector Akiba Minoru (Takahashi Katsunori) of the Tokyo Metropolitan Police Department’s First Investigative Division had his wife Yukie (Miyamoto Maki) taken hostage at home and murdered right in front of him due to the strong resentment of Tanabe (Kato Masaya) whom he had charged with assault. Because Akiba shot Tanabe dead the instant his wife was killed, he was shunted off to a precinct for a time. But several years later, he comes back to the headquarters and focuses on carrying out his duties even as he continues to struggle with the past. One day, Akiba receives news that Murasawa Katsumi (Uchida Asahi), a police officer who works at Tenouzu Minami police box, has been stabbed to death and also robbed of the gun in his possession. Murasawa was Akiba’s subordinate during his time at Suginami Chuo Precinct and they are still in touch. He idolised Akiba and set his sights on becoming a detective. Although Akiba is at a loss, he hurries to the crime scene and sees Murasawa’s dead body. In order to avenge Murasawa, Akiba starts to investigate. When he returns home that night, he is invited by his only daughter Miyako (Shinkawa Yua) to attend an association for crime victims and surviving families at the encouragement of Kawahara Sae (Kusakari Tamiyo), the owner of the bakery where she works part-time and whose own family was also murdered. Miyako has been participating in the association in an attempt to get over her mother’s death. She worries about her father always have nightmares, but Akiba stubbornly refuses. Terasaki Shuji (Daichi Yasuo) from the police precinct has been paired with Akiba and asks about the case in his past. He was the one in charge of the case at that time. Although it was officially announced that Akiba was forced to fire a shot because the criminal went on a rampage, in truth he might have forgotten that he was a detective on seeing his wife killed in his presence and shot the criminal to death? On the other hand, they obtain information from Murasawa’s wife Masami (Takizawa Saori) that Murasawa had recently been examining types of animal fur taken from the scene on his off days after witnessing someone dump what seemed to be a dog in the river. Nakayama Satoshi (Ozawa Ryota) who was on duty with Murasawa on the day he was killed, recalls that while the two of them were on patrol, a man had thrown something into the river at a bridge within the jurisdiction and left in a white Mercedes Benz. After that, Murasawa found out that the dog breed was a golden retriever. That same night, a man called Yamanouchi Shizuo (Ito Yozaburo) who was walking his dog in Ota district was murdered and the news that his beloved golden retriever has still not returned leaps out at Akiba. The next day, this news gets massive coverage and it is presumed that Murasawa had learned about the case and done his own investigation. The fur collected from Yamanouchi’s house matches the fur that Murasawa had taken, and because the stab wounds on both men are remarkably similar, there is a strong possibility that the man who dumped the dog is connected to their killings. Three months ago, Yamanouchi had joined a scam company as its senior managing director. He was an accomplice in confidence tricks, but the possibility emerges that this agonised him and he considered exposing the company. The opinion is that Yamanouchi was killed to silence him and Murasawa who had caught some whiff about this was also murdered … … In the midst of the urgency to identify the criminal in order to prevent another crime with the gun that was stolen, Akiba and Terasaki dig up people who live near the bridge and own a white Mercedes Benz. When they go over to the apartment building of one of the persons in question, Nagai Kiyoshi (Kazama Shunsuke), they hear from Nagai’s neighbour that a police officer had previously visited about a dog. Although Nagai was not in at that time, the neighbour says the police officer’s visit was later reported to Nagai and Nagai had dumped a dog in the river because he had run over it with his car. As Akiba and Terasaki are amazed by how all the criteria matches, Nagai comes back, but … …
Official Website: www.tv-tokyo.co.jp/keiji

This blog contains information and musings on current and upcoming Japanese dramas but is not intended to be comprehensive.
View all posts by jadefrost →
This entry was posted in Spring 2014 Drama Specials, TV Tokyo and tagged Kazama Shunsuke, Keiji, Kusakari Tamiyo, Takahashi Katsunori. Bookmark the permalink.