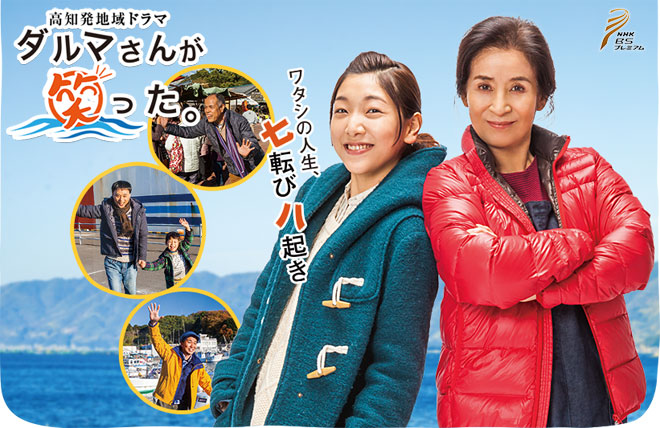 Date: From 10.00 p.m., 19 March 2014
Cast: Ando Sakura, Baisho Mitsuko, Takahashi Tsutomu, Toda Masahiro, Tanaka Yoji
Scriptwriter: Yoshizawa Tomoko (Dr DMAT, Kuro no Onna Kyoushi, Karyuu no Utage)
Synopsis: Matsui Mina (Ando Sakura) arrives at a port town in the western part of Kochi Prefecture from Kyushu to see the “Lucky Daruma Sunset”. This sunset only appears 10 days in a year. There is a reason why Mina, who has a divorced boyfriend Goto Takayuki (Toda Masahiro) with a son, must see it by New Year’s Eve. She only has four days left. Mina chances upon a fisherman Komatsu Isamu (Takahashi Tsutomu). He takes her to visit Hamada Kimiko (Baisho Mitsuko), the proprietress of ‘Izakaya Sango’. Kimiko, who is familiar with the Daruma Sunset, is well-liked by all the townspeople. Everyone regards her as a strong independent woman. Mina ends up staying on the second floor above ‘Izakaya Sango’. She is brought around shopping for New Year items and spring cleaning. Kimiko, who would forget herself and scold other people’s children, gets into a confrontation with Murayama Koji (Tanaka Yoji), a father who has brought his family on a trip to the town. Mina finds herself unable to understand Kimiko. Then Mina’s boyfriend and his 7-year-old son Satoshi come to the port town. Will Mina be able to see the Daruma Sunset and what is her decision?
Official Website: www.nhk.or.jp/kochi/darumasan

This blog contains information and musings on current and upcoming Japanese dramas but is not intended to be comprehensive.
View all posts by jadefrost →
This entry was posted in NHK, Winter 2014 Drama Specials and tagged Ando Sakura, Baisho Mitsuko. Bookmark the permalink.