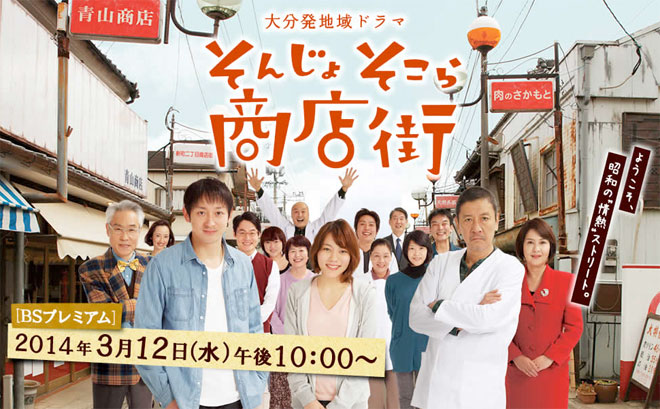 Date: From 10.00 p.m., 12 March 2014
Cast: Yamamoto Koji, Suzuki Anne, Kotegawa Yuko, Okuda Eiji, Moro Morooka, Ueda Shinobu, Tsuruga Koshiro, Oka Takeshi, Yamashita Akira
Scriptwriter: Habara Daisuke (Castella, Double Face, Beautiful Rain)
Synopsis: Aoyama Makoto (Yamamoto Koji) returns to the deserted shopping street in his hometown of Bungo Takada City in Oita Prefecture after 15 years. His mother’s death spurred him to resign from the event company he had worked at following his graduation from a Tokyo university, and find a job at Bungo Takada City’s chamber of commerce. Although the city prospered due to its strategic position in the Kunisaki Peninsula with the Rokugomanzan culture that fused Shinto and Buddhist philosophies still much in evidence, it had like many other provincial towns been forced into decline with the flow of people to Tokyo during the years of high economic growth. Pedestrian traffic vanished from the shopping street and it even became called an area “which only dogs and cats go past”. Makoto comes up with the ‘Showa no Machi’ plan to try to revitalise the shopping street. It is not to build any fancy public facilities in the hopes of attracting big factories but to make it into a place that recreates the Showa era. Makoto’s father Kozo (Okuda Eiji), the third-generation owner of the small-time candy store ‘Aoyama Shoten’, is contemptuous but Makoto gets his first love and childhood friend Sakamoto Mina (Suzuki Anne) who is the daughter of the butcher ‘Niku no Sakamoto’, and the fellows of the shopping street involved. They gather items to remember that bygone era by, mobilise many people and begin activities to attract tourists. At that moment, an unexpected comment by Bungo Takada’s mayor Oda Sayuri (Kotegawa Yuko) causes ripples … …
Official Website: www.nhk.or.jp/oita/drama2014

This blog contains information and musings on current and upcoming Japanese dramas but is not intended to be comprehensive.
View all posts by jadefrost →
This entry was posted in NHK, Winter 2014 Drama Specials and tagged Okuda Eiji, Sonjo Sokora Shotengai, Suzuki Anne, Yamamoto Koji. Bookmark the permalink.