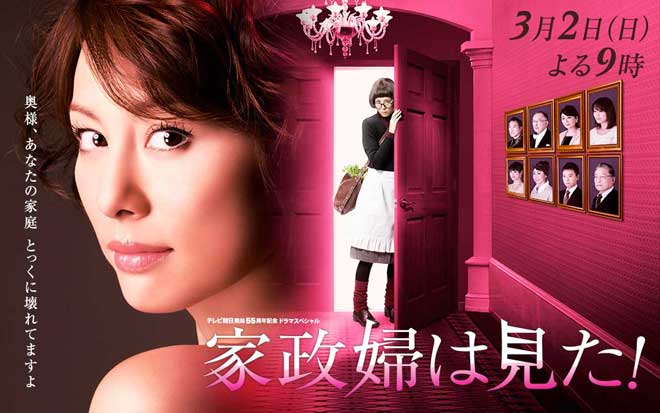 Date: From 9.00 p.m., 2 March 2014
Cast: Yonekura Ryoko, Kitano Kii, Matsushita Yuki, Omi Toshinori, Kitagawa Hiromi, Hasegawa Tomoharu, Sano Shiro, Musaka Naomasa, Tsutsui Mariko, Muroi Shigeru, Azuma Chizuru, Hashizume Isao, Ito Shiro
Synopsis: Sawaguchi Nobuko (Yonekura Ryoko) is a surly divorced housekeeper with Kyoei Housekeeping Agency which is managed by Hirata Makiko (Azuma Chizuru). Although Nobuko sports black glasses as well as loose, disheveled hair, she is actually an exceptional beauty, but is deliberately hiding this with makeup because of some trauma. Nobuko is sent to the Uehara family which runs a cosmetic surgery practice, with a big paycheck of 2 million yen a month. The agency’s client is 20-year-old Nakamura Akemi (Kitano Kii) who lives at the Uehara residence. She had heard from her late mother that her father is Uehara Hidemitsu (Ito Shiro), the chairman of Uehara Group, and has been living with Hidemitsu, his two sons Natsuo (Omi Toshinori) and Yujiro (Hasegawa Tomoharu) and their wives Michiko (Matsushita Yuki) and Keiko (Kitagawa Hiromi). In truth, Natsuo and Yujiro are half siblings and have been waiting for their inheritance. Now that Hidemitsu is old, fighting over the inheritance has escalated. Akemi herself is not spared in this feud. She faces a lawsuit from the sons and their wives that “she is not the chairman’s own child”. Hidemitsu who is partial to Akemi, declares that if she is not recognised as his biological daughter, he will take her for his wife. Will she get thrown out of the Uehara residence or will she become the wife of Hidemitsu whom she loves dearly as a father and has close to a 50-year age gap. Akemi is in a predicament and asks Nobuko to protect her from Hidemitsu and the rest of the family. Moved by Akemi’s eyes which immediately saw through the truth of who she is right from the start, Nobuko pledges her loyalty, but … … On the day that it is determined Akemi is not the biological daughter of Hidemitsu, he announces his marriage to her. However, right after that, Akemi is kidnapped by someone.
Official Website: www.tv-asahi.co.jp/kaseifuwamita

This blog contains information and musings on current and upcoming Japanese dramas but is not intended to be comprehensive.
View all posts by jadefrost →
This entry was posted in TV Asahi, Winter 2014 Drama Specials and tagged Ito Shiro, Kaseifu wa Mita! Series, Kitano Kii, Sano Shiro, Yonekura Ryoko. Bookmark the permalink.