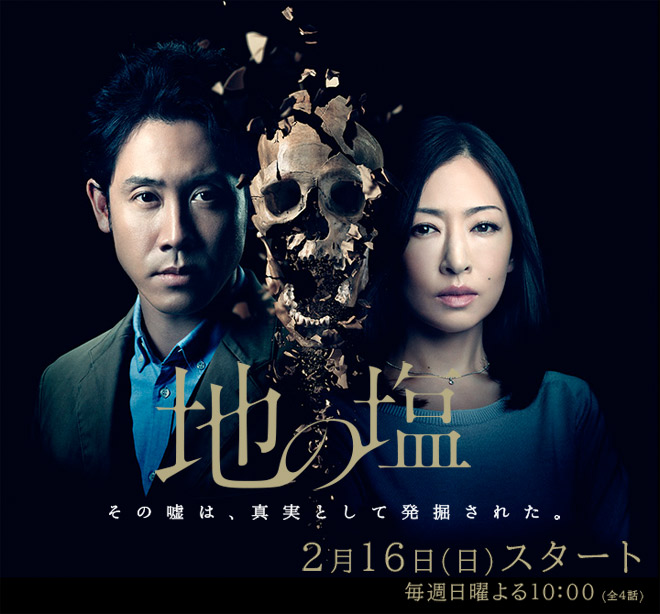 Story
Kamimura Kensaku, a hardworking, popular archaeologist, has made a big discovery that will upend history. The Shiona site which he found was widely held to have been a period in which humans did not exist in Japan. The town of Shiona, which has been suffering from a rapidly declining population, is instantly revitalised as a tourist attraction due to the unearthed remains. Through the efforts of Sakuma Rina, an editor of school textbooks, it is decided that Kamimura’s achievement will be published in the history textbook even though it is still at the exploratory stage. Rina feels drawn to Kamimura’s character. who speaks about the romance of the ancient era and takes archaeology seriously. However, just after the textbooks are printed, Kunimatsu Gentaro, a scholar who challenges Kamimura’s theory, pays Rina a visit and accuses him of fabricating his discovery. Meanwhile, Kamimura finds the bones of a female student who has been missing for 13 years by chance when he undertakes a new dig. The detective Yukinaga Taichi who pursued the case at that time starts investigating again. This evolves into a case that will rock society … …

Characters
Oizumi Yo as Kamimura Kensaku
The director of the non-profit organisation, Old Stone Lab. An archaeologist who has earned himself the nickname “God’s Hands” as a result of the Shiona archaeological dig. He is seen as a promising successor to Hiyama Eijiro due to his diligence, humility and way with words.

Matsuyuki Yasuko as Sakuma Rina
The editor of Azuma Publishing House. She is the driving force behind the inclusion of the Shiona archaeological site in history textbooks. She is divorced from her husband, a journalist who works at Maichou Shimbun, and is raising their only daughter, Ako.

Tanabe Seiichi as Yukinaga Taichi
A detective of Okutama Kita Police Precinct’s Criminal Affairs Division. The discovery of human bones leads him to reopen the investigation into the case of a kidnapped high school girl which he was in charge of 13 years ago.

Tanaka Kei as Baba Yoshiaki
An assistant with the non-profit organisation, Old Stone Lab. A researcher who helps in the Kuwami Village dig under Kamimura Kensaku.

Jinnai Takanori as Sawatari Zenzo
The deputy director of the Ministry of Education, Culture, Sports, Science and Technology’s Archives Agency. Like his junior Kamimura Kensaku, he was a pupil of Hiyama Eijiro. Although he is envious of Kamimura’s activities, he watches over him.

Kitaro as Kunimatsu Gentaro
The representative of Kunimatsu Institute of Archaeology. He advocates a theory that is counter to Hiyama Eijiro’s and claims that Kamimura Kensaku staged his discovery.

Tsukayama Masane as Hiyama Eijiro
The honorary chairman of the Japan Archaeology Association. The teacher of Kamimura Kensaku and Sawatari Zenzo. An authority in Japan’s archaeological circles.

Iwasaki Hiromi as Yonematsu Saeko
The older sister of the high school girl who was kidnapped 13 years ago. She is bewildered by the sudden reinvestigation due to the discovery of remains.

This blog contains information and musings on current and upcoming Japanese dramas but is not intended to be comprehensive.
View all posts by jadefrost →
This entry was posted in Winter 2014 Dramas, WOWOW and tagged Chi no Shio, Matsuyuki Yasuko, Oizumi Yo, Tanabe Seiichi, Tanaka Kei. Bookmark the permalink.