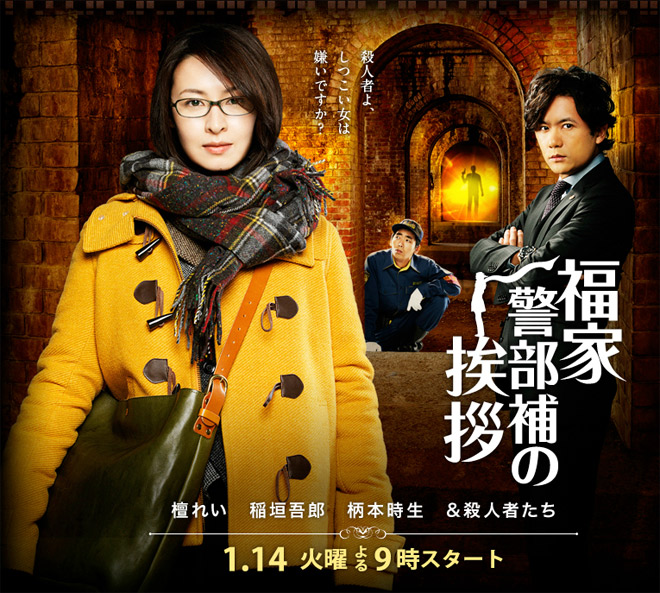 Story
Popular scriptwriter Todo Masaya calls aspiring actor Mimuro Kanji to his own holiday villa. Mimuro has the gun and rope which Todo requested ready. Todo casts Mimuro in the role of a kidnapper and he starts to get into the role. However, a short time later, Todo puts him to sleep with a drink spiked with sleeping pills. While Mimuro is asleep, Todo calls his own office. When his staff Oshiro Kanako answers, he replays the threat that he had made Mimuro read and recorded. Next, Todo goes to the home of the antique dealer Tsuji Nobuhiko. Tsuji proposes a transaction of an old manuscript to Todo. The script is a threat to Todo’s career as a scriptwriter and the past he has sealed away which he does not want anyone to know. Todo pretends to accept. Then he murders Tsuji, sets the house ablaze and returns to his holiday villa. At that moment, Inspector Ishimatsu Kazuo and police officers are on duty at Todo’s office. Another threatening phone call comes in. Kanako recognises that the voice of the caller is Mimuro. After the phone call ends, Todo rouses Mimuro. This is all a part of his scheme for the perfect crime. The finishing touch is snuffing out Mimuro. Learning about this, Mimuro loses his head and attacks Todo. During their scuffle, a bullet that Todo fired penetrates Mimuro. After that, the police rush in but do not suspect an injured Todo of staging his own kidnapping to create an alibi and making it look like he killed Mimuro in self-defence. With the exception of one person, Assistant Inspector Fukuie. Fukuie is put in charge of Tsuji’s arson-related murder by Ishimatsu, but she for some reason begins by investigating Todo’s kidnapping. However, Ishimatsu ignores her suspicions because of Todo’s alibi. Fukuie makes Nioka Tomonari of Forensics drive the car to Todo’s holiday villa.

Characters
Dan Rei as Assistant Inspector Fukuie
A female detective who is perceived to be an outsider because she does not look like an assistant inspector. She has a sharp nose for solving cases. Once she starts an investigation, she takes no notice of anyone as she searches for the key to find out the truth. She does not care for the hierarchy of the organisation or career advancement. If she has doubts, she will not listen to her superior and will persist in investigating in her own way until she is satisfied. She lulls the other party into a false sense of security with her easygoing presence and gets close to the truth.

Inagaki Goro as Inspector Ishimatsu
Assistant Inspector Fukuie’s boss. A serious, non-career inspector who worked his way up the ranks. He places importance on the organisation and discipline, is rigid and strait-laced. Ever since Fukuie became his subordinate, his pride has been in tatters because she loves to disregard his instructions and investigate on her own even though this eventually results in success and he gets credit for her achievements. His principle is to investigate using orthodox methods, but the results that Fukuie delivers goes against this and makes him feel ashamed.

Emoto Tokio as Nioka Tomonari
A member of the crime lab. He is pressed by Assistant Inspector Fukuie to go beyond his professional duties. He will say “Please spare me”, but in the end he will help her and anger his bosses. A part of him unconsciously respects Fukuie.

This blog contains information and musings on current and upcoming Japanese dramas but is not intended to be comprehensive.
View all posts by jadefrost →
This entry was posted in Fuji TV, Winter 2014 Dramas and tagged Dan Rei, Fukuie Keibuho no Aisatsu, Inagaki Goro. Bookmark the permalink.