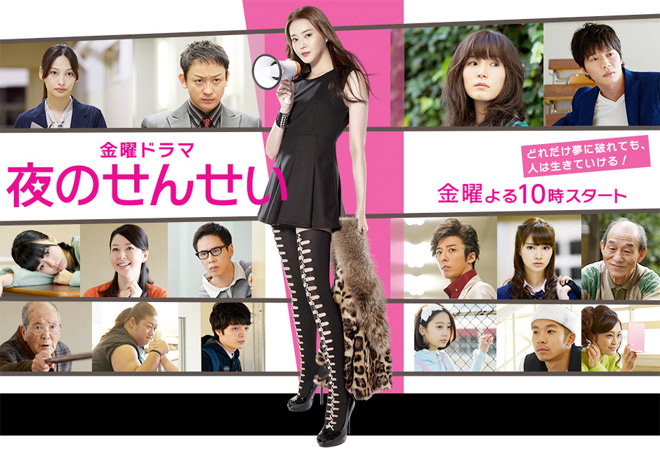 Story
38-year-old Yoruno Sakura, who encountered numerous repeated setbacks in life and drifted from one job to the next, has been the proprietress of the bar ‘Limelight’ in the outskirts of Tokyo these 10 years. This is her true calling where her varied life experiences count. However, a turning point suddenly presents itself. Sakura is rather aggressively scouted by one of her regular customers Sunagawa Makoto and becomes a teacher at a part-time high school under the terms that she will be fired immediately if anyone drops out of her class. Of all things, the class that she is takes charge of are a group of problematic students. Kuroi Hana, Osawa Yudai, Jobu Shunsuke and others are students of different age groups as well as backgrounds. It will not be strange if they quit since they all have one or two quirks. However, Sakura declares that she will definitely hold onto them. She gets herself involved in all sorts of matters and tries to thoroughly engage her students … … Just after Sakura takes up her position, a notice about a combined choir competition with the daytime class comes along. She forces her students to participate. But in the midst of this, a leaflet about the combined choir competition which had been pasted on the notice board, is practically torn by someone. The students of the day session see this and some gossip swirls among them. On the other hand, Hana is made the conductor of the choir competition because of Shunsuke’s incorrect remarks. A worried Hana goes to absurd lengths … …

Characters
Mizuki Arisa as Yoruno Sakura
She grew up in a strict family with a father who is a university professor. Because she feels inferior to her two accomplished older sisters and that she was abandoned by her mother, she rebels against her father and siblings and has lived a wild life. After barely graduating from a fourth-rate university, she drifted from one job to the next in the nightlife business and eventually settled down in the role of a proprietress at a bar in Nishi Kamata. One day, a regular customer Sunagawa Makoto learns about her previous aspiration to be a teacher and teaching qualifications, and scouts her for Hinode Academy. She teaches in the part-time high school for the first time at the age of 38. Her motto is “No matter how much a dream is shattered, a person can live on.” Although she is overly friendly, insensitive, sloppy and irresponsible, she is a kind person who is instinctively quick to detect and to help people who have dreams.

Renbutsu Misako as Kuroi Hana
She used to attend Hinode Academy’s daytime class and her grades were also outstanding. But some incident caused to her to be socially awkward. She practically develops a fear of other people and shuts herself in. However, at 20 she makes up her mind to re-enroll in the part-time school system. She is naturally a late bloomer in love and because of that, her fevered imaginations inflate like hot-air balloon. She loves the boys love subculture and the fantasies in her head are amazing.

Yamamoto Koji as Osawa Yudai
A shadowy man who exudes an aura of mystery. No one knows his true identity. He is taciturn and does not try to interact with anyone.

Tanaka Kei as Jobu Shunsuke
A native of Nagano Prefecture, he is a high school dropout. He finds meaning in creating chaos in class. A self-proclaimed real estate agent, he schemes to combine money and make money in anything.

Omasa Aya as Uena Runa
The mathematics teacher and assistant form teacher of Class 4/1. The typical elite teacher who is a graduate of a top university. However, she happened to come to the part-time high school because of a job reshuffle. She regards this school as a temporary arrangement and has nothing to do with the students. She only thinks of school as a place to study, and is the Yoruno Sakura’s adversary, the “ice woman”.

Mitsuishi Ken as Sunagawa Makoto
A regular customer at the bar where Yoruno Sakura is the proprietress. The grandson of Hinode Academy’s founder Sungawa Zenjiro and the high school’s vice principal. He sees the qualities of a teacher in Sakura’s personality and scouts her to be a part-time teacher. He speaks to her in a casual manner and supports her.

Nakahara Takeo as Yanagishima Takehiko
The principal of Hinode Academy. He always plots to abolish the part-time school system and tries to push it toward closure on some sort of pretext. He has a low opinion of the vice principal Sunagawa Makoto who is a fixture at the school only because he is the founder’s grandson.

This blog contains information and musings on current and upcoming Japanese dramas but is not intended to be comprehensive.
View all posts by jadefrost →
This entry was posted in TBS/MBS, Winter 2014 Dramas and tagged Mitsuishi Ken, Mizuki Arisa, Renbutsu Misako, Tanaka Kei, Yamamoto Koji, Yoru no Sensei. Bookmark the permalink.