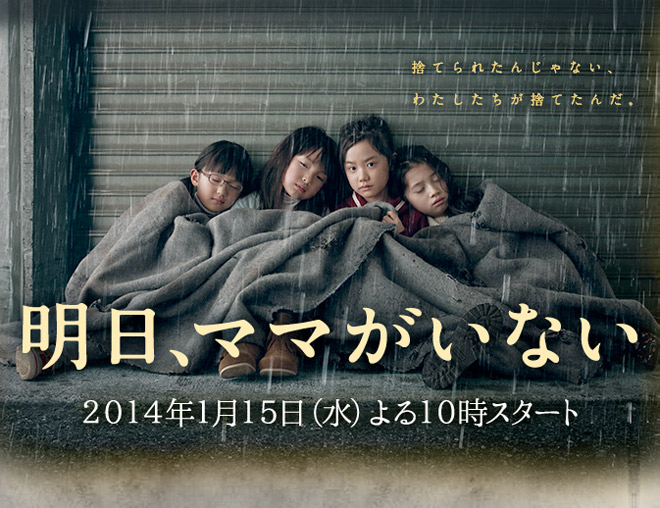 Story
9-year-old Maki is placed with a children’s orphanage because her mother Ryoka has been arrested by the police for assaulting her boyfriend. She is handed over by Mizusawa Kana, a staff of the Children’s Consultation Office, to a scary-looking Sasaki Tomonori and brought to an orphanage called Kogamo no Ie. Sasaki is the director of the orphanage which has a disquieting atmosphere. Maki meets three girls of the same age at the room that she is shown to. The girls are all no longer able to live with their biological parents for various reasons and call each other by queer nicknames instead of their real names. Piami because she is good at the piano. Bonbi because her family is poor. And then there is the girl called Post who has a commanding presence and is the leader of the children. When Maki learns that Post got her name from the baby hatch she was placed in shortly after her birth, she is lost for words. Piami and Bonbi are curious about Maki, the newcomer. On the other hand, as Post learns about the circumstances behind Maki’s arrival at Kogamo no Ie, she offers blunt words to her. They have cast away everything they received from their parents including their pasts as well as their names. Even if they constantly think about their parents, there will be no happiness. She advises Maki to leave the past behind. Maki is shocked by Post’s behaviour and protests. The children wish for good foster parents to adopt them and happiness with their new families, but Maki feels something wrong with this and wonders if this is the true happiness they are looking for. She is the only one who believes that her mother will come for her. The next day, a couple wishing to adopt Post shows up. There is a “trial” period where the child will spent time at the home of potential foster parents on a few occasions to see if they can be a real family until the foster parents’ adoption is determined. Post spends the “trial” period at the home of the couple, Hosogai and his wife Harumi. It seems that the wealthy couple will make ideal foster parents, but … …

Characters
Ashida Mana as Post
A 9-year-old girl who lives at Kogamo no Ie. She was picked up just as she was put into the baby hatch and has been called Post ever since she came to the orphanage. There is something about her and the young girls rely on her emotionally. She does not mince her words and snaps at adults.

Suzuki Rio as Maki
A 9-year-old girl who is placed in the custody of Kogamo no Ie because her mother’s quarrel with a young man caused an incident. Although she is gradually drawn to Post’s strange charm, she is the only one who believes that her biological mother will come for her.

Watanabe Konomi as Bonbi
A 9-year-old girl who has been left in the care of Kogamo no Ie due to her parents’ financial difficulties. She has a quiet character and is given to wild imaginations.

Sakurada Hiyori as Piami
A 9-year-old girl who loves dressing up and chatting. She has a haughty tone. When she was a child, her favourite piano was left behind and her parents disappeared.

Miura Shohei as Locker
An alumnus of Kogamo no Ie who now works at the orphanage as a staff member. He is a mysterious person who never talks and his feelings cannot be read from his expressions. However, the young girls always open their hearts to him. He is the only person who knows about the past of the orphanage director Sasaki Tomonori.

Ohgo Suzuka as Otsubone
A 17-year-old girl who grew up at Kogamo no Ie since she was a child. She is treated like a grand dame by the other children. She is inwardly anxious that no one has appeared to take her yet.

Kimura Fumino as Mizusawa Kana
A staff member of the Children’s Consultation Office who appears cold-hearted. She joins hands with Kogamo no Ie’s director Sasaki Tomonori and finds foster parents for the children’s adoptions. These actions are related to her own circumstances. She actually wishes for the children’s happiness more than anyone else.

Shirota Yu as Tojo Yuki
A good-looking diplomat. He locates Bonbi and visits Kogamo no Ie. He becomes the ideal parent to the children of Kogamo no Ie.

Mikami Hiroshi as Sasaki Tomonori
The director of Kogamo no Ie. He is called the “Devil”. He imposes strict rules and punishment on the children, and treats them without affection. “You are like dogs in a pet shop,” he tells the children and trains them to be endearing so that they can be adopted by foster parents. He shouts abusive language and is hard on them. On the other hand, he is anguished inside. His past is shrouded in mystery.

Suzuki Sawa as ?
A mysterious woman who works at shop selling take-away meals.