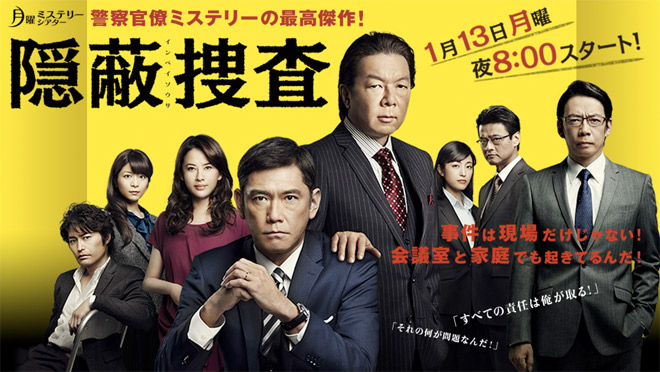 Story
Ryuzaki Shinya is a career bureaucrat who works for the National Police Agency. He heads the General Affairs Division of the Commissioner’s Secretariat and is in charge of the media relations of the agency which controls police officers nationwide. It can be said that Ryuzaki is the nerve centre of the national police. One day, a member of an organised crime group is shot dead with a gun. This was not brought up to him, the person in charge of the media, and he had to learn of the matter from the newspapers. Ryuzaki visits his childhood friend and the head of the Tokyo Metropolitan Police’s Criminal Investigations Department, Itami Shuntaro who joined the National Police Agency in the same year. Itami says he does not liaise with the Commissioner’s Secretariat on the reports which his department receives because of the turf battles within the National Police Agency. Although Ryuzaki is disgusted by the behaviour of the pesky nuisance that is the Criminal Investigations Department, Itami’s attitude also rubs him the wrong way. Itami would place his arm around Ryuzaki and get overly friendly with him each time while reminding him, “We’re childhood friends, aren’t we?” Ryuzaki would always tell him to knock it off and shake himself free. No matter what the two of them say about being childhood friends, Ryuzaki remembers being bullied by Itami and does not feel and friendship. However, he is ordered by his superior to gather information regarding this case and starts to act on his own. Kamijo Takahito, another fellow who joined in the same year, shows up before Ryuzaki and Itami. He is the most successful of their batch and a person who will do whatever it takes to achieve his goals. Ryuzaki is warned by Kamijo not to do whatever he wants. At home, Ryuzaki’s wife Saeko presses him to solve the problems of their son and daughter. However, Ryuzaki leaves domestic matters to her. He is fired up about his police career more than anything else. Meanwhile, a series of cases thought to be committed by the same criminal in the gangster’s murder occur and they are linked to a big case in the past. Actions are initiated within the agency in an attempt to cover up the shadows cast by police scandals related to that case. In the pursuit of justice, Ryuzaki, the utter rationalist, has no regard for rank or the pride of those at the top and bottom. He even gets Itami involved as he stands up alone to solve the case and the two of them are dragged into a big vortex … …

Characters
Sugimoto Tetta as Ryuzaki Shinya
The National Police Agency’s Director of the General Affairs Division of the Commissioner’s Secretariat. Rank: Commissioner. A graduate of Tokyo University and a career bureaucrat. He is in charge of the media. “A bad thing is a bad thing” and “The right thing is the right thing.” He dislikes the public stance and the real intentions, and sticks to sound arguments. He has no regard for rank or the pride of those at the top and bottom. He will obstinately uphold discipline, order as well as principles, and absolutely not do something illegal or secret. He clearly says what a regular person is unable to and implements things that cannot be done. Because of this, he is called an eccentric by the people around him. However, he personally does not think so. He and Itami Shuntaro have been childhood friends since elementary school days but he holds a grudge against Itami for bullying him when they were kids. He stands up against the top brass which intends to cover up the truth about some case.

Furuta Arata as Itami Shuntaro
The head of the Tokyo Metropolitan Police’s Criminal Investigations Department. Rank: Commissioner. A graduate of a private university and a career bureaucrat. He is Ryuzaki Shinya’s childhood friend.
In contrast to Ryuzaki, he is jovial and affable. Aware that he is a weak person, he tries not make enemies. He is tactful about what he truly thinks, and is always conscious of the eyes around him in his actions. A hands-on person, he will take charge of important cases by being on the ground. He can be flexible in his response. He is always told by Ryuzaki that he bullied him, but he has not such recollection. He is living apart from his wife now. He wavers between the top brass which tries to cover up the truth in a case and Ryuzaki who intends to divulge it.

Yasuda Ken as Todaka Yoshinobu
A detective of the Tokyo Metropolitan Police Department’s Omori Kita Police Precinct. He is always sour-looking and cynical, and at times haughty too. Rank: Sergeant. Although he has a bad work attitude, he has an exceptional nose for crime and a superior investigation intuition. He is difficult to deal with as a subordinate, but he delivers results. He and Ryuzaki Shinya identify with each other in some ways.

Namase Katsushisa as Kamijo Takahito
The National Police Agency’s Director-General of Policy Matters of the Commissioner’s Secretariat. Rank: Superintendent General. A graduate of Tokyo University. He joined the police in the same year as Ryuzaki Shinya and Itami Shuntaro, but his rank is high than theirs. He has an extraordinarily quick mind and is good with people. He thinks that rank is everything for a career bureaucrat. He and Ryuzaki are similar in this respect. However, he is even more fixated on moving ahead in his career than Ryuzaki, and has in all seriousness set his sights on being the chief of the agency. Because he gives great weight to the logic of the police organisation and would at times do whatever it takes, he is often at odds with Ryuzaki and Itami. He will not hesistate to cover-up for the sake of the police organisation as well as career advancement.

Suzuki Sawa as Ryuzaki Saeko
Ryuzaki Shinya’s wife. She is aware that the job of a wife is to safeguard the family. Although she is frustrated with her husband for leaving the family to her, she actually understands his position, and is a dutiful wife and devoted mother. She would encourage him to work for the country at every turn.

Mikura Mana as Ryuzaki Miki
Ryuzaki Shinya’s daughter. Like her mother, she is amazed by her father’s “eccentricities”, but is similar to him in some respects. She is an obstinate person. She is dating the son of her father’s superior from the time he was at the Osaka Prefectural Police.

Sano Reo as Ryuzaki Kunihiko
Ryuzaki Shinya’s son. Because of his father’s wish that he attend no other university but Tokyo University, he ends up failing to enter university even though he has qualified for famous private ones. His father is an intimidating presence and it is difficult for Kunihiko to talk to him face to face.

This blog contains information and musings on current and upcoming Japanese dramas but is not intended to be comprehensive.
View all posts by jadefrost →
This entry was posted in TBS/MBS, Winter 2014 Dramas and tagged Furuta Arata, Suzuki Sawa, Yasuda Ken. Bookmark the permalink.