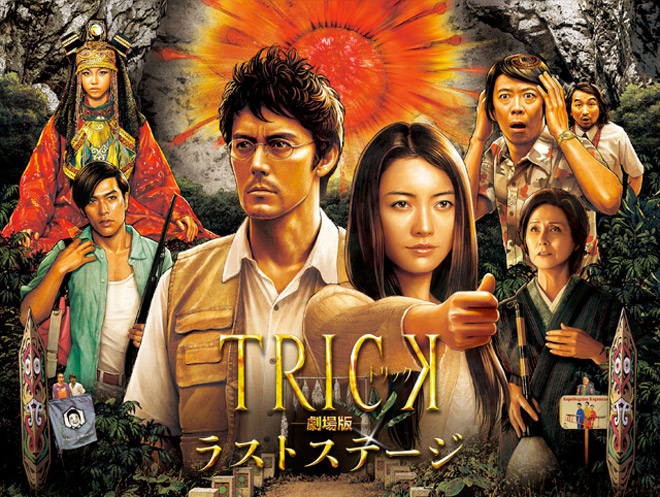 Broadcast
In theatres on 11 January 2014

Story
One day, Kagami Shinichi, an employee of Murakami Trading’s Rare Earth Division, appears before self-styled genius physicist Ueda Jiro. He requests for Ueda’s help in order to mine rare earth at a secluded region overseas. Kagami has acquired the mining rights for the rare earth, but he is in a fix because the tribe living in that area refuses to move out. The shaman, which the tribe believes, in says that the sacred land cannot be handed over to other people. She can read the future and put a deadly curse on someone with the occult powers she possesses. Kagami asks Ueda to unlock the myster of her powers. If Ueda is able to see through her tricks and make the tribe clear out, Kagami proposes to fund his research. Ueda enlists the help of the self-styled very popular, gifted and beautiful magician Yamada Naoko as usual. He naturally hides the fact about a showdown with a horrifying shaman and merely hints at having to go overseas to do something. As anticipated, Naoko is drawn to her first trip abroad and willingly accompanies him. When they arrive, not only the doctor Tanioka Masahi, who used to research infectious diseases at a university hospital, but Detective Yabe Kenzo also link up with them. With Kagami as their guide, the group sails upstream and heads for the hermetic village in the depths of the jungle. Each person attempting to obtain the rare earth lying beneath the village is cursed to death one after another, and then the curse is finally placed on Ueda and Naoko too.

This blog contains information and musings on current and upcoming Japanese dramas but is not intended to be comprehensive.
View all posts by jadefrost →
This entry was posted in Movies and tagged Abe Hiroshi, Higashiyama Noriyuki, Kitamura Kazuki, Nakama Yuki, Namase Katsuhisa, Nogiwa Yoko, Trick Series, Yoshida Kotaro. Bookmark the permalink.