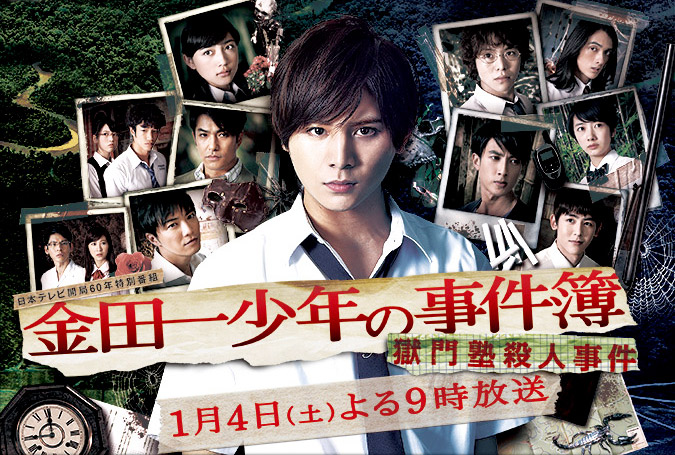 Date: From 9.00 p.m., 4 January 2014
Cast: Yamada Ryosuke, Kawaguchi Haruna, Arioka Daiki, Wu Zun, Nichkhun, Narimiya Hiroki, Kitamura Kazuki, Haru, Kurihara Rui, Miyoshi Ayaka, Ryu, Lin Bo Hong, Jeannie
Synopsis: Kindaichi Hajime (Yamada Ryosuke), his childhood friend Nanase Miyuki (Kawaguchi Haruna) and junior Saki Ryuji (Arioka Daiki) join Gokumon Preparatory School’s summer training camp. The school’s main campus is in Taiwan and it is known to have a good track record. Saki participated in the camp last year too. The three of them visit Gokumon Preparatory School for a briefing on the training camp. At that moment, an emergency bell rings and a female’s screams can be heard. Kindaichi and the others rush over to the location, only to discover that a high school student called Moroi Ren is dead. There are small nicks and traces of blood on the fingertips of Moroi’s dead body. It turns out that Moroi died because his finger had been pricked by a needle smeared with poison. The police deduce that it was a random murder targeted at preparatory school students. However, Kindaichi explains that it was a premeditated murder targeted at Moroi. Meanwhile, Kindaichi meets detective Byron Lee (Wu Zun) again. They had solved the Kowloon treasure case together in Hong Kong last year. Detective Lee is after Takato Yoichi (Narimiya Hiroki), a criminal called Hell’s Puppeteer who is on the international wanted list. In recent years, Takato has carried out a series of unusual murders that have gone unsolved in different Asian countries. The Kowloon treasure case was also masterminded by him. A few days ago, a spooky marionette was sent to Detective Lee. The marionette had a riddle “Japan Gokumon Preparatory School Training Camp Game Death” and came with a letter bearing Kindaichi’s name. Because the method employed in the murder at Gokumon Preparatory School closely resembles Takato’s modus operandi, Detective Lee suspects Takato manipulated this. Kindaichi guesses that Takato is plotting a crime set in Gokumon Preparatory School as a challenge to him and heads to the training camp in Malaysia. When they arrive in Malaysia, they and the camp’s participants are divided into humanities and sciences. The location of the camp is a lodge in a jungle. The humanities participants are taken to the Sun Lodge while the sciences partipants are taken to Moonlight Lodge. Besides Kindaichi and Saki, the other humanities participants are Chen Zheng Long (Ryu), Shikibu Kiyoko (Miyoshi Ayaka), Nakayashiki Manabu (Maeda Goki), Kirisawa Toru (Kurihara Rui) and Hama Akiko (Haru). The sciences participants are Miyuki, Mei Suyin (Jeannie) and Lin Zhi Sheng (Lin Bo Hong). The teachers in charge of humanities are Dojima Kohei (Kasahara Hideyuki) and Akao Ichiyo. Akao’s face has a huge scar from a burn and he wears a scary mask. The teacher in charge of science is Ujie Takayuki (Kitamura Kazuki), who is also the person in charge of this camp. Detective Lee infiltrates the camp disguised as a temporary science teacher. On the second day of the camp, incidents happen. Students vanish one after another and a strange-looking dead body is soon found. Saki brings up the name of a former Gokumon Preparatory School student Ma Taichi (Nichkhun) in connection with this series of murders. Taichi, who had been the target of bullying, died mysteriously last year … … Thus the battle between Takato and Kindaichi ends like this … …
Official Website: www.ntv.co.jp/kindaichi-gokumon

This blog contains information and musings on current and upcoming Japanese dramas but is not intended to be comprehensive.
View all posts by jadefrost →
This entry was posted in NTV, Winter 2014 Drama Specials and tagged Kindaichi Series. Bookmark the permalink.