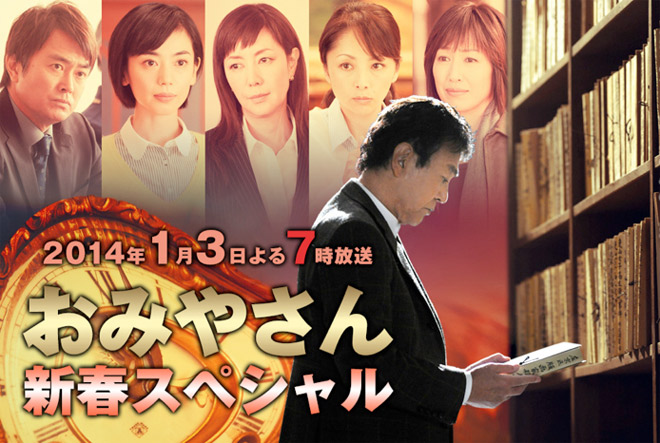 Date: From 7.00 p.m., 3 January 2014
Cast: Watase Tsunehiko, Takashima Reiko, Toda Keiko, Sakurai Atsuko, Kyono Kotomi, Nanase Natsumi, Fuwa Mansaku, Hayashi Yasufumi, Onodera Joe, Ichijo Satoshi, Washio Machiko, Ishiguro Ken (guest star), Suga Takamasa (guest star), Matsuzawa Kazuyuki (guest star), Asari Yosuke (guest star)
Synopsis: Terao Miki (Takashima Reiko), a section chief at Kyoto Prefectural Police’s First Investigative Division, takes a post at Kamogawa Higashi Police Precinct’s Documentation Division. Miki had solved a string of cases with her powers of reasoning and ability to get things done. She is highly regarded by the people around her too. Why would a First Investigative Division section chief come to a precinct’s documentation division? Midorikawa Midori (Toda Keiko), the head of the precinct’s Criminal Affairs Division, and her detectives gossip. Miki shows up and states flatly that she had applied for the transfer. She quickly attempts to start work, but Torii Kanzaburo (Watase Tsunehiko), the head of the Documentation Division, and Aizawa Keiko (Nanase Natsumi) of the crime lab have already gone out for an early lunch. Torii comes back with his arm linked in Keiko’s and says, “Let’s take it easy”. He ends up practising magic tricks at the desk. Miki is disappointed by Torii … … At that moment, a man called Mitsugi is killed by a gun. From the situation at the crime scene, the victim had been forced to hold the gun by the criminal. He appears to have pointed it at his head with his own hand and pulled the trigger. Miki, who has swiftly responded to the case, for some reason demands that Keiko do a proper search for the bullet. However, no bullet is found from the scene. Why does Miki care about the bullet at the first report of the case? Midori has misgivings about Miki’s reaction. In truth, Miki has a case that she is intent on solving and she wants to tap on Torii’s strength to catch the criminal. On the other hand, Torii reacts to the eucalyptus wood chips found from the crime scene. He stops practicing magic tricks, heads to the shelves of documents and reaches for materials on an unsolved case involving a policeman called Okada Kiyoharu (Asari Yosuke) who was shot dead seven years ago. What is the connection between this fatal shooting and the bizarre murder?
Official Website: www.tv-asahi.co.jp/omiyasan

This blog contains information and musings on current and upcoming Japanese dramas but is not intended to be comprehensive.
View all posts by jadefrost →
This entry was posted in TV Asahi, Winter 2014 Drama Specials and tagged Ishiguro Ken, Omiyasan Series, Toda Keiko, Watase Tsunehiko. Bookmark the permalink.