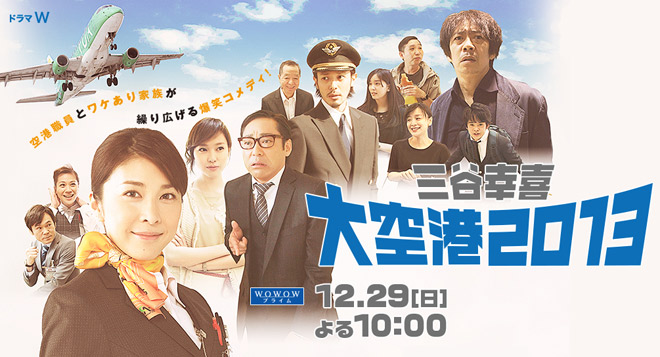 Date: From 10.00 p.m., 29 December 2013
Cast: Takeuchi Yuko, Odagiri Joe, Toda Erika, Kagawa Teruyuki, Namase Katsuhisa, Komoto Masahiro, Ishibashi Anna, Ikematsu Sosuke, Kanno Misuzu, Ayata Toshiki, Kajihara Zen, Aoki Sayaka
Scriptwriter: Mitani Koki (Kiyosu Kaigi, Wagaya no Rekishi, The Magic Hour)
Synopsis: The Tanokura family (Kagawa Teruyuki, Namase Katsuhisa, Ayata Toshiki, Ishibashi Anna, Ikematsu Sosuke, Kanno Misuzu) are on their way back to Tokyo from their hometown of Saga. However, they suddenly set foot at Matsumoto Airport in Nagano Prefecture as their aeroplane is unable to land at Haneda Airport due to bad weather. Okouchi Chigusa (Takeuchi Yuko), a ground staff at Matsumoto Airport who is fretting over how she should turn down a proposal from her boss Muraki Shigeru (Komoto Masahiro), attends to them. She starts to usher the six Tanokura family members including the lawyer Morio (Kagawa Teruyuki) to the second floor restaurant, but only Morio’s father-in-law Kiyomasa (Ayata Toshiki) insists on remaining at the waiting lounge. While they are waiting for a table at the restaurant, Morio makes Chigusa prepare a room in order to speak to the mysterious Kurashina Yuriko (Toda Erika), a woman who was on board the same flight, behind his family’s back. Meanwhile, Morio’s wife Miyoko (Kanno Misuzu) realises that the male pilot Kunikida Osamu (Odagiri Joe) whom she happened to meet is her childhood friend and her heart pounds at this serendipitous reunion. What she does not know is that Osamu is posing as a pilot. At that moment, Miyoko’s uncle Tsuruhashi Kuranosuke (Namase Katsuhisa), an investigative reporter who is in financial difficulty, is plotting for the umpteenth time to ask Morio for money … … The trouble that occurs soon sparks a big uproar.
Official Website: www.wowow.co.jp/dramaw/daikuko

This blog contains information and musings on current and upcoming Japanese dramas but is not intended to be comprehensive.
View all posts by jadefrost →
This entry was posted in Fall 2013 Dramas, WOWOW and tagged Daikuukou 2013, Kagawa Teruyuki, Mitani Koki, Namase Katsuhisa, Odagiri Joe, Takeuchi Yuko, Toda Erika. Bookmark the permalink.