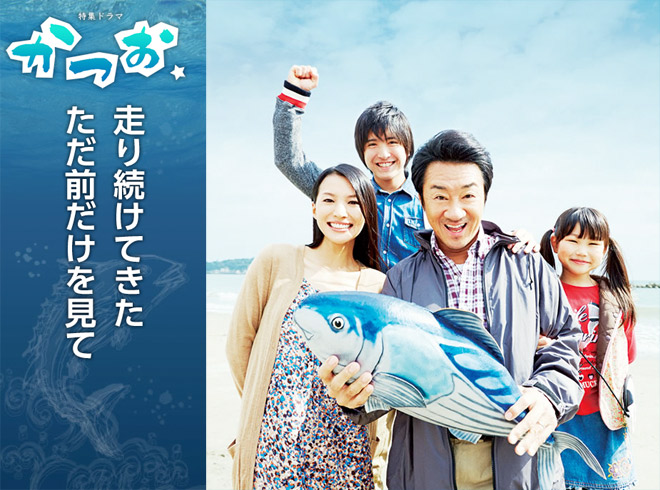 Date: From 7.30 p.m., 18 December 2013
Cast: Otomo Kohei, Ashina Sei, Minegishi Yuki, Furuta Uta, Endo Shozo, Suzuki Kyoka, Umezawa Tomio
Synopsis: Affectionately called Katsuo, former fisherman Yamamura Takeo (Otomo Kohei), is loved by his family and beach buddies. Although he is a scatterbrain, he has a lot of heart. Like the tuna which cannot breath if it does not keep on swimming, he lives life at a dead run and with a positive attitude. But behind his cheerful smile is the harsh reality that he faces. His wife Yukie (Suzuki Kyoka) was caught in the tsunami two years ago. She is still missing to this day. Unable to leave their son Yuki (Minegishi Yuki) and daughter Ranko (Furuta Uta) behind to die, Katsuo has given up going out to sea and works at a construction site which is surroundings he is unaccustomed to. His junior Shimada Koji (Endo Shozo) and others watch over this stout-hearted family of three. However, the family begins to change following the appearance of the mysterious and beautiful Takehara Shiori (Ashina Sei) who has come to Tohoku from Fukuoka. She starts a housekeeping service and comes to have access to the Yamamura’s house. Ranko who misses her mother gets attached to Shiori and demands attention while Katsuo himself seems as if he is fawning over her. On the other hand, Yuki fiercely protests against this. “Have you already forgotten about mum?”
Official Website: www.nhk.or.jp/sendai/drama

This blog contains information and musings on current and upcoming Japanese dramas but is not intended to be comprehensive.
View all posts by jadefrost →
This entry was posted in Fall 2013 Drama Specials, NHK and tagged Ashina Sei, Katsuo, Suzuki Kyoka. Bookmark the permalink.