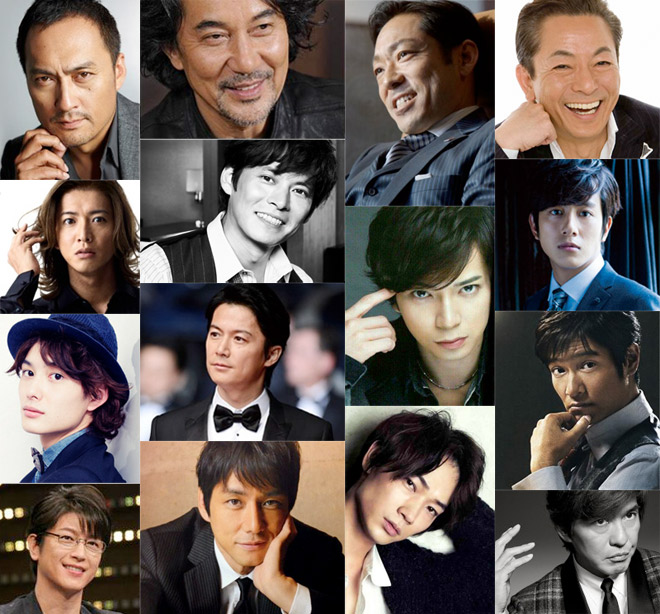 Top drama earners revealed … Flash has published a special magazine edition which lists the top earning actors and the potential TV ratings each one can draw. Potential ratings were tabulated from a random poll of viewers who were asked which actor’s appearance would make them watch TV. I’m surprised to see that Kataoka Ainosuke made it to the list for his exaggerated acting in Hanzawa Naoki. Some media watchers have noted with interest that the combined potential TV ratings that Sakai Masato, Kataoka and Kagawa Teruyuki can draw is 37.5% which is quite close to the high of 42.2% which Hanzawa Naoki hit. So they figure that Matsumoto Jun’s upcoming drama Shitsuren no Chocolatier should break 20%. It’s naive, silly logic.

Networks turn to detective, medical dramas in tough times? … The media has observed that at a time when big flops have become unpardonable and viewers are increasingly drifting away from TV networks, there will be a steady stream of similar programmes all following suit once there is a hit programme. Detective and doctor shows, “which owe their popularity to their realism and stand-alone episodes”, are probably excellent examples. But insiders lament that material on these two genres have already been exhausted. TV people are searching for new original works and scripts and getting panicky. “Although budgets have been scaled back lately, low ratings are unacceptable. Risks can no longer be taken like in the past. So no matter how the channels adjust, they all have the same sort of programmes. Because detective and doctor shows can score solid ratings, the present mood is to do this if the need arises. Should success be achieved on the first try, producing a sequel will also be easy.” I don’t think the solution will be to half-heartedly crank out more detective and doctor dramas with acting, pairings or storylines so bland and typical as to be entirely forgettable, cast more JEs or revive old hits. Networks should have a healthy respect for the audience, remember there is such a thing as viewer fatigue and let us keep our good memories.

Drama production crews get demoted too because of low ratings … TBS has announced that it will pull the plug on its drama Otto no Kanojo after eight episodes because of low ratings. It also acknowledged that the drama, which was intended to target the younger generation, did not turn out as expected. Someone familiar with the network said that the general rule for current dramas is not to make the total number of episodes for broadcast known to the public beforehand. This is, in a way, a preventive measure against having to say that it is being discontinued due to low viewership ratings. If a drama cannot get the numbers, it will be necessary to explain to senior management and after that its fate will be determined. Contrary to expectations that a network might take responsibility for the low viewership ratings, the practice of laying the blame on the contractors still prevails. The network is prepared not to contract with production companies which cannot make the numbers. After this, the prospects for the cast and production staff will come under scrutiny. According to a TBS production staff, producers and writers are generally spared responsibility for low ratings once. However, the second time in a row, they will find it hard to get their proposal passed and the budget will also be lower. That said, it is apparently another matter if a drama is a record failure. In the case of Fuji TV’s 2012 drama, Kazoku no Uta, which was scheduled to have 11 episodes but cut to eight episodes, the two network employees involved in drawing up the proposal were dropped from production and transferred to the pay TV business and public relations departments. Staff in last year’s Taira no Kiyomori, which recorded an all-time low in average viewership ratings for a NHK taiga drama, were relegated too. This time, the producer of Otto no Kanojo is not a TBS employee and Horipro staff are the ones taking the lead in the production. It is said that the agency fears that joint productions with TBS will be fewer as a result of the low viewership ratings and the network cannot be convinced unless Ayase Haruka or Tsumabuki Satoshi, who both belong to Horipro, appear.