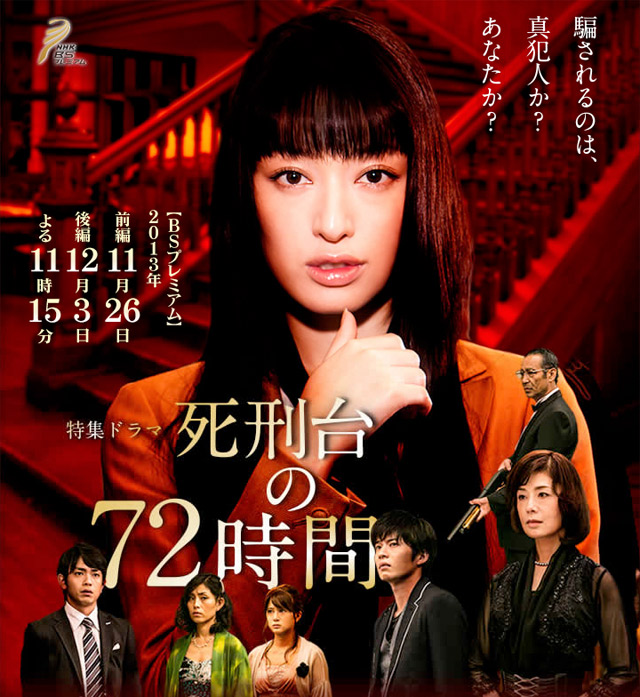 Story
28-year-old Natsuki Kiriko is a medical representative who works for a drdug company. One day, she receives an invitation card to Usui Toru’s memorial service. Kiriko is an ex-colleague of Usui who committed suicide by burning charcoal briquettes in a car three years ago. She gets invited to the ‘Orchard House’ which is a remote, towering western-style building deep in the mountains. When she goes inside, there are four other men and women. Each of them connected in some way to the late Usui Toru – Himura Takaaki, the president of a game company; Nikaido Satoshi, a doctor with a close relationship to Kiriko’s company; Takayanagi Mayumi, the wife of Usui’s direct boss; and Matsubara Yuka, Usui’s fiancee. Then Kaoru, the owner of Orchard House, appears in a black dress. “My son Usui Toru did not commit suicide. He was killed by someone among the five of you!” she proclaims. “Who killed my son?” she presses the five of them. When they reject her accusation as being ridiculous, she tells them, “If no one comes forward to confess, all five of you will have to die” and disappears. Her warning turns into reality. The five turn into prey in the next 72 hours as they start getting shot dead one by one and the real culprit is whittled down to three. In order to survive, Kiriko, Himura and Nikaido blame each other. Faced with the fear of impending death, they lay bare the truth. When the outline of the incident gradually emerges, the situation takes an unexpected turn.

Characters
Kuriyama Chiaki as Natsuki Kiriko
A medical representative who works at a drug company. This is her sixth year in the company. She and the late Usui Toru were colleagues. She is hardworking and serious, and has a strong sense of responsibility. Because of her competence, she is put in charge of work and her days are busy. However, she remains traumatised about hurting a good friend in the past.

Aoyagi Sho as Nikaido Satoshi
A hospital doctor who has close ties with the drug company that Natsuki Kiriko works for. Usui Toru was his medical representative. He also knows Kiriko by sight.

Machida Mari as Takayanagi Mayumi
An ordinary housewife who has two children. Her husband is Usui Toru’s direct boss. She and Usui are acquaintances.

Satsukawa Aimi as Matsubara Yuka
Usui Toru’s fiancee. She works at a flower shop. She feels responsible for his suicide.

Tanaka Kei as Himuro Takaaki
The president of a game company. The company that he started on his own has grown into a big business that now generates 1 billion yen in annual sales. He and Usui originally worked at the same game company and were good friends.

Sugata Shun as Aizawa Yutaka
Orchard House’s taciturn butler. He staunchly obeys Kaoru’s orders and starts to eliminate the suspects in Usui Toru’s murder one after another.

Daichi Mao as Kaoru
The owner of Orchard House and mother of the late Usui Toru. She is deeply suspicious of the cause of her son’s death and gathers the five people close to him at Orchard House.

This blog contains information and musings on current and upcoming Japanese dramas but is not intended to be comprehensive.
View all posts by jadefrost →
This entry was posted in Fall 2013 Dramas, NHK and tagged Kuriyama Chiaki, Tanaka Kei. Bookmark the permalink.