From this week, we’ll be starting a new column that will carry news from various Japanese media outlets on dramas currently on air. This might be regular, or not … … depending on what catches our attention. 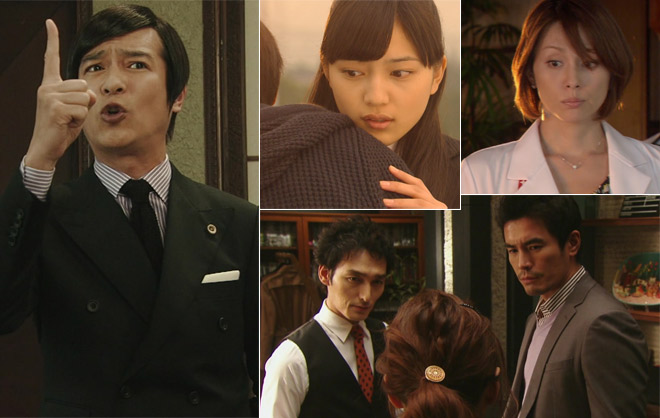 Legal High’s next season to be a period piece? … Legal High’s producer Narikawa Hiroaki tells the media that he would like to do a period piece for the third season of Legal High if there is another sequel for the drama. He thinks something in the vein of the Ultraman Series will be good so that Komikado Kensuke and Mayuzumi Machiko can have a shot at a variety of things each time. In his imagination, Komikado will be the third son of a vassal to the shogun while Mayuzumi will be the damsel in distress that he bumps into when walking through town and Miki Choichoro will be a wicked government official.

Yonekura Ryoko says no to a third season … Yonekura Ryoko and her agency Oscar Promotion have requested that Doctor X ~ Gekai Daimon Michiko come to end this season. Her side has declared that she will not appear in another season despite “frantic persuasion” on TV Asahi’s part. There is speculation that there may be a barter of sorts so that Takei Emi and Goriki Ayame, who both belong to the same agency, may land leading roles in dramas. The drama’s popularity with the audience has more to do with what Daimon Michiko embodies and the plot than Yonekura herself. I can’t say that she has defined the role of Daimon. She certainly has more wardrobe changes than feelings that she can emote in an episode. While I’m not going to miss Yonekura, I’m also not keen for even more Takei or Goriki.

Yamashita Tomohisa’s appearance with Kitagawa Keiko has no effect on ratings … Yamashita Tomohisa made a guest appearance on episode 7 of Dokushin Kizoku as the lead actor for Haruno Yuki’s Hachigatsu no Bolero. The media speculate that this was part of the production’s calculated attempt to create buzz that would lift the drama’s ratings. But the reunion of the one-time couple, who were reported to have been dating around the time of Buzzer Beat, did not have the intended effect. Ratings were just 0.3% higher than the previous episode. I gave up watching Dokushin Kizoku after a few episodes. There’s no movie magic, no chemistry between the pairings and Kusanagi Tsuyoshi’s Hoshino Mamoru hasn’t an ounce of charm of the other prickly, eccentric man who didn’t want to get married, Kuwano Shinsuke.

Otto no Kanojo viewership ratings hits a low of 3% … The TBS drama recorded the lowest ratings for a prime-time drama in the present century in its latest episode and young lead actress Kawaguchi Haruna unfortunately finds herself in a hot seat. Otto no Kanojo was meant to have been a step up for her but has performed poorly since its premiere. Some media attribute this to Kawaguchi’s agency Kenon’s hastiness to land her a leading role in a prime-time drama before Nounen Rena even though she had expressed a desire to act in a variety of roles. (Both Kawaguchi and Nounen apparently started out modelling for the fashion magazine Nicola around the same time.) The production did not anticipate good ratings competing in the shadow of TV Asahi’s Doctor X and could not make up its mind on its lead actress. It was at this point that Kenon appears to have pushed her in.

This blog contains information and musings on current and upcoming Japanese dramas but is not intended to be comprehensive.
View all posts by jadefrost →
This entry was posted in Drama Digest, Fall 2013 Dramas and tagged Doctor X, Dokushin Kizoku, Legal High, Otto no Kanojo. Bookmark the permalink.