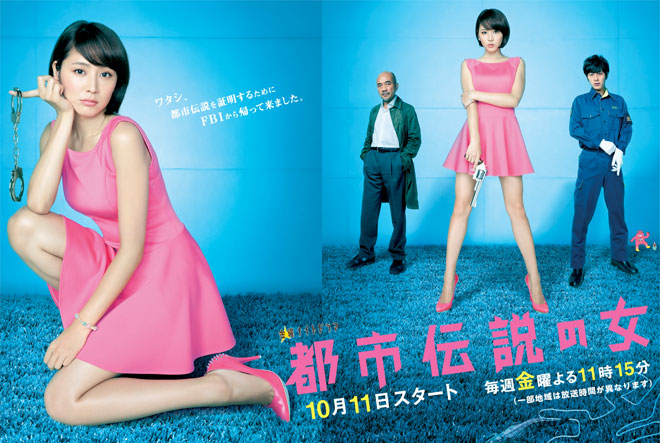 Story
Detective Otonashi Tsukiko, the Toshi Densetsu enthusiast who went to New York following a sudden and unprecedented secondment from the Tokyo Metropolitan Police Department’s First Investigative Division, returns to Japan temporarily. Her purpose is to attend a symposium which will talk about Toshi Densetsu relating to Mt Fuji. She immediately heads for the foot of Mt Fuji where the venue is. Then, Take Shigeharu who has just become the police commissioner appears. Take has set up the Unscientific Incidents Investigation Unit, or UIU for short, within the police organisation and appointed Tsukiko’s boss Tannai Ichio to head the unit. He has done this so that Tsukiko can pursue cases connected to Toshi Densetsu across the country. Tsukiko decides to return to the Tokyo Metropolitan Police Department now that the cases can be investigated more openly than ever before. At this moment, a case occurs. On the morning of the symposium, the dead body of UMA researcher Nakano Shuji is discovered on the shore of Lake Motosu. Nakano was scheduled to announce the truth of Mt Fuji’s mystery which he had arrived at after 25 years. There are signs on the ground which indicate that Nakano’s body had been dragged and in the direction of dense foliage. Furthermore, there is a puzzling red ancient character on Nakano’s palm. Tsukiko, who found the dead body, checks the situation and is certain of one thing. “This case is connected to Mt Fuji’s Toshi Densetsu!” Nakano had been studying a great number of eyewitness accounts at Lake Motosu. Could the truth that he was about to announce at the symposium be about the secret village that is off the map where people who could not complete their suicide are rumoured to live? Tsukiko starts investigating at once and even forensics officer Katsuura Hirohito gets involved. At Nakano’s apartment, they find that only one entire month out of the 25 years of diary entries that he has kept, is missing. Meanwhile, an eyewitness gives an account about an argument with childhood friend Yasuda Takashi a few days before Nakano’s death. Tannai deduces that there was a love triangle with Nakano’s fiancee Onishi Kyoko. He guesses that it was a murder because of an entangled relationship. However, Tsukiko stubbornly continues to investigate the connection to Toshi Densetsu. Seeking clues, she eventually sets foot in the forest but … …

Characters
Nagasawa Masami as Otonashi Tsukiko
A detective with the First Investigative Division. A Toshi Densetsu enthusiast who openly declares that she became a detective in order to bear testimony to Toshi Densetsu. She believes that every case is connected with Toshi Densetsu and because of that, she thinks that the greater part of formal investigations are wrong. She will covertly proceed to probe them with Toshi Desetsu as the theory by feigning illness. This angers her superior, Tannai Ichio each time. Because she is too beautiful, she has been pampered and cosseted by most men, She is a natural at cajoling people and makes use of this ability in investigations to get parties involved in cases to open their hearts and secretly let her into places that are out of bounds. She dreams of officially announcing some day that Toshi Densetsu is involved in a case she investigated.

Mizobata Junpei as Katsuura Hirohito
A forensics officer. After being at a local police station’s forensics department, he was transferred to the headquarters last April. He fell in love at first sight with Otonashi Tsukiko whom he encountered at a crime scene. In order to accommodate Tsukiko, he struggles to talk about Toshi Desetsu, but because his knowledge is superficial, he cannot quite keep up. It is Tsukiko’s looks that he is in love with. As long as it is for Tsukiko’s sake, he will take the initiative and keep her company even in absurd investigations. He has excellent memory and is well-organised, but cannot tolerate objects in disarray and goes a little too far in tidying crime sccenes. Every day, he battles with inner conflict over his worthiness to be a forensics officer. After Tsukiko was seconded to the FBI, he has been lonely and sad, but perks up at her return to Japan this time.

Takenaka Naoto as Tannai Ichio
A detective with the First Investigative Division and head of the UIU. Otonashi Tsukiko’s boss. He had solved many difficult cases with his sharp detective instincts over the years … … But those instincts have also been off the mark, to the extent that the people around him have been quietly gossipping that “Tannai’s intuition has slipped” … … In the midst of this, Tsukiko joined his team and his performance improved for a while because of her efforts. However, the moment that she was seconded to the FBI, his performance plunged again. But on this occasion, he is appointed to head the newly established UIU with Tsukiko’s return to Japan.

Hirayama Hiroyuki as Shibayama Toshiya
A detective with the First Investigative Division and member of Team Tannai. He idolises Tannai Ichio who was once said to be a famous detective. He is bewildered by the nonsensical investigation methods of his junior, Otonashi Tsukiko, but always finds great joy in working alongside Tannai. His respect for Tannai remains unchanged even though Tannai’s performance has dropped once again.

Okubo Kayoko as Takada Junko
A forensics officer of the Tokyo Metropolitan Police Department. She has recently been assigned to the crime lab and becomes Katsuura Hirohito’s new boss. She has a overbearing personality and thinks highly of her own appearance for some reason. Katsuura is her target and she attempts to get near him with seductive overtures. Because Katsuura is deeply in love with Otonashi Tsukiko, she has not succeeded. When Tsukiko returns from the FBI, she burns with sense of rivalry. She must not lose Katsuura to her.

Takuma Takayuki as Gohara Yuichi
The leader of the First Investigative Division’s Team Gohara. An ace detective described as the most capable man in the First Investigative Division. Unlike Tannai Ichio who has gone through a lot of ups and downs in the job, he is always assigned the main work. He likes Otonashi Tsukiko’s herself and supports her activities, but he is chilly towards the policies and investigations of the UIU, the new team that Tsukiko belongs to.

Ibu Masato as Take Shigeharu
The commissioner of the Tokyo Metropolitan Police Department. He and Otonashi Tsukiko call each other “Tsukiko-chan” and “Take-chan”. It is not clear how he and Tsukiko got connected … … He was the deputy commissioner but has been promoted. He set up the UIU to unravel the mysteries of cases which are connected to Toshi Densetsu across the country for Tsukiko’s sake.

This blog contains information and musings on current and upcoming Japanese dramas but is not intended to be comprehensive.
View all posts by jadefrost →
This entry was posted in Fall 2013 Dramas, TV Asahi and tagged Ibu Masato, Mizobata Junpei, Nagasawa Masami, Toshi Densetsu no Onna. Bookmark the permalink.