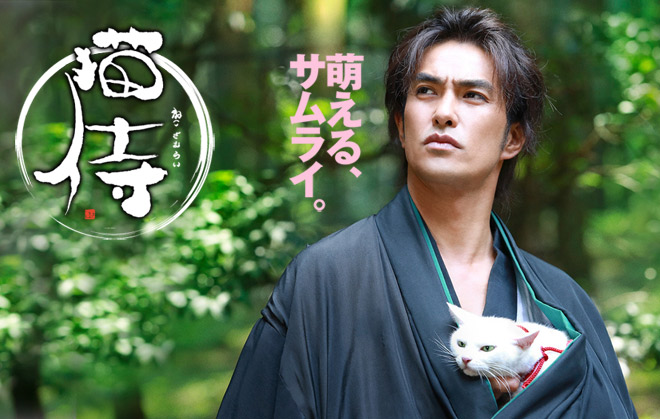 Story
Madarame Kyutaro is a former instructor of swordplay of the Kaga domain. A once-feared swordsman called the “speckled demon”. Now, he lives a quiet life alone in a tenement house as a poor, plain old wandering samurai. Because Kyutaro does not know how to earn money without his sword, he is impoverished and fishes for a dinner of crayfishes as he casts a sidelong glance at a donuts food cart. Meanwhile, Sakichi, the clerk at the fabric wholesale merchant Kagaya who had happened to see Kyutaro’s swordsmanship, asks Kyutaro to assassinate the white cat Tamanojo which has mesmerised Yozaemon, the master he loves and respects. According to Sakichi, his strait-laced master has become like a child since he started to keep Tamanojo. It is a cat with magical powers that his master has fallen for and Sakichi wants to make sure the demon is vanquished. Kyutaro frowns at the absurdity of his words and turns to leave. However, it is another matter when he is offered a reward of 3 ryo. With Sakichi’s help, Kyutaro slips into Tamanojo’s room at Kagaya that night. In search of the cat with magical powers, he opens one sliding screen and then the second. When Kyutaro opens the third sliding screen, there is a white cat in an ultra-luxurious, large room with its back to him. Kyutaro draws his sword and approaches. Just as he is about to strike, Tamanojo meows and looks up at him with wide, innocent eyes. In the end, Kyutaro shelters the cat. He hands over a jar pasted with a paper charm to drive away evil spirits to Sakichi and fools him into believing that it is trapped inside. On the other hand, a distraught Yozaemon summons the fearsome constable Ishiwatari Masamichi and his minion Hachigoro from the magistrate’s office, and asks him to search for the criminal … …

This blog contains information and musings on current and upcoming Japanese dramas but is not intended to be comprehensive.
View all posts by jadefrost →
This entry was posted in Fall 2013 Dramas and tagged Kitamura Kazuki, Nekozamurai Series. Bookmark the permalink.