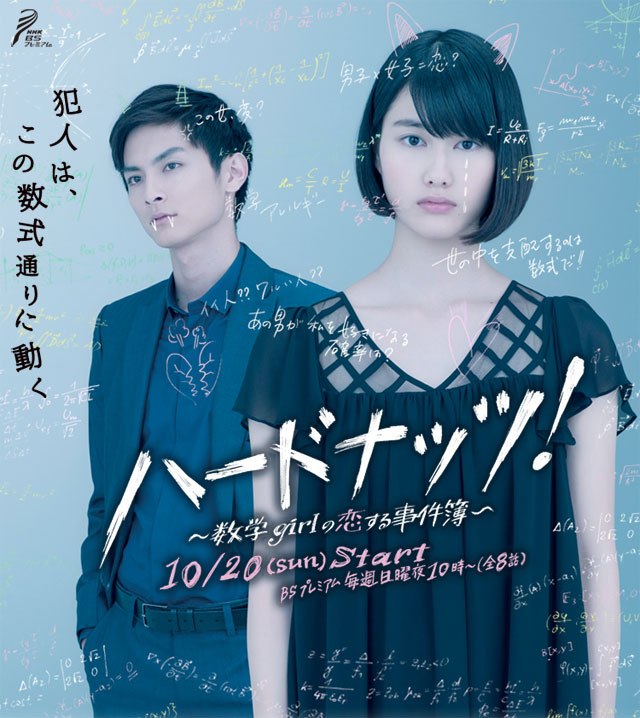 Story
Namba Kurumi is a student studying under Professor Morisaki who specialises in mathematics at Tokyo University. Her belief is that mathematical formulas govern everything in this world. She may be an oddball who is poor at communication, but solves difficult cases in flashes of genius. A young detective Tomoda Tatsuhiko of Hatsune Police Precinct brings a mysterious cipher to Professor Morisaki’s office. It is a message indicating the time and location of the latest in a series of explosions targeted at financial institutions. This appears to be from a book possessed by Yuzawa Michiaki, a mathematician currently serving a life sentence in Kanto Prison for three similar cases that took place 15 years ago. How did Yuzawa gain contact with the outside world? Kurumi shows great interest in the message and proposes that Tomoda lock her up in the same prison as Yuzawa for just one night so that she can decipher it. She discovers that the message is not in the books Yuzawa possesses but on a thread bookmark. According to the message, the next explosion will occur three days later. Yuzawa pretends to cooperate in the investigation and offers to lead the police to the location. However, he breaks away and escapes. Suspecting that Takita whose car was hijacked by Yuzawa, could be his accomplice, Kurumi and Tomoda set foot in the factory which Takita runs. But Takita has already been murdered. Furthermore, they learn that Takita’s son was killed by Yuzawa in the case 15 years … …

Characters
Hashimoto Ai as Namba Kurumi
A mathematics genius and a first-year Tokyo University student attending the Department of Mathematics. She may be quite an oddball who is poor at communication, but solves difficult cases in sparks of genius. She has another motive for learning mathematics. Her parents died when she was a child and she chose mathematics to seek revenge against the big corporation that caused their deaths.

Kora Kengo as Tomoda Tatsuhiko
A detective of Hatsune Police Precinct. He set a new record for uncovering firearms and was selected for the Criminal Affairs Division at a young age. He takes on the difficult cases together with Kurumi but their friendship is shrouded in darkness.

This blog contains information and musings on current and upcoming Japanese dramas but is not intended to be comprehensive.
View all posts by jadefrost →
This entry was posted in Fall 2013 Dramas, NHK and tagged Hard Nut, Hashimoto Ai, Kora Kengo. Bookmark the permalink.