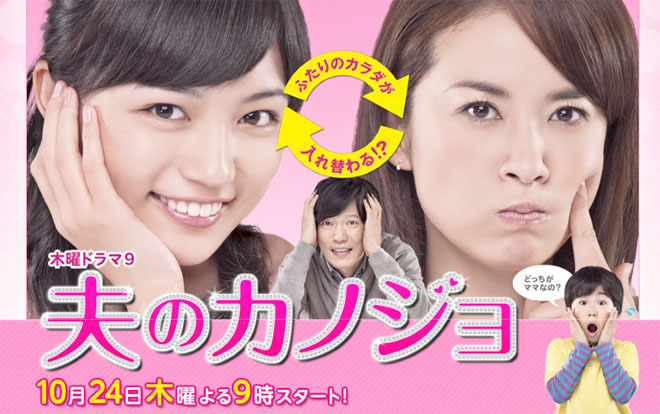 Story
A very bizarre incident happens to the Komatsubara family. Furthermore, it all arose because of the wife’s misunderstanding … … Yamagishi Hoshimi is a temporary employee at Daitoa Mill’s Sales Department. She is watched over by her boss Komatsubara Mugitaro, the head of the department, and fellow colleague Ishiguro Yasuhiro as she works “with wild abandon”. One day, when Mugitaro leaves the office after finishing work, a woman dressed in black stealthily starts to tail him. She is Mugitaro’s wife, Hishiko. Mugitaro and Hishiko have been married for 15 years and have two children. Hishiko had thought that she has a happy family, but she suspects Mugitaro of having an affair because of his recent behaviour. She follows him to some apartment where he rings the doorbell with a practiced hand. A young lady appears at the opened door. The mind of Hishiko is instantly filled with images of a family breakup. In fact, Mugitaro and Yasushi are only watching Hoshimi study for the exam to become a full-time employee. However, Hishiko does not know about this and calls Hoshimi out in order to protect her family. Under the impression that Hoshimi is the other woman, Hishiko negotiates in person for her to leave Mugitaro. But Hoshimi remains impassive no matter what she says and she cannot help but feel humiliated and defeated. In the midst of this, an old woman suddenly appears between Hishiko and Hoshimi. When the old woman cries out in a thundering voice, the two of them fall unconscious. Once Hishiko and Hoshimi wake up, they realise that they have unexpectedly swopped bodies! Mugitaro starts to feel suspicious about the changes in his wife. On the other hand, Hishiko is supported and charmed by Hoshimi who is inside her.

Characters
Kawaguchi Haruna as Yamagishi Hoshimi
A temporary employee at Daitoa Mill’s Sales Department. She lost her father at an early age and was brought up by her mother. She is having study sessions with her boss Komatsubara Mugitaro and colleague Ishiguro Yasushi for her exam to become a full-time employee, but ends up being suspected of having an affair with Mugitaro by his wife Hishiko. The type who will immediately speak her mind. While she and Hishiko are having words over the misunderstanding, an old woman suddenly appears and she ends up switching bodies with Hishiko. After discussing with Hishiko, she decides to live as her for a while.

Suzuki Sawa as Komatsubara Hishiko
Komatsubara Mugitaro’s wife. A full-time housewife. She lives with her husband, son Masato and daughter Mika. She has difficulty interacting with the committee members of the Parent-Teacher Association of the elementary school which Masato attends. She is a very big worrier and has a habit of wild imaginations. Convinced that Yanagishi Hoshimi is having an affair with her husband, she goes to meet her. While they are having words over the matter, an old woman suddenly appears and she ends up switching bodies with Hoshimi.

Tanabe Seiichi as Komatsubara Mugitaro
Komatsubara Hishiko’s husband. The head of Daitoa Mill’s Sales Department and the superior of Yanagishi Hoshimi and Ishiguro Yasushi. He is dedicated to his work and also admired by his subordinates. He has been going in and out of Hoshimi’s apartment to support her for the exam to become a full-time employee, but because he does not tell Hishiko about this, he is suspected of having an affair. He feels his wife’s gentleness in Hoshimi after the body swop and gets drawn to her.

Katahira Nagisa as Yanagishi Fumiko
Yanagishi Hoshimi’s mother. Her husband died young and she struggled on with work. She and Hoshimi are estranged because of some matter but … …

Furukawa Yuki as Ishiguro Yasushi
An employee of Daitoa Mill’s Sales Department. He respects Komatsubara Mugitaro both as a boss and father figure. Because he has returned to Japan after living abroad in his childhood, he is proficient in English and would immediately utter in English if there is something. He has feelings for Yanagishi Hoshimi and gradually grows suspicious of her relationship with Mugitaro.

This blog contains information and musings on current and upcoming Japanese dramas but is not intended to be comprehensive.
View all posts by jadefrost →
This entry was posted in Fall 2013 Dramas, TBS/MBS and tagged Kawaguchi Haruna, Otto no Kanojo, Suzuki Sawa, Tanabe Seiichi. Bookmark the permalink.