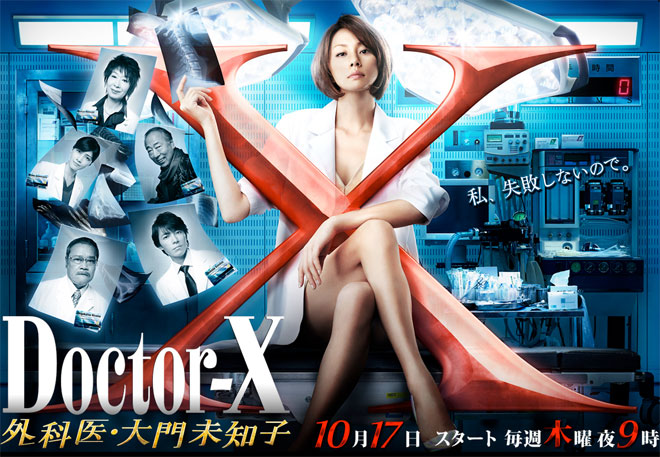 Story
At a racetrack in Asahikawa, Hokkaido, when freelance surgeon Daimon Michiko and Kanbara Akira who runs an agency for doctors, are enjoying the horse race from the general seats, an older woman wrapped in expensive fur is drinking champagne with a handsome younger man as they watch the race from the seats for horse owners. Their attention is on the decisive race. The path of the horse that Michiko bet on, is obstructed by the woman’s horse. Then, the woman’s horse falls and sustains a bone fracture. It ends up getting put down. The woman is lamenting how a horse worth 100 million yen can be euthanised so easily when she comes across Michiko. “Even if we operate, it will be 100% failure.” The words of the vet that fires up Michiko’s fighting spirit and she accepts the challenge of operating on a horse which she has not done before “because I never fail.” Several weeks later at a Teito Medical University conference, the course of treatment of a VIP patient of Mabuchi Kazuyo, the head of the Internal Medicine Management Department, who has cancer of the femur and wishes to be hospitalised anonymously is being discussed. The surgeons under Hiruma Shigekatsu, the head of the Surgery Management Department, determine that the best would be to partially amputate the femur. However, a voice disagrees. The speaker is Michiko, who is not even wearing a white coat. She causes a commotion at the conference. As angry shouts fly about, Michiko boldly advocates saving the lower extremities. At that moment, Mabuchi roars at all concerned. She is the one who called Michiko for the conference; the older woman who let Michiko operate on her horse in Hokkaido. Teito Medical University Hospital is viewed as the top of the mammoth organisation. However, in recent years the university hospital’s medical departments have been on the decline, and the hospital’s first priority is neither the lives of patients nor research papers but simply making profit. That may be why even doctors are constantly seeking to reap profit and freelance doctors like Michiko have appeared in the gruelling field of surgery which is under pressure from the harsh working conditions. In this era where the fittest survive, the organisation which is overwhelmed by the friction arising from being no different than a community of salarymen will be pitted against Michiko, the loner and maverick.

Characters
Yonekura Ryoko as Daimon Michiko
A freelance surgeon. Not affiliated to any university hospital’s medical department, she moves around to various hospitals while attached to the dodgy Doctors’ Agency. She observes working hours strictly, does not accept chores where a medical license is not needed, and is also uninterested in the power struggles characteristic of hospitals. Her fees are several orders of magnitude higher but she is a battle-hardened first-rate surgeon. She has absolute confidence in her own skills. Because she speaks her mind without hesitation or fear of anyone, she does not get on well with the staff of the medical department. Her interest and special skill is surgeries. She is entirely weak in everything else. There are rumours that she was a ship’s doctor and an army doctor besides being a hospital doctor. She has contacts in unexpected places.

Fujiki Naohito as Kondo Shinobu
A handsome, high calibre doctor of Teikoku Medical University Hospital’s Second Department of Surgery. However, just because he is a graduate of a regional national university, he is off the career track and uses every means to try to get promoted. The head of the internal medicine management department, Mabuchi Kazuyo, is his patron. He appears cool and indifferent to the power struggle in the hospital. Unlike the other medical staff, he acknowledges Daimon Michiko’s skills and shows interest in her but his true motive is a mystery.

Uchida Yuki as Jonouchi Hiromi
An anesthetist and a single mother. She had been working at Teito Medical University’s Third Hospital but turned freelance under the influence of Daimon Michiko as well as the break up of the hospital’s department of surgery. She now belongs to Kanbara Akira’s doctors agency. She is able to make precise and calm judgments.

Endo Kenichi as Ebina Takashi
A professor of Teikoku Medical University Hospital’s Second Department of Surgery. Although he is a sycophant, he is very proud and clashes with Daimon Michiko over almost everything. He is lying in wait for the position of the next head of department and his focus is primarily on lobbying within the hospital. He is a hanger-on of Hiruma Shigekatsu, the head of the surgery management department and persists in doing his will.

Kishibe Ittoku as Kanbara Akira
The director of Good Doctors Agency, which manages freelance doctors like Daimon Michiko. He is excellent as an agent and secures one big remuneration contract after another. A shady man rumoured to have once been a surgeon. He is also familiar with the state of affairs of a university hospital. His interest is mahjong.

Mita Yoshiko as Mabuchi Kazuyo
The head of Teito Medical University Hospital’s Internal Medicine Management Department. The only female at the top, she is rumoured to be the next hospital director. An incident leads her to scout Daimon Michiko and invite Michiko into the main hospital but her motive is a mystery. She had some relationship with Hiruma Shigekatsu in the past.

Nishida Toshiyuki as Hiruma Shigekatsu
The head of Teito Medical University Hospital’s Surgery Management Department. He has full command of an elite group of surgeons and has established the “Hiruma brand”. He is nicknamed the godfather of Teito Medical University Hospital. He has a genial exterior but is a heartless person who will resolutely cast away dissenters. Even though the election of professors is entirely under his control, his surgical skills are questionable.