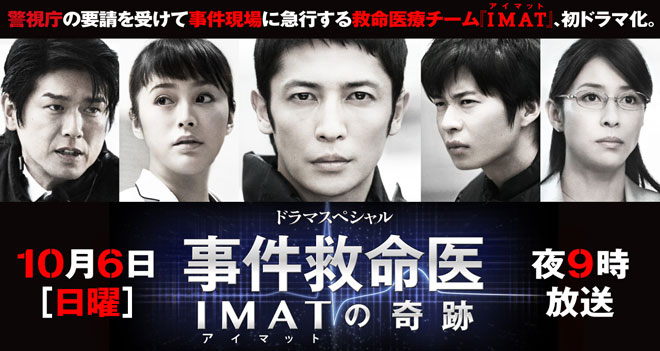 Date: From 9.00 p.m., 6 October 2013
Cast: Tamaki Hiroshi, Tanaka Kei, Kanjiya Shihori, Mizuno Miki, Takahashi Katsunori
Synopsis: On the grounds of the Tokyo Metropolitan Police Department, the IMAT (Crime Scene Medical Assistance Team) are conducting a joint training exercise on a bus hijack with the SIT (Special Investigation Team). IMAT member Hyuga Akira (Tamaki Hiroshi) is wearing a bulletproof vest and giving aid to the “injured” but is rather ineffective because of the unfamiliar surroundings. In contrast, SIT member Kageura Takuma (Tanaka Kei), who finished the exercise flawlessly from charging onto the scene to arresting the “criminals” with a realistic sense of tension, is irritated to be the slowed down by the presence of the IMAT and has a run in with his superior Arai Kenzo (Takahashi Katsunori). Arai pacifies Takuma, who has a tendency of getting combative, telling him that besides hostages, the IMAT also deals with police officers when they get injured. But Takuma is unhappy that criminals have even been included among the human lives at the scene. Then, one of the SIT members suddenly has a fit and faints. IMAT member Miyama Yukari (Kanjiya Shihori) and others diagnose a cerebrovascular disorder from the situation, but Akira is the only one who suspects that it is a disease of the aorta. He hurriedly and decisively draws out the blood accumulated in the pericardium; a treatment that is difficult even in the operating theatre. With an impressive nimbleness hardly recognisable during the training, he succeeds in saving a life. Several days later, a blast occurs at a park. The criminal, along with many of the injured, is brought by the IMAT to a hospital’s emergency centre. Takuma who has been dispatched to the scene, marches into the emergency centre. Showing signs of anger, he demands to question the seriously injured criminal. However, Akira asserts that his job is to prioritise human lives, and he turns Takuma away. The two of them clash head-on over their convictions … … After that, it emerges that the criminal has associates and there is a possibility that a big volume of explosives remains. The explosion at the park is no more than a prelude to a bigger stage … … The SIT members have a feeling that there will be a new incident. This anxiety quickly becomes a reality. Armed with guns, the group of associates have taken people hostage at a bank. Among the hostages is a pregnant woman who complains that she is feeling unwell. Finally, there is an injured person. The IMAT and SIT who have been dispatched to the scene have to confront right and wrong, life and death.
Official Website: www.tv-asahi.co.jp/imat

This blog contains information and musings on current and upcoming Japanese dramas but is not intended to be comprehensive.
View all posts by jadefrost →
This entry was posted in Summer 2013 Drama Specials, TV Asahi and tagged IMAT Series, Kanjiya Shihori, Takahashi Katsunori, Tamaki Hiroshi, Tanaka Kei. Bookmark the permalink.