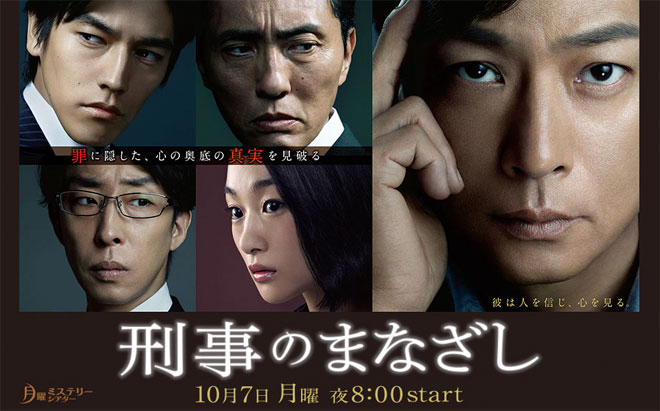 Story
10 years after his young daughter became a victim in a case and slipped into a coma from which she has never awakened, Natsume Nobuto, a former officer at a juvenile detention centre, has turned into a policeman. Now over 40, this latecomer has been a rookie detective with the Violent Crimes Section at Higashi Ikebukuro Police Precinct’s Criminal Affairs Division for four months. The section is in charge of deadly crimes such as murder and robbery. Higashi Ikebukuro Police Precinct’s jurisdiction of east Ikebukuro is an area where an entertainment and nightlife district has spread out behind high-rise buildings while a short walk away is an old town streetscape. This district of contradictory elements is like looking at a microcosm of society with its many facets. Natsume teams up with the veteran detective Fukumori Seiichi and younger female detective Adachi Ryoko to deal with cases as he finds out the truth. Despite the heartrending pain he has been through, he still tries to believe in people despite his job of treating people with suspicion. There have been three suspicious fires believed to be acts of arson within the jurisdiction. One night, a fourth fire occurs. An apartment is burnt down, claiming the life of a man. The dead man is Sato Hideaki. He is the common-law husband of nurse Maeda Keiko and had been living together with her and her son Yuma, but the two of them could marry because of Yuma’s opposition. However, Fukumori and Ryoko learn through their inquiries that Sato had been tormenting mother and son over money matters. They head to the hospital where Keiko works. At the same time, Natsume has been intently watching Yuma who keeps playing the claw game at a game centre. He joins Fukumori and Ryoko shortly afterward and verifies Keiko’s alibi on the night of the fire with a patient. Next, he visits Yuma to check on his alibi but … …

Characters
Shiina Kippei as Natsume Nobuto
The rookie detective of Higashi Ikebukuro Police Precinct’ Violent Crimes Section. Rank: Police Officer. An incident that happened to his beloved daughter 10 years ago led to his transformation from a juvenile detention centre officer to a police officer. He spent three months at other divisions before he was assigned to the Criminal Affairs Division four months ago. His daughter remains comatose because of the incident. Even so, he still tries to believe in people in investigations. His gaze is kind not only to victims but also to criminals. He faces cases with calm and pursues the truth with passion.

Kaname Jun as Kikuchi Taiga
The head of the Violent Crimes Section’s Team Kikuchi. Rank: Assistant Inspector. He acts like an intellectual, but actually has a mischievous side too. His creed is to “do what one wants to do in order to move up”, and he wants to go to the First Investigative Division someday. Half-worried and half-interested in Natsume Nobuo, he watches out for him. He is Natsume’s direct superior and therefore often lectures him.

Ono Yuriko as Adachi Ryoko
The only female in Higashi Ikebukuro Police Precinct’s Violent Crimes Section. Rank: Sergeant. She set out to be a police officer due to the credit given for helping others during her childhood. She worked her way up from the police box. She has been a detective for four years which is longer than Natsume Nobuo’s career as a detective. She is tactless and hates to lose, and because she does not mince her words even when interviewing witnesses and following leads, she ends up provoking trouble.

Matsushige Yutaka as Fukumori Seiichi
A dedicated veteran detective sincere in his dealings with the area, and a senior who is like a trainer to Natsume Nobuo. Rank: Sergeant. Because he is Higashi Ikebukuro Police Precinct’s “gatekeeper”, he calls on residents in the vicinity to prevent crime. He has no interest in the promotion exam and is a detective who devotes himself to patrolling the area as a field detective. He believes it is his mission to protect the neighbourhood.

Kitamura Yukiya as Nagamine Wataru
The ace of the Tokyo Metropolitan Police Department’s First Investigative Division. Rank: Assistant Inspector. A very proud man who thoroughly believes in treating people with suspicion, he is the type to act arbitrarily on his own authority and would at times resort to high-handed investigations. While he accepts Natsume Nobuo who is his contemporary, as a detective, he repeatedly clashes with him over things such as investigation policy and attitude towards cases.

Itaya Yuka as Tanabe Kumiko
Natsume Nobuo’s junior from university days. A counsellor on psychological matters. Although she is a school counsellor at a high school, she also frequently goes in and out of Higashi Ikebukuro Police Precinct as its counsellor. She knows Fukumori Seiichi, Kikuchi Taiga and the others by sight. Her trusted senior Natsume Nobuto has switched occupations to be a detective after the case 10 years ago. However, the change of heart in Natsume, who had been an outstanding officer at the juvenile detention centre, also frustrates her.

Yoshida Yo as Natsume Minayo
Natsume Nobuo’s wife. Their beloved daughter Emi has remained in a coma after a random attack on the street by a slasher 10 years ago. She believes that Emi will wake up and nurses her as much as possible as she supports her husband’s life as a detective.

This blog contains information and musings on current and upcoming Japanese dramas but is not intended to be comprehensive.
View all posts by jadefrost →
This entry was posted in Fall 2013 Dramas, TBS/MBS and tagged Itaya Yuka, Kaname Jun, Keiji no Manazashi, Kitamura Yukiya, Matsushige Yutaka, Shiina Kippei. Bookmark the permalink.