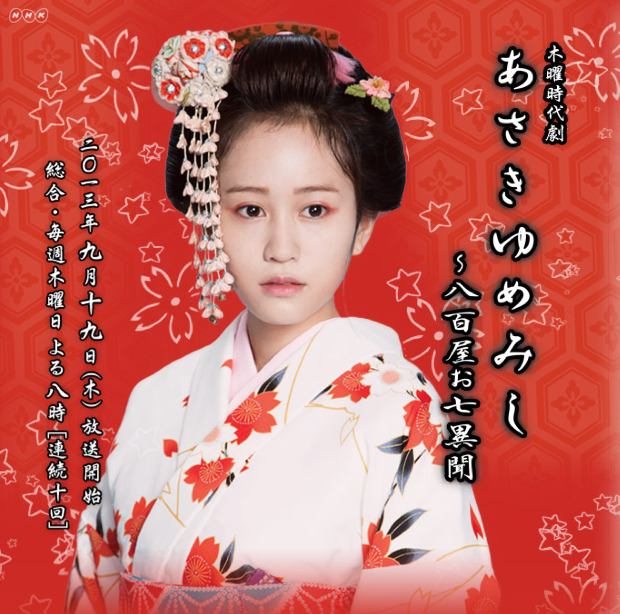 Story
In February 1681 (Enpo 9), right after the fifth shogun Tokugawa Tsunayoshi was installed, a fire that started in Edo’s Hongo-Maruyama spread to Komagome and even the grocer Yaogen is destroyed by fire. 14-year-old Oshichi, the only daughter of the wealthy owner of Yaogen, is placed with Daijoji Temple until the shop and residence are rebuilt. As Oshichi helps to take care of six children who lost their homes in the fire and are alone in the world while living at the temple, she meets the temple’s attendant Kichiza for the first time and is consumed with a heartrending one-sided love for him. However, Kichiza is curt. Then he learns about her feelings for him and realises that he also loves her. Believing that their love is impossible, he tells Oshichi that he will devote himself to learning. Yaogen is soon rebuilt and Oshichi returns to town. Her father Kihe, who sees the potential in his hardworking sales clerk Kanzo, intends to take him in as his son-in-law. However, Oshichi will not agree because Kichiza lives in her heart. Kihe and his wife try to keep Kichiza away by placing him far off, but he for some reason ends up returning to Daijoji and staying at a woodshed. Learning about this when she comes to see the children at the temple, Oshichi rushes to the mountain behind and is reunited with Kichiza at the woodshed. He confesses that he could not concentrate because all he was thinking about was her. The two of them desperately try to suppress their feelings for each other. However, Oshichi’s parents come to know of her taking shelter from the rain and hurry her marriage to Kanzo. The feelings of these two secret lovers will soon open a chapter of tragedy … …

Characters
Maeda Atsuko as Oshichi
The only daughter of the owner of the grocer, Yaogen. Because she has been sheltered by her wet nurse, she does not even know love when she arrived at Daijoji Temple at the age of 14. This would be the start of a drastic change in her fate. Then, when she turned 16 … …

Ikematsu Sosuke as Kichiza
An attendant at Daijoji Temple. He was left in the care of the temple when he was a child. He seems to the child of a samurai but his parentage is a secret. He had decided to dedicate his life to learning, but because of his encounter with Oshichi … …

Hiraoka Yuta as Kanzo
Yaogen’s sales clerk. He came to the grocer as the child of a tenant farmer. He grew up looking out for the young Oshichi. Although he is a conscientious worker, his destiny soon changes because of talk of marriage to Oshichi.

Nakamura Masatoshi as Kihe
The owner of Yaogen. A former accountant for the Maedas of Kaga domain, he was adopted into the family which owns Yaogen and expanded the grocer. He makes every attempt to protect his daughter Oshichi but … …

Takeshita Keiko as Ofusa
Oshichi’s mother. Because she is the only child, she took Kihe as her husband. She worries about the shop and family, and wishes for her daughter’s happiness but … …

Takahashi Kazuya as Aota Gennojo
A policeman who arrives at Yaogen in pursuit of the kidnapping of a young boy for ransom.

Tayama Ryosei as Priest Kakunen
The chief priest of Daijoji Temple and a relative of Oshichi’s mother. He is concerned about the welfare of Oshichi and Kichiza but … …

This blog contains information and musings on current and upcoming Japanese dramas but is not intended to be comprehensive.
View all posts by jadefrost →
This entry was posted in NHK, Summer 2013 Dramas and tagged Asaki Yumemishi, Ikematsu Sosuke, Jidaigeki, Maeda Atsuko, Tayama Ryosei. Bookmark the permalink.