Posted on September 5, 2013 by jadefrost 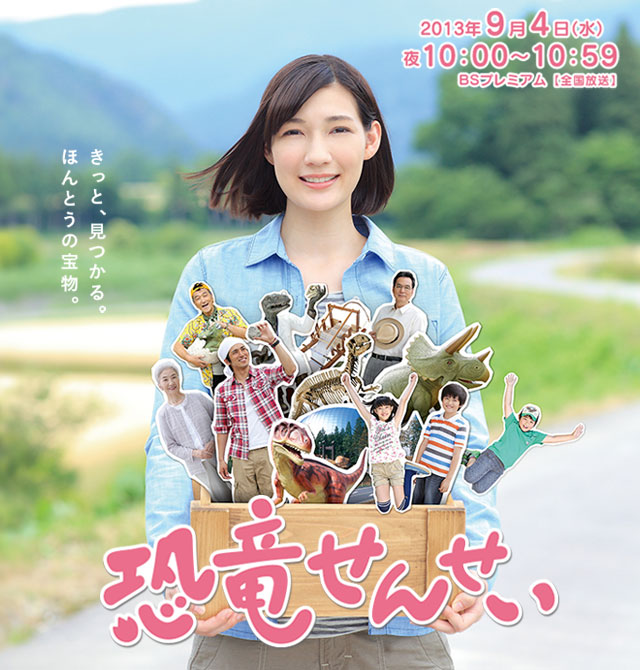 Date: From 10.00 p.m., 4 September 2013
Cast: Maiko, Takahashi Mitsuomi, Fujimura Shiho, Nagatsuka Kyozo, Hino Yojin, Aijima Kazuyuki, Kabe Amon, Nishihori Yumi, Watase Masato, Matsuyama Jun, Uchida Chikao, Enoki Chihiro, Takeuchi Kotone, Nakamura Koji
Synopsis: Shiozaki Noko (Maiko) works as a magazine editor in Tokyo. One day, she gets into a big row with her boss over the words of a reader who called her a liar, and ends up losing her job. Resolving to start life anew, Noko heads for an archaeological site in Fukui Prefecture’s Katsuyama City, which is Japan’s largest region for dinosaur fossils. This is where she meets her former classmate Tamamura Daichi (Takahashi Katsuomi), a reseacher who is the leader of the dig, and Akutsu Ryutaro (Nagatsuka Kyozo), the curator of the prefecture’s dinosaur museum and a leading expert in the study of dinosaurs. In fact, Noko lived in Katsuyama when she was an elementary student 17 years ago. Back then, she was immediately catapulted into the limelight after discovering the fossil of a new species of dinosaur. Noko is also extremely well-informed about fossils and dinosaurs. However, she is unable to join the dig and gets stuck with a job at a children’s playground called Jurassic Park. As Noko gets pushed around by the naughty children, what she digs up there is … …
Official Website: www.nhk.or.jp/fukui/kyouryusensei

This blog contains information and musings on current and upcoming Japanese dramas but is not intended to be comprehensive.
View all posts by jadefrost →
This entry was posted in NHK, Summer 2013 Drama Specials. Bookmark the permalink.