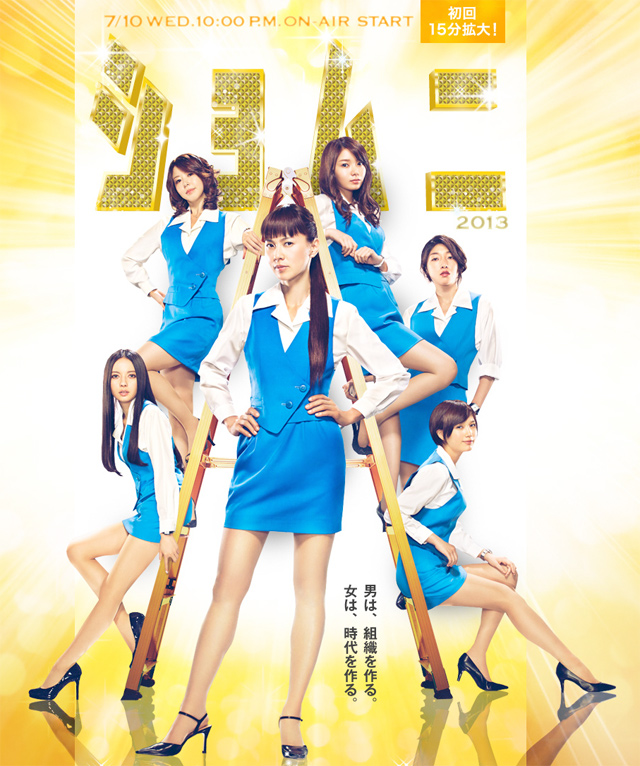 Story
10 years ago, the General Affairs Section 2 aka Shomuni was the department where employees branded by the company as useless trash were banished. However, there were those who enjoyed life in the dimly-lit room of the section. Tsuboi Chinatsu and five other females. They did as they desired which ended up helping the company as a result. Then Shomuni was done away and Chinatsu was not heard of … … 10 years later, Japan has been in the grip of a long recession and corporate restructuring. Naturally, it is the same at Manpan Shoji too … … Maruyama Shiori, a pole vaulter expected to be in the Olympics, joined the company as its poster girl but her performance was poor. Furthermore, the track and field club is also closed down in the wake of cost-cutting. Shiori, who is not even able handle phone calls well, is treated like a nuisance within the company and insulted on Twitter too. No one will come near Shiori even in the staff canteen. One night, a downcast Shiori encounters a female who is being pursued by someone. The next day, Shiori sees the same woman when she comes to the office. This woman is the legendary Tsuboi Chinatsu and she has suddenly returned to Manpan Shoji. Meanwhile, a new Shomuni is restored by the Human Resource Department and Shiori, Minami Madoka, Abe Reiko, Kojima Misuzu and Fukuda Masuyo are relocated.

Characters
Esumi Makiko as Tsuboi Chinatsu
A woman like no other. She is very aggressive and behaves like an old man. No one isShe has been wandering around the world and leading a carefree life after she resigned from Manpan Shoji 10 years ago. She made a large profit from a big American investment, was scouted by an Italian company, and when she was striking it rich making curry udon in India, she was headhunted and returned to Japan. There is a reason why she has shown up at Manpan Shoji.

Becky as Minami Madoka
A beauty with a sharp mind. She feels at home in the online world. She always carries a notebook around, and is a computer addict who gets anxious when she cannot tap on wi-fi.

Honda Tsubasa as Maruyama Shiori
A pole vaulter who joined Manpan Shoji in the role of company poster girl. She set her sights on the Olympics but suffers a setback because of an injury. The company’s track and field club is also closed down. She even loses her place in the office and winds up in Shomuni. She withdraws in depression, but meets Tsuboi Chinatsu, and the result of being pushed around by her is … … A person prone to making silly mistakes and who works too hard in everything.

Ando Sakura as Abe Reiko
An enigmatic female who always standing noiselessly behind people’s backs learning about the gossip in the company. Because she is good at feng shui and is always divining unlucky directions, she is a dreaded, spooky presence to the employees.

Mori Kanna as Kojima Misuzu
An exceptionally stylish, sensual female. She falls in love with men instantly. However, she is easily excited, but just as easily cooled down. Men are always around her.

Horiuchi Keiko as Fukuda Masuyo
A health enthusiast who is naturally well-informed about health equipment. She is a very talkative person who cannot help interrupting everyone. Her current craze is the long breath diet.

Miura Shohei as Samon Daisuke
An employee with Manpan Shoji’s Overseas Division. A young elite who works hard to boost the division which was the star performer at one time. He has taken the top spot for four years running in the company’s ranking of the man whom female employees want as a boyfriend. He feels a sense of rivalry with the Business Development Section which is led by Danjo Miki

Yasuda Ken as Hoshino Kenji
The head of the Human Affairs Division. He orchestrates various things with his subordinate Shimoochiai Koichi in order to crush Shomuni but … …

This blog contains information and musings on current and upcoming Japanese dramas but is not intended to be comprehensive.
View all posts by jadefrost →
This entry was posted in Fuji TV, Summer 2013 Drama Specials and tagged Esumi Makiko. Bookmark the permalink.