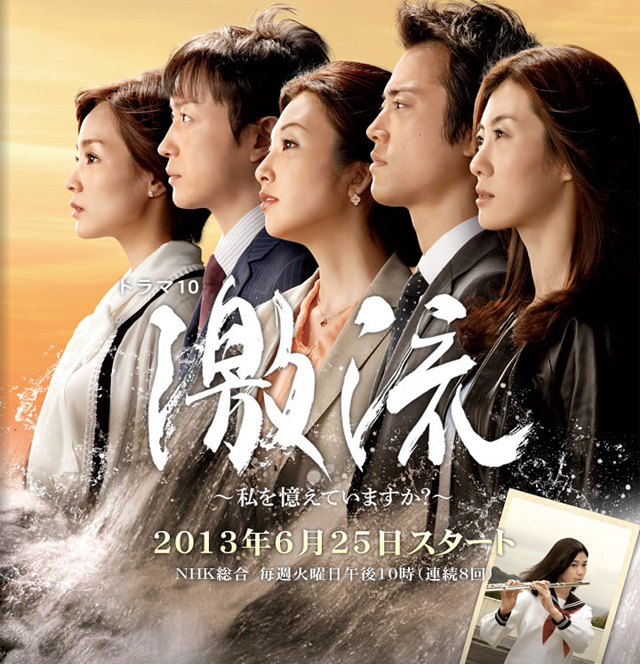 Story
Three former classmates Inoue Keiko, Akiyoshi Miya and Kawano Takako receive a mysterious email from a female classmate who went missing on a school excursion 20 years when they were in the third year of junior high school. “Do you remember me, Fuyuha?” it reads. Onodera Fuyuha was in the same group as the three of them for the excursion to Kyoto. She suddenly vanished during the trip and remains missing to this day. Keiko calls Sabashima Yutaka and Higashihagi Koji too and the five meet again for the first time in 20 years. At 35, they are at the turning point in life in both their work and private lives. Struggling with marriage, divorce, lay-off, child raising, loan repayment. Keiko is being held responsible for the loss of a big-name female writer’s manuscript and forced out of the literature department; Sabashima has been dropped from the fast track due to problems with a woman but cannot confide in his friends; Higashihagi approaches Miya because of a murder investigation but is slowly attracted to her; Takako makes a deal to be the mistress of an IT company president in order to put her daughter through a famous private elementary school after her husband is laid off … … When Keiko visits her alma mater one day, she encounters Sabashima. They are joined by Higashihagi and Miya who has received another email which says, “Why are you not searching for me? Fuyuha.” The four of them go to see Fuyuha’s mother and ask if she has any knowledge of the email, but she regards it as yet another prank and tells them to forget Fuyuha. Before long, misfortune starts to befall the reunited classmates one after another, and like a tumbling rock, they are swallowed by the strong current of life.

Characters
Tanaka Rena as Inoue (Misumi) Keiko
Nickname: Sankuma. An editor at a mid-sized publisher’s literature department. Her unfaithful husband whom she is in the process of divorcing is also in the same profession. She was a high-flyer in junior high school. She was good in her studies and loved to meddle in the affairs of others. Guys thought of her as an intrusive person. She was the vice-president of the student council and wore spectacles, but in fact secretly liked Sabashima Yutaka. In the spring of her third year in junior high school, she was grouped with Akiyoshi Miya, Kawano Takako, Sabashima, Nagato Yuki, Higashihagi Koji and Onodera Fuyuha for a school excursion to Kyoto and acted as the group leader. However, Fuyuha disappeared, and as the group leader, she felt a large responsibility.

Kiritani Kenta as Higashihagi Koji
Nickname: Hagiko. A detective with the Tokyo Metropolitan Police Department’s First Investigative Division. His code of conduct is social justice. While his relationships with his former classmates subsequently deepen, he is torn between friendship and justice when he finds Akiyoshi Miya’s name among the people connected to a murder case he is investigating. During junior high school days, he was a short, pimple-faced rail enthusiast. He was great friends with Sabashima Yutaka who shared the same interest and they were even rumoured to be a gay couple.

Kuninaka Ryoko as Kawano (Midohara) Takako
Her beautiful features have made her the object of admiration since junior high school days. She lives with her engineer husband and their 6-year-old daughter Hana in a newly built three-room apartment that is a 20-minute walk from the train station. Hana has taken the exams and got into a prestigious elementary school, but the expenses to hobnob with high society is larger than expected. At that moment, her husband is laid off, but she lies to fellow mothers that he is receiving offers from headhunters … … In order to put Hana through school, she gets involved in prostitution, and becomes the mistress of Obayashi Takayuki, an IT company president. However, he is a dangerous man who will suddenly get violent if she does not grant his requests.

Tomosaka Rie as Akiyoshi Miya
She has scored success as a singer and her talent as a novelist is also recognised. However, she was arrested for the illegal possession of cocaine and convicted on charges. As a result, she lost fame. During junior high school days, she believed she was the “select few” and had a burning desire to quickly get out of her small hometown in Chiba. She aims to make a comeback to show business.

Yamamoto Koji as Sabashima Yutaka
Nickname: Saba. Inoue Keiko’s first love. A graduate of Tokyo University and salaryman at a top bank. His father was also a graduate of a prestigious university and he was raised in a family of elites. They relocated and he grew up in the Tokyo metropolis since high school. He worked in the Planning and Development Department at the bank’s headquarters and was doing well. However, he got into trouble due to problems with a woman, and was demoted to the Setagaya branch office. He and his wife divorced, and she even gained custody of their son. After his divorce, he is stalked by the delusional woman who believes he will marry her.

Kariya Meiko as Onodera Fuyuha
During junior high school days, she would always play the flute alone on the rooftop in the evenings. Her favourite tune was George Bizet’s The Girl from Arles. She suddenly disappeared while on a school trip to Kyoto and her fate remains unknown.

Takeda Kenji as Asahimura Masataka
The teacher in charge of Inoue Keiko and the others. Soon after the summer break of their third year, he transferred probably because he felt responsible for Onodera Fuyuha’s disappearance.

Tanaka Misako as Onodera Yuko
Onodera Fuyuha’s mother. It has been 20 years since Fuyuha’s disappearance. She and her husband divorced after Fuyuha went missing, and she continues to wait for her return.

This blog contains information and musings on current and upcoming Japanese dramas but is not intended to be comprehensive.
View all posts by jadefrost →
This entry was posted in NHK, Summer 2013 Dramas and tagged Kiritani Kenta, Kuninaka Ryoko, Tanaka Rena, Tomosaka Rie, Yamamoto Koji. Bookmark the permalink.