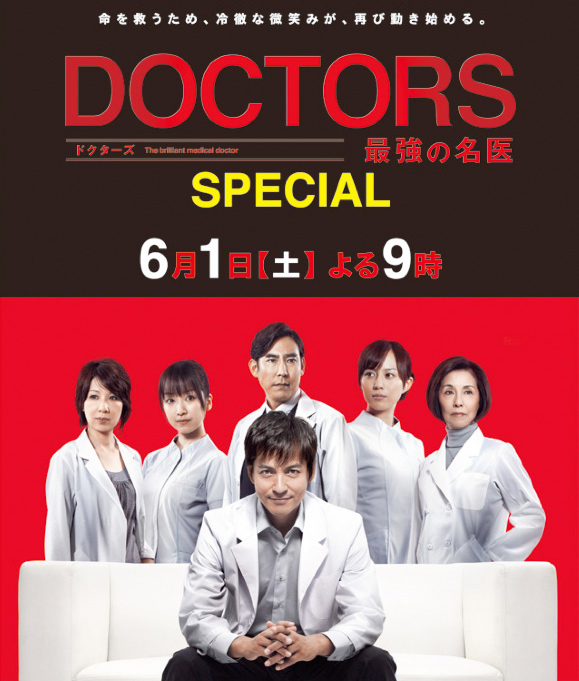 Date: From 9.00 p.m., 1 June 2013
Cast: Sawamura Ikki, Takashima Masanobu, Higa Manami, Kurokawa Tomoka, Takizawa Saori, Atsushi, Ito Ran, Ono Takehiko, Nogiwa Yoko, Okunuki Kaoru
Synopsis: It has been one and a half years since the successful living donor liver transplant by Sagara Kosuke (Sawamura Ikki) and Moriyama Suguru (Takashima Masanobu). Dogami General Hospital’s business has improved with the increase in patients. However, by performing that surgery, Moriyama offended Professor Sengoku Daigo (Shiba Toshio). Professor Sengoku belongs to Saito University Hospital and the pressure he exerts causes a significant drop in patient referrals from general practitioners nearby. The number of patients slowly decrease. Meanwhile, Moriyama who had been learning laparoscopic surgery at a Texan medical university, returns after three months. He tells Dogami General Hospital’s staff that their days of calm are over and they are privately disappointed. Several days later, a cancer patient Yukimura Eriko (Okunuki Kaoru) comes to Dogami General Hospital. Eriko had been told by Professor Sengoku at Saito University Hospital that there is no chance she will be fully cured and forcibly makes her leave the hospital but Sagara proposes medical therapy in conjunction with surgical treatment. He even sets the goal of excising the cancer in an operation that will incorporate Moriyama’s laparoscopic surgery. Moriyama is elated that he can demonstrate his skills. But when he learns that Eriko was Professor Sengoku’s patient, he suddenly starts to balk. Professor Sengoku is the front-runner to be the next head of Saito University Hospital’s medical department. If Moriyama infuriates the professor any further, it would spell the end of his own career. As a doctor, Sagara is angry at Professor Sengoku for deeply hurting Eriko. Furthermore, he wants to transform Dogami General Hospital into the ideal hospital, and plots to make the cowardly Moriyama do the surgery … …
Website: www.tv-asahi.co.jp/doctors
Related: Doctors ~ Saikyou no Meii

This blog contains information and musings on current and upcoming Japanese dramas but is not intended to be comprehensive.
View all posts by jadefrost →
This entry was posted in Spring 2013 Dramas, TV Asahi and tagged Doctors ~ Saikyou no Meii Series, Kohinata Fumiyo, Ono Takehiko, Sawamura Ikki, Takashima Masanobu. Bookmark the permalink.