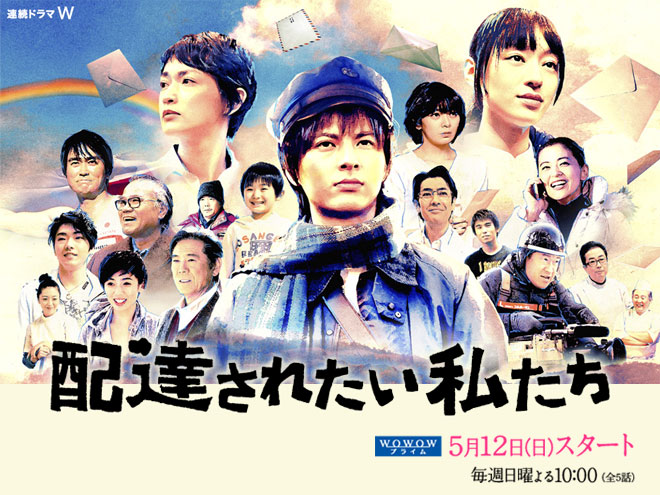 Story
32-year-old Sawano Hajime is blessed with a wife Masami and 6-year-old son Teru but he suffers from depression. He loses his job, has no dreams or desire to live. His relationship with Masami also starts to get strained and he cannot build a bond with Teru. One day, with the intention of committing suicide, he visits an abandoned building that was a former movie theatre. He picks up seven letters that were dumped there seven years ago. Deciding to deliver those letters to countdown his life, he first passes a letter to Okae Yu who runs a hair salon. It is from the man her mother, who had abandoned a young Yu and her father, eloped with. Through the letter, Yu learns the depth of her mother’s love and the secret of the diamond earrings she had previously received. Concerned about Sawano, Yu follows him around and meets Masami and Teru. On the other hand, Sawano continues his deliveries … … Through meetings and partings with the people at the delivery addresses, he encounters various human dramas … …

Characters
Tsukamoto Takashi as Sawano Hajime
He almost never goes out of the house because of depression and is unemployed. In the past, his ambition was to be a journalist and he was full of determination. After he ran overseas, he became a travel agency tour guide.

Hasegawa Kyoko as Sawano Masami
Sawano Hajime’s wife. She has felt emotionally trapped ever since her husband became depressed, and is also harsh on their son Teru. She feels that she is the cause of Hajime’s depression.

Kuriyama Chiaki as Okae Yu
A hairdresser. Her father has just passed away and she is strongly affected by her mother Misono who suddenly left home 15 years ago when she was a child. She now has a hairdressing salon at home. She cannot understand the actions of Sawano Hajime, and follows him around.

Emoto Tasuku as Gunkan
A fellow sufferer of depression who has the same psychiatrist as Suwano Hajime. They become acquainted at the hospital. He displays symptoms when he goes to office, but is in extremely good spirits if he does not go.

Nishioka Tokuma as Sawano Hajime’s father
A former teacher. He is a strict man. His son is his pride although he does not tell him that.

This blog contains information and musings on current and upcoming Japanese dramas but is not intended to be comprehensive.
View all posts by jadefrost →
This entry was posted in Spring 2013 Dramas, WOWOW and tagged Emoto Tasuku, Haitatsusaretai Watashitachi, Hasegawa Kyoko, Kuriyama Chiaki, Tsukamoto Takashi. Bookmark the permalink.