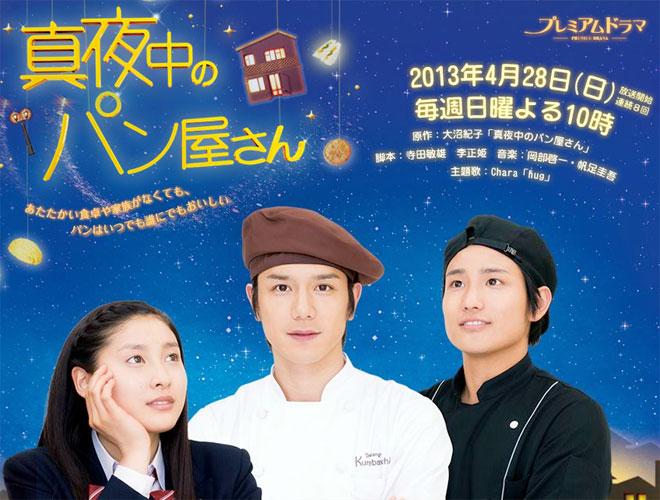 Story
Boulangerie Kurebayashi, a bakery at Sangenjaya is open from 11 p.m. to 5 a.m. It is a small, queer shop that is run by owner Kurebayashi Yosuke and baker Yanagi Hiroki. Six months ago, Yosuke suddenly went from high-flying salaryman to owner and apprentice of this newly started bakery. He seems unskilled but looks happy learning to make bread. It is not just that. He looks happy being a baker. One night a female high school student called Nozomi suddenly turns up at Boulangerie Kurebayashi. Then she makes a declaration that sounds like a lie. “I’m the younger sister of Kurebayashi Miwako. I would like your hospitality from today.” However, Kurebayashi’s wife Miwako died six months earlier. Nozomi is shocked. However, Kurebayashi lets her stay in the shop without question. This is the start of the numerous incidents that the three of them will find themselves embroiled in … …

Characters
Takizawa Hideaki as Kurebayashi Yosuke
The owner of Boulangerie Kurebayashi, a mysterious bakery located in some nook in Tokyo that only opens in the middle of the night. He went from elite salary man to owner of Boulangerie Kurebayashi six months ago, to carry out the wishes of his late wife Miwako. As he learns to make bread under the guidance of Yanagi Hiroki, he dutifully abides by the opening hours of “11 p.m. to 5.00 a.m”. He does not impose on people and is kindhearted.

Kiriyama Akito as Yanagi Hiroki
A youth who works at Boulangerie Kurebayashi as its bread maker because of his ties to Kurebayashi Yosuke’s late wife. Although he says a lot of offensive things and always ready for a fight, he is kind at heart. A skilled bread maker who trained in France.

Tsuchiya Tao as Shinozaki Nozomi
A high school student who suddenly steps into Boulangerie Kurebayashi claiming to be the younger step-sister of Kurebayashi Yosuke’s late wife. It seems to be some secret, but Kurebayashi warmly welcomes Nozomi and lets her live with him on the second floor. She is a lonely young girl who has been placed in many places since she was a child. However, she gradually becomes a indispensable to this bakery.

Ito Ayumi as Kurebayashi Miwako
Kurebayashi Yosuke’s wife. She passed away in an accident six months ago. She led a separate life from Kurebayashi who worked overseas and was preparing to open a “midnight bakery” on her own. She decided that the bakery, Boulangerie Kurebayashi, would be open from 11 p.m. to 5.00 a.m. Yanagi Hiroki is an old acquaintance of hers.

Tomosaka Rie as Shinozaki Ritsuko
Shinozaki Nozomi’s mother. She appears to have had some relationship with Kurebayashi Yosuke’s late wife Miwako, and leaves Nozomi at the bakery. She behaves as if she is an uninhibited woman but seems to have some secret.

This blog contains information and musings on current and upcoming Japanese dramas but is not intended to be comprehensive.
View all posts by jadefrost →
This entry was posted in NHK, Spring 2013 Dramas and tagged Ito Ayumi, Mayonaka no Panya-san, Takizawa Hideaki, Tomosaka Rie, Tsuchiya Tao. Bookmark the permalink.