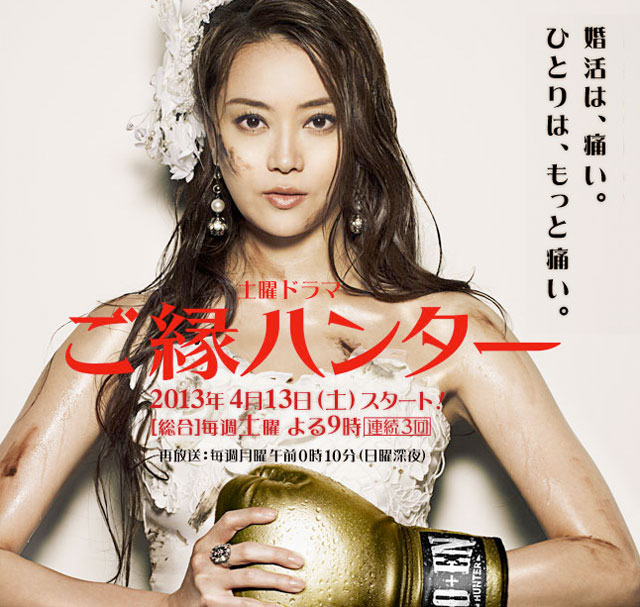 Story
37-year-old Hasumi Rika is the customer centre supervisor at a medium-sized mail order company. Her father has passed away and because her younger sister married first, she lives in the family home with her mother. She has always thought to herself that it is her part to look after her mother Tomoko in her old age. One day, Rika is invited by her yoga instructor Kiyota Etsuko to attend a marriage hunting party and finds herself paired with Sakamoto Eikichi, a man who does not even maintain his nostril hair. Meanwhile, Tomoko suddenly declares that she is remarrying. Worried about her mother, Rika accesses the marriage hunting website she has used. She is initially doubtful but arranges to meet a man who sent her an email. She gradually gets into the “marriage hunting market” and becomes involved in it. At first, she makes light of it, thinking that a person like herself will be able to find a good partner immediately. But she sees with her own eyes the marriage hunting situation of a female around 40 and is made to realise her own value on the “market”. However, her competitive spirit and the encouragement of fellow marriage hunters makes her continue marriage hunting. As Rika does so, she learns what kind of person she is, what she truly wants and what really matters in life. Just as she is starting to look once again at the marriage and future that she wishes for … …

Characters
Mizuki Arisa as Hasumi Rika
A permanent employee of a medium-sized mail order company. The supervisor in charge of the customer centre, she is called the “customer centre fortress” within the company. She is around 40 and has the disposition of a big sister. Her father has passed away and because her younger sister married first, she lives in the family home with her mother Tomoko. She has always thought to herself that it is her part to look after her mother in her old age. One day, her mother’s sudden declaration of remarriage drastically changes the situation. She falls in love with a high school teacher at first sight at a masquerade party and they date. However, she is shocked to learn that he is also seeing other women who are marriage hunting.

MATSU as Sakamoto Eikichi
A researcher who works at a food company’s research institute. He becomes acquainted with Hasumi Rika through a marriage hunting party and after that they become buddies even though things are awkward between them. In order to overcome his hopelessness with women, he is encouraged by the marriage hunting master Musubu to practice hard. He has a strong desire to marry and good-naturedly tries to this out. However, this is because he wants to give his parents a grandchild. One day, he receives his first invitation from a woman. The sender is Inoue Chiho, who is searching for a marriage partner in order to break free of her erratic life.

Otsuka Nene as Kiyota Etsuko
A yoga instructor whose classes Hasumi Rika attends. She exulted in her youth during the bubble era and even after that she has continued to live doing what she loves. Her attitude towards marrige is “if there is a good guy …”. She takes part in marriage hunting online but because she has to put down her actual age 45, she sees it as a disadvantage and now concentrates on parties. One day, she ends up paired with a man at a masquerade party she attends with Rika, and her destiny changes because of this.

Asaji Yoko as Hasumi Tomoko
Hasumi Rika’s mother. She runs a Japanese calligraphy school out of her home. Her husband passed away more than 10 years ago. She suddenly declares that she is marrying a man called Murakami whom she met on a marriage hunting website. Furthermore, she says that the two of them will settle down in a new home. This shocks Rika. However, this desire to live together ends up influencing Rika’s view on marriage … …

Terawaki Yasufumi as Musubu
A counsellor and lecturer who hosts a marriage hunting website. He calls himself the “marriage hunting master”. He has a distinctive style. “Marriage is impossible because there are no good men and women. If you genuinely wish to marry, change yourselves. This is the first step to take!” However, in one-to-one counselling, he offers advice that takes his clients’ feelings into consideration. His private life is shrouded in mystery.

This blog contains information and musings on current and upcoming Japanese dramas but is not intended to be comprehensive.
View all posts by jadefrost →
This entry was posted in NHK, Spring 2013 Dramas and tagged Goen Hunter, Mizuki Arisa, Otsuka Nene, Terawaki Yasufumi. Bookmark the permalink.