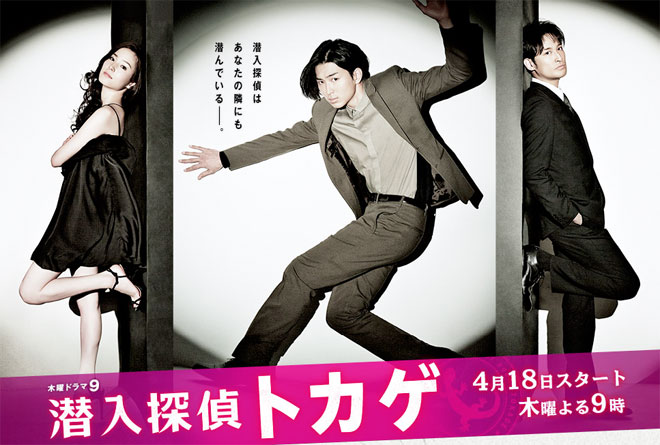 Story
Oribe Toru, nicknamed Tokage, is a former detective of the Tokyo Metropolitan Police Department’s First Investigative Division. He is a little eccentric, uncooperative and does not trust others. Although shunned by the people around him, he is respected for the number of difficult cases he has cracked with his extraordinary photographic memory and phenomenal physical ability. Two years ago he made a fatal error in a case and his only partner lost his life. Although he miraculously survived, he took responsibility and resigned from his post as detective. He is now working as an investigator at Yanagi Detective Agency in Kichijoji. One day, Tokage receives a undercover investigation request from Kishimori Mikio, the head of criminal investigations at the Tokyo Metropolitan Police Department. In order to put a brake on the First Investigative Division’s declining rate of arrests, a decision has been reached to introduce a private investigator who will be used as an undercover sleuth in investigations. This is an unprecedented experiment and Tokage has been ordered to be its first sleuth. Yanagida Masahiko, the head of the detective agency, assigns Mochizuki Kaori, a rookie, to be Tokage’s partner. However, Tokage displays no interest and tries to carry out his missions on his own. On the other hand, Terajima Shuji of the First Investigative Division who has obtained an anonymous tip-off about the trafficking in children’s organs, and tries to investigate these transactions. But he is told by Kishimori that an investigator has been dispatched to the location and his expression grows taut. Meanwhile, Tokage masquerades as the secretary of the Minister of Health, Labour and Welfare, in order to infiltrate the venue. He boards a large ferry from Hokkaido where the deal is scheduled to take place but … …

Characters
Matsuda Shota as Tokage (Oribe Toru)
An investigator with Yanagi Detective Agency. He has extraordinary photographic memory that enables him to recall various incidents in an instant, and also phenomenal physical ability. He is uptight, methodical, bluntly sarcastic and uncooperative. His pet phrases are “I’m not interested” and “Emotions have no worth.” He used to be a detective of the Tokyo Metropolitan Police Department’s First Investigative Division but resigned two years ago as a result of a case. However, he is hired as “undercover sleuth no. 1” on the secret orders of Kishimori Mikio, the head of criminal investigations. This is an unprecedented move by Kishimori who is frustrated with the present investigation system which has led to a fall in the rate of arrests. So he returns to the scene as a civilian detective in cooperation with the First Investigative Division. There are many mysteries surrounding his childhood and private life, and these are slowly revealed.

Matsuoka Masahiro as Terajima Shuji
A detective of the Tokyo Metropolitan Police Department’s First Investigative Division. Rank: Assistant Inspector. He partners with Makihara Yoko for investigations. Although he is not a career detective, his rate of arrest of criminals is number one in the division aside from Tokage. Uninterested in status and fame, he is content to do investigations and continually rejects the invitation to take the promotion exam. He remains an assistant inspect but is a popular person with many admirers even in his own division. Tokage’s rival who is the complete opposite of Tokage. A kind-hearted person whose handsome features and passion are his weapons to draw out important witness statements in investigations. He hates Tokage due to the loss of a trusted superior in a case two years ago.

Renbutsu Misako as Mochizuki Kaori
A new investigator at Yanagi Detective Agency. A well-off, self-assured girl with something careless about her. She is not easily discouraged and is the sort who will get close to people. After graduating from university, she worked at a bank for two years but turned into a sleuth because she is searching for someone and becomes Tokage’s assistant. Because she is a newbie who still does not know the fundamentals of investigations, Yanagida Masahiko instructs her to train under Tokage. Tokage’s uncooperativeness and pigheadedness depresses and angers her, but she believes that he will be able to change. She has a keen sense of smell and is able to sniff out scents that an ordinary person cannot. Her toughness means that she often rescues Tokage. With Kaori’s help, Tokage identifies criminals with his astounding memory.

Mimura as Makihara Yoko
A detective of the Tokyo Metropolitan Police Department’s First Investigative Division. Rank: Sergeant. Although she is quite beautiful and exceptionally stylish, a part of her behaviour is like an old man. She is disgruntled about joining Tokage’s investigations and expresses her opposition. Like Terajima Shuji, she persists in catching criminals ahead of Tokage each time. She is strong at electronic devices, and makes use of a variety of data in investigations. The death of her boyfriend left her deeply depressed and she withdrew from the world. It was Terajima who put her back on the scene. Her love for him borders on respect. She focuses on matchmaking parties on her days off.

Mitsuishi Ken as Oribe Michio
Tokage’s late father. He had been a police officer and gave a young Tokage all sorts of training so that he would have a good foundation.

Endo Kenichi as Kishimori Mikio
The head of criminal investigations at the Tokyo Metropolitan Police Department, and Tokage’s former superior. His childhood upbringing by his father, a Finance Ministry bureaucrat, was strict. After he graduated from Tokyo University, he passed the Type I national civil service examination and joined the Tokyo Metropolitan Police Department as a career official and came into his present position three years ago. His wife is the daughter of the police commissioner while his father’s brother is a big wig in right-wing politics. An ambitious man whose biggest priority is to become superintendent general and then the next police commissioner. He was just a step short of being superintendent general when Tokage gave up his career as a detective, and the First Investigative Division’s rate of arrests has been on the decline. Because of that, he creates a special exception, the “undercover sleuth”, and he schemes to try to raise the rate of arrests by getting Tokage back on the investigation scene while still a civilian. On the other hand, he has another motive for using Tokage … …

Ito Shiro as Yanagida Masahiko
The head of Yanagi Detective Agency in Kichijoji, Tokyo. The boss of Tokage and Mochizuki Kaori. He had once been a detective but resigned 15 years ago and started a detective agency in Kichijoji. He still has the intelligence network which he built up during his time as a detective. His fees are cheaper than other agencies and he accepts many investigations. He values Tokage’s investigative ability and prizes him as an investigator, but decides to let him return to the scene at Kishimori Mikio’s request. His special skills are wiretapping and safebreaking. He also gives Tokage advice when he comes to a dead end in investigations.