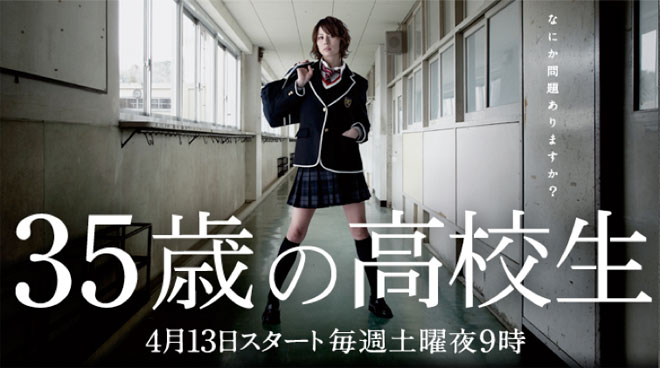 Story
On the first day of the new school term at Kunikida High School, a flamboyantly dressed new student arrives in a luxury foreign car. Her name is Baba Ayako and she is 35. Ayako, who wants to redo high school at 35 because she dropped out, has been accepted by Kunikida High School through a request from the Board of Education. Other than her name and age, Ayako’s background is a complete mystery. Both the teachers and students regard her with curiosity. Ayako is admitted to Class 3A which the newly assigned Japanese language teacher Koizumi Junichi is in charge of. Koizumi does not know how to treat Ayako who is older than him and unwittingly uses honorific speech. The students of Class 3A mock Ayako by calling her “Babaa”, but Ayako declares that she looks forward to making 100 friends. During lunch break, Ayako sees her classmate Hasegawa Rina eating a lunch box in one of the toilet cubicles. In fact, Rina, who has no friends, has been having her meals in the toilet so that she will not be see alone. Ayako who does not understand why Rina is eating in the toilet, asks her, “Is it delicious to eat alone in the toilet?” Because of that, Rina’s lunch habit is made known to the class and she stops coming to school from the next day onwards. Learning that Rina may be unwilling to come to school, Ayako heads to her house … …

Characters
Yonekura Ryoko as Baba Ayako
An over-age 35-year-old high school student who re-enrolls after 18 years. She causes problems at Kunikida High School for she commutes in a luxury foreign car, at lunch break she takes a puff in the smoking room for teaching staff and after school she drains a can of beer. She scoffs at the absurdity of the “darkness” of present day high school students and recklessly tackles the darkness in the hearts of her classmates.

Mizobata Junpei as Koizumi Junichi
The form teacher of Kunikida High School’s Class 3A and Japanese language teacher. Learning that being popular with the students of this school is vital to being a teacher, he attempts to win them over through double dealing. Although he is shallow, he is impossible to hate.

Katase Nana as Nagamine Akari
Kunikida High School’s school counsellor who is free because no student comes to consult her. Knowledge alone reduces her into a person who is as useful as a lavish lamp in broad daylight. An anomaly in the staff room. She is a refuge for Koizumi Junichi in times of need.

Enoki Takaaki as Noda Yoshio
The principal of Kunikida High School. He believe responsbility is an imposition. A timid person whose philosophy is to play it safe. He wishes to have a peaceful and uneventful school life and threatens to kick Baba Ayako out of school if she causes trouble. He is sensitive about the drop in his own standing.

Masu Takeshi as Nanigawa Makio
Kunikida High School’s guidance counsellor. He sees through Koizumi Junichi’s inner thoughts and makes him feel dread. He is self-seeking, gets hysterical easily, and detests being troubled. Even so, he also hates giving other people credit.

Watari Tetsuya as Asada Yukinobu
The head of the Board of Education. Because he rapidly gives the chop to incompetent school principals, he is called Kaiser and is feared.

This blog contains information and musings on current and upcoming Japanese dramas but is not intended to be comprehensive.
View all posts by jadefrost →
This entry was posted in NTV, Spring 2013 Dramas and tagged 35-sai no Koukousei, Mizobata Junpei, Watari Tetsuya. Bookmark the permalink.

1 Response to 35-sai no Koukousei