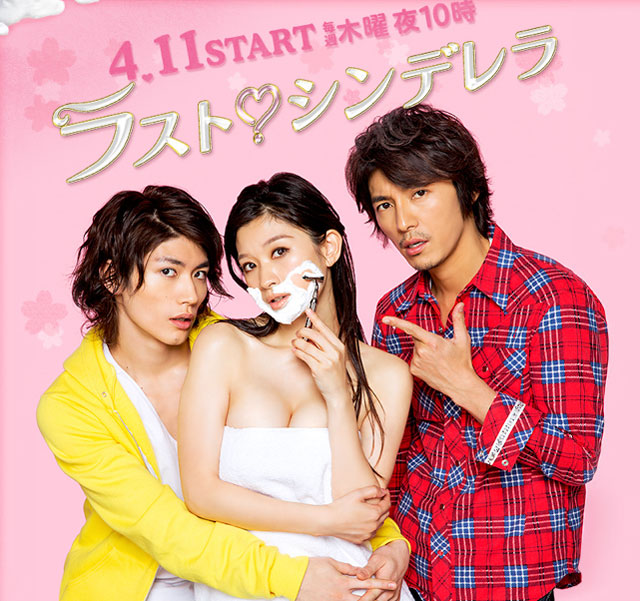 Story
39-year-old and single, Toyama Sakura is the assistant manager of the Kichijoji salon, Happy-Go-Lucky. One morning, she discovers one strand of beard growing on her chin when she looks at the mirror and gets a shock. Realising that she is turning masculine, she sets her mind on becoming a woman in love. On the same day, Tachibana Rintaro, who entered the company at the same time as Sakura and is the manager of the main Ginza salon, becomes the new manager of the Kichijoji salon. This chafes at Sakura, who has been the assistant manager for eight years and does not get along well with Rintaro. She goes straight to the company president Hagiwara Toshio. However, she is told to quit if she is unhappy. One day, Sakura goes to a health spa with her two good friends housewife Takeuchi Miki and sports gym instructor Hasegawa Shima. When the three of them go into the beauty treatment room, the attendant notices the band-aid on Sakura’s chin. Sakura explains that she had nicked herself while pulling out beard so the attendant explains that excessive work and stress has activated the androgen in Sakura’s body, making her masculine. This strikes fear in Sakura. On another day, Rintaro’s customer Ogami Chiyoko comes to Happy-Go-Lucky. Chiyoko is also acquainted with Sakura. Sakura ends up participating in a matchmaking party through an introduction from Chiyoko and invites Miki and Shima too. However, everyone ignores her so she drowns herself in alcohol and gets drunk. When Sakura steps out to the lobby, she encounters the young professional BMX rider Saeki Hiroto who has been instructed by Chiyoko to target her … …

Characters
Shinohara Ryoko as Toyama Sakura
A stylist and the assistant manager of Happy-Go-Lucky’s Kichijoji salon. One morning, she wakes up to discover that beard has grown. She is strong minded and is the sort who cannot leave people in need alone. Hers is a job that beautifies people, but she is indifferent to fashion and has no sexual charms. Although she is a soft-hearted person, she is the sort who would call a spade a spade. She has not had a boyfriend or sex in 10 years. It is not that she does not desire marriage, but she has forgotten how to love and is scared of falling in love.

Miura Haruma as Saeki Hiroto
A BMX rider who started in junior high school and became a professional when he was 20. But after that, his resuls in competitions have not been lacklustre outstanding, and his income is also not stable. As a result, he continues to lead the life of a man financially dependent on a woman. During this time, he meets Toyama Sakura at a matchmaking party and gradually gets attracted to her … …

Fujiki Naohito as Tachibana Rintaro
The new manager of Happy-Go-Lucky’s Kichijoji salon as well as Toyama Sakura’s unwitting new neighbour. He seems to be a cool, handsome man on the surface, but inside, he loves dirty jokes and has a barbed tongue. His great loves are alcohol and scissors. A natural enemy who will always end up arguing with Sakura when they meet. He does not see her as the opposite sex. Something appears to have happened in his past … …

Otsuka Nene as Takenouchi Miki
Toyama Sakura’s good friend and a full time housewife. Her immediate concerns are her mother-in-law and a lack of sex. She loves her husband Kohei whom she met in university, but is not able to go on tolerating a life without sex. She also has two children, a 12-year-old daughter and 8-year-old son who are going through a rebellious stage.

Iijima Naoko as Hasegawa Shima
Toyama Sakura’s good friend and an instructor at a gym in Kichijoji. She looks sensual and is constantly oozing pheromones. At times, she impulsively desires sex. Because she is a divorcee, she alternates between whatever man she can lay her hands on.

Nanao as Ogami Chiyoko
A regular customer of Happy-Go-Lucky salon. The daughter of a landlord and a domestic help. Because of some inferiority complex, she has no self-confidence and is also a coward when it comes to love. She has had a one-sided love for Tachibana Rintaro for a long time but does not have the courage to confess her feelings to him, and arbitrarily regards Toyama Sakura as her rival.

This blog contains information and musings on current and upcoming Japanese dramas but is not intended to be comprehensive.
View all posts by jadefrost →
This entry was posted in Fuji TV, Spring 2013 Dramas and tagged Fujiki Naohito, Last Cinderella, Miura Haruma, Otsuka Nene, Shinohara Ryoko. Bookmark the permalink.