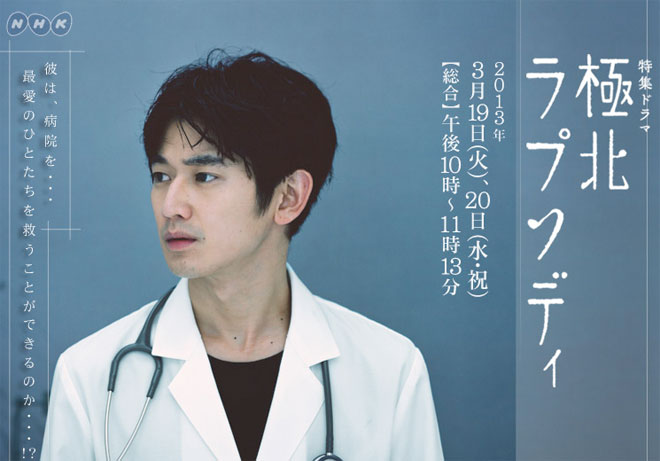 Story
In an extreme northern coastal city in Hokkaido, Imanaka Yoshio has become the only doctor at the financially troubled Kyokuhoku City Hospital. Sera Masashi arrives at the hospital as its new director. In order to reduce losses, Sera announces plans to close the inpatient ward and refuse to accept emergency patients. On the other hand, Imanaka is stuck with the role of persuading the grandfather of his girlfriend Namiki Kozue to get out of hospital and return home. He is shocked to learn that Kozue is Sera’s daughter. In the midst of this, it is reported that a patient called Tadokoro Hosaku might have died after coming to the hospital due to Sera’s refusal to examine and diagnose him. A commotion ensues.

Characters
Eita as Imanaka Yoshio
A Tokyo-born surgeon at Kyokuhoku City Hospital in Hokkaido. As the only doctor left at the hospital, he looks into every department.

Kato Ai as Namiki Kozue
A hairdresser who works at Kanna Hair Salon which is near Kyokuhoku City Hospital. Imanaka Yoshio’s girlfriend. A native of Kyokuhoku City.

Kobayashi Kaoru as Sera Masashi
He comes on board as the director of Kyokuhoku City Hospital in order to turn it around. He is Sera Kozue’s father but has not been in contact with her after the divorce.

Yamaguchi Yuichiro as Hayami Koichi
The assistant director of Yukimi Emergency Medical Care Centre in Yukimi City which is adjacent to Kyokuhoku City.

This blog contains information and musings on current and upcoming Japanese dramas but is not intended to be comprehensive.
View all posts by jadefrost →
This entry was posted in NHK, Winter 2013 Dramas and tagged Eita, Kobayashi Kaoru, Kyokuhoku Rhapsody, Matsuzaka Keiko. Bookmark the permalink.