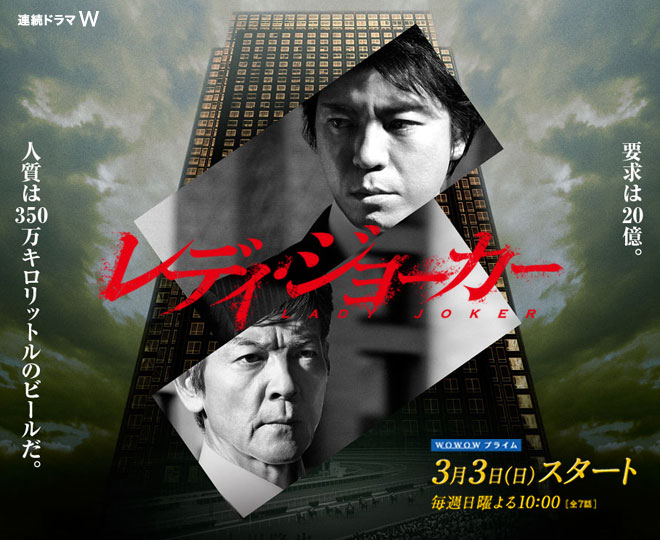 Story
One day, a suspicious-looking audio CD is delivered to Shiroyama Kyosuke, the company president of Hinode Beer, the industry’s top brewer. Shiroyama is shaken by the contents which pin the company down for its past misdeeds. Meanwhile, Monoi Seizo, the owner of a small pharmacy; Handa Shuhei, a detective who hates the police organisation; Nunokawa Junichi, a truck driver with a special needs child; Matsudo Yokichi, a lathe operator; and Ko Katsumi, a credit association employee who are buddies who met at the horse race track, set a plan in motion. Monoi has thought of stealing large sums of money from a big corporation and targets the closely linked Hinode Beer. Meanwhile, Detective Goda Yuichiro and his colleagues investigate a report that Shiroyama failed to return home. When they rush to Shiroyama’s residence, they find a written memo saying, “The company president is in our custody”. But Shiroyama is soon released. The criminal group that calls itself Lady Joker hints that it has tampered with 3.5 kilolitres of beer and demands 2 billion yen from Shiroyama. … …

Shibata Kyohei as Shiroyama Kyosuke
The company president of Hinode Beer. He is kidnapped by Lady Joker which demands 2 billion yen. He agonises alone over how to protect Hinode Beer and his family.

Toyohara Kosuke as Handa Shuhei
Police Sergeant, Urata Kita Police Precinct’s Criminal Affairs Division. Although he is a detective, he hates the police organisation and planned the series of incidents. He is very aware of Goda Yuichiro’s presence.

Yamamoto Koji as Yashiro Yoshinobu
A reporter of Toho Shimbun’s City News Desk. Nozaki Takako’s university senior. He is in charge of the Tokyo Metropolitan Police Department’s First Investigative Division. He uses his own network of contacts to get to the bottom of the matter.

Yada Akiko as Nozaki Takako
Shiroyama Kyosuke’s secretary. She exchanges information on the case with her university senior Yashiro Yoshinobu.

Izumiya Shigeru as Monoi Seizo
The owner of a small pharmacy and a central figure in Lady Joker. The death of his elder brother Seiji is the catalyst for his hatred towards Hinode Beer.

Motokariya Yuika as Sugihara Yoshiko
Shiroyama Kyosuke’s niece. The death of her boyfriend Hadano Takayuki, who is Monoi Seizo’s grandson, in a traffic accident strickens her with grief. She regrets that she is the reason for her uncle’s kidnapping.

Itao Itsuji as Nunokawa Junichi
A truck driver and former Self-Defence Force personnel. He leads a tough life as he looks after his daughter Sachi, who is a special needs child.

Kaneko Nobuaki as Matsudo Yokichi
Monoi Seizo’s horseracing buddy. A lathe operator. Nicknamed Yo-chan. He sustains serious injuries at work due to the negligence of a colleague.

Takahashi Tsutomu as Ko Katsumi
A credit association employee. His family runs a pachinko business, but he hates it. He manipulates the share price of Hinode Beer and schemes to make money.

Ito Kojun as Okamura Seiji
Monoi Seizo’s elder brother. Many decades ago he worked at Hinode Beer, but was fired by the company. He left behind a letter detailing the dismissal.

Kudo Asuka as Hadano Takayuki
Monoi Seizo’s grandson. It was his ambition to work at Hinode Beer but he was not employed. After that, he died in a traffic accident.

This blog contains information and musings on current and upcoming Japanese dramas but is not intended to be comprehensive.
View all posts by jadefrost →
This entry was posted in Winter 2013 Dramas, WOWOW and tagged Ishiguro Ken, Kamikawa Takaya, Lady Joker, Motokariya Yuika, Shibata Kyohei, Toyohara Kosuke, Yada Akiko. Bookmark the permalink.