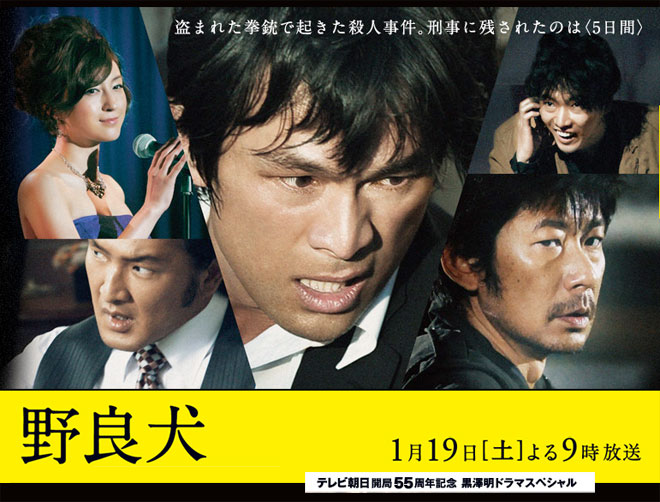 Date: From 9.00 p.m., 19 January 2013
Cast: Eguchi Yosuke, Hirosue Ryoko, Nakamura Shido, Emoto Tasuku, Nagase Masatoshi, Mimura, Osugi Ren, Shimada Kyusaku, Denden
Synopsis: The incident happened one morning in summer. Assistant Inspector Murakami Shoichi (Eguchi Yosuke) of Johoku Police Precinct is returning from a stakeout when his holstered gun is stolen by someone inside the bus. The stakeout had been round-the-clock and his sense of relief that the case was solved had allowed sleep to steal over him. The deed took place the moment he was off guard. Murakami alights and desperately chases after a suspicious man wearing a baseball cap but loses sight of him. He decides that it is his responsibility to catch the culprit and get his gun back. However, the top brass only cares about protecting their own interests and will not tolerate Murakami’s behaviour. They order veteran detective Sato Masakata (Osugi Ren) to conduct a top secret investigation, “Don’t make the case public. Get the gun back in five days.” Sato receives these instructions and starts the investigation while Murakami is suspended. Unable to bear his colleagues’ speculation that he is involved in illegal gun sales, Murakami sets out in pursuit of the culprit in order to restore his reputation and pride. He discovers the name Yanagishita Ginji (Emoto Tasuku) from the list of pickpockets with previous convictions and freezes. Yanagishita had been Murakami’s classmate in junior high school. He was a shy, nervous character. Murakami’s instincts tell him that his gun had been stolen by an old friend. Ignoring his suspension, he frantically goes after Yanagishita. However, Yanagishita just obstinately denies the deed. Telling Murakami that “there is a fellow he wants him to meet”, he takes him to some place. The person is their junior high school classmate Shigeyama Kosuke (Nakamura Shido) who had been the school gang leader and used the power and money of his parents to dominate. Now the president of Shigeyama Industries and also familiar with the underworld, Shigeyama knows that Murakami’s gun had been stolen and promises that he will certainly recover it. In exchange, he wants Murakami to search for his one-time good friend, Yusa Takeshi (Nagase Masatoshi). Back in their junior high school days, Murakami and Yusa had lived in the same way as brothers, but left the town and grew apart after something happened. According to Shigeyama, Yusa had served as his driver until two years ago. However, six months earlier, he disappeared with the company’s important documents. Seeking clues, Murakami visits Yusa’s younger sister, Aki (Hirosue Ryoko), who used to be smitten with him. Good at singing since she was a child, Aki has become a jazz singer with her talent and beauty. Murakami is dazzled by her on stage and disconcerted. Although Aki feels herself swayed by this reunion with Murakami after 25 years, she says that she does not know her brother’s whereabouts. In truth, she has a “secret” that she cannot tell him. At that moment, the feared case occurs … … Murakami’s gun is used to shoot a gang member dead!
Official Website: www.tv-asahi.co.jp/norainu

This blog contains information and musings on current and upcoming Japanese dramas but is not intended to be comprehensive.
View all posts by jadefrost →
This entry was posted in TV Asahi, Winter 2013 Drama Specials and tagged Eguchi Yosuke, Emoto Tasuku, Hirosue Ryoko, Mimura, Nakamura Shido, Norainu, Osugi Ren. Bookmark the permalink.