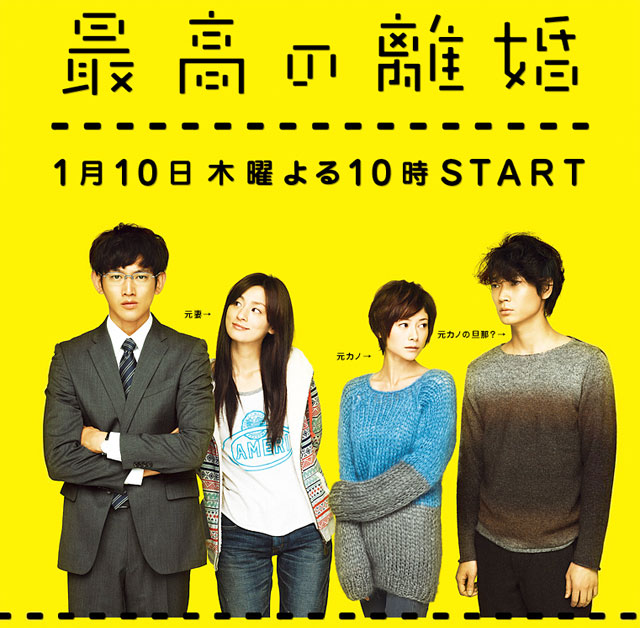 Story
Hamasaki Mitsuo is an ordinary salaryman who works at a company that installs automatic vending machines. Because he has recently been transferred to do sales which he is not good at, every day is unbearably stressful. However, what pains him the most is his relationship with Yuka, his wife of two years. In any case, he and Yuka are completely unsuited. To put it kindly, she is big-hearted. To put it negatively, she is not the type who worries about details. He does not even know whether he loves her … … One day, Hamasaki happens to meet Uehara Akari, his ex-girlfriend from university days. Akari, who used to live with Hamasaki, has faint memories of him. Newly married to Uehara Ryo, an assistant at an arts college, she has recently moved to Hamasaki’s neighbourhood and opened an aromatheraphy massage business at home. Hamasaki is for some reason in high spirits over this chance reunion, but … …

Characters
Eita as Hamasaki Mitsuo
A salaryman at a company that installs automatic vending machines. His pet phrase is “painful”. In any case, everything is painful. Work, socialising, drinking sessions … … the most painful of them all is his wife of two years, Yuka. To this day, he still does not know why they married. She is sloppy in everything. When he says “painful”, Yuka will tell him not to complain. One day, he meets Uehara Akari, his girlfriend from university days, again by coincidence. She is the female he most loved in his life. The girlfriend who suddenly broke up and left him has actually been on his mind. However, Akari has just married Uehara Ryo. Furthermore, Ryo is the complete opposite of him, a popular guy who is good at getting along with people. Meanwhile, Mitsuo is suddenly told by Yuka that she has filed for divorce. It should have been a good thing to split up with the “all painful” Yuka but why has he become obsessed with her actions?

Ono Machiko as Hamasaki Yuka
Hamasaki Mitsuo’s wife. She took over Mitsuo’s family laundry business ‘Kame-chan Cleaning’. Her pet phrase is “nevermind”. Because she was born in Fujinomiya City in Shizuoka Prefecture and grew up seeing Mt Fuji, she is the type who does not worry about small details. She became acquainted with Mitsuo when they were temporary staff at a company’s information desk. It was the Great East Japan Earthquake that spurred them to date. While walking home, she happened to run into Mitsuo and was very relieved. That day, she had a feeling that she had fallen in love and they start living together. Before long, they registered their marriage and began married life but she immediately recognised that she and her methodical husband are completely incompatible. Nevertheless, Yuka wants children, but Mitsuo hates them. She had thought that if they lived together, things would work out. However, an incident gets her fed up and she files for divorce. But she continues to live with her ex-husband for a while because none of the hurdles like informing the parents and divorce have been cleared. She thinks that she will get by somehow since they have lived together for this long despite their incompatibility but … …

Maki Yoko as Uehara Akari
The owner of an aromatherapy massage shop. It has been two months since she married her husband, Uehara Ryo. Born in Hachinohe City, Aomori Prefecture. When she was 14, her beloved father who was a fisherman, died at sea, and she cried constantly. At that moment, she was saved by the song ‘Classic’ by Judy and Mary. Taken with YUKI, she came to Tokyo. Even after she entered university, she could not give up her dream of becoming a singer. That was when she met Hamasaki Mitsuo and they started living together. Just as she was deciding whether to tell Mitsuo about her dream and her father’s death, something unforgivable happened and she impulsively left home. She later met Ryo, who was the boyfriend of a friend at an aesthetic salon that she worked at. She had already fallen in love with him soon after their meeting because the map he had drawn of the directions to the salon was very good. She stole her friend’s boyfriend and could not longer be at the salon, but she did not mind being a cunning woman as long as she has Ryo. He is very sweet even after marriage. But he is also sweet to other females and she cannot stop feeling uneasy about it.

Ayano Go as Uehara Ryo
An assistant at an arts college. Uehara Akari’s husband. A philanthropist and in a word, a fraudster. Treated as a part-timer by the college students. He is adapt at handwriting and drawing. He is also extremely popular with the married ladies in the neighbourhood because of his good magic tricks. He likes doing as he pleases. He usually has contact with people, but is told that every time he sees people he acts as if it is the first time meeting. He dislikes making people mad. When there are angry people, he will quickly disappear. He is not very interested in career promotion, money or possessions. The only thing he loves is eating. He does not think that he will truly love a person. Akari was one of the many girlfriends he had, but if marriage was his intention, she would be the one he liked the most. Even after his marriage to Akari, he continues to date other women. His college student Chihiro is one of them.

Yachigusa Kaoru as Hamasaki Aiko
Hamasaki Mitsuo’s grandmother. Divorced at a young age, she struggled to run the laundry business and bring up Mitsuo’s father. She now runs ‘Kingyo Cafe’ a stylish riverside cafe with Mitsuo’s sister and brother-in-law. She understands the eccentricities of Mitsuo more than anybody else. She loves Yuka and hopes that the two of them will be happy. Her only wish right now is to see her great grandchild.

Ichikawa Miwako as Seta Tomoyo
Hamasaki Mitsuo’s fashionable, candid elder sister. Together with her husband and grandmother, she runs ‘Kingyo Cafe’ which specialises in boiled gyoza. She gets along with Yuka.

Serina as Umino Nana
A dental hygienist at Komaki Dental Clinic which Hamasaki Mitsuo goes to. She starts to kind of like Mitsuo who complains each time he comes for a consultation.

This blog contains information and musings on current and upcoming Japanese dramas but is not intended to be comprehensive.
View all posts by jadefrost →
This entry was posted in Fuji TV, Saikou no Rikon, Winter 2013 Dramas and tagged Ayano Go, Eita, Maki Yoko, Ono Machiko, Saikou no Rikon, Sakamoto Yuji. Bookmark the permalink.