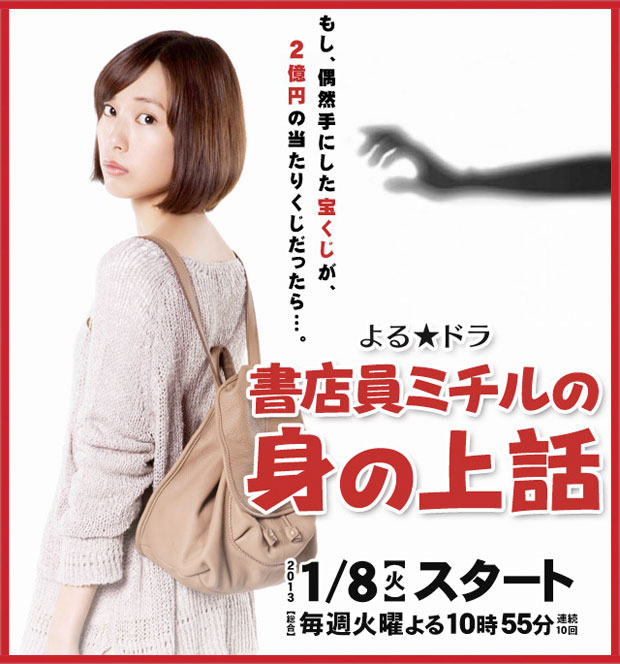 Story
Furukawa Michiru is an ordinary girl who works at a bookshop in a small town in Nagasaki. She has been dating Kanbayashi Kutaro, the son of a prominent local man, for a year, but they have not taken the plunge and married. Michiru’s little secret is that she is having an affair with Toyomasu Kazuki, a Tokyo publishing company’s salesman. One day, Michiru consults her colleague Hatsuyama Haruko, who entered the bookshop at the same time as she did, in order to see Toyomasu off to Tokyo. She excuses herself from work on the pretext of going to the dentist. That is when she is asked by Sawada Sanae (Asada Miyoko), Tateishi Takeko (Hamada Mari) and Haruko to buy lottery ticket (s). Having bought the ticket(s), Michiru goes to meet Toyomasu but on a whim, she boards the plane, accompanies him all the way to Tokyo and stays on in the metropolis. However, Michiru learns that the lottery she bought at the request of a workplace colleagues was the winning 200 million yen lottery ticket and her destiny starts to take a thrilling turn as unpredictable situations come upon her. She does not tell anyone about winning the lottery and roams around with the 200 million yen in her bank passbook. Takei Teruo, Michiru’s childhood friend who loves her, shows his unexpected true self. Kutaro and Toyomasu get involved in the matter. At the very end, an appalling truth comes to light.

Characters
Toda Erika as Furukawa Michiru
Born to a family that runs a fishing boat business in a small town in Nagasaki prefecture. She has lived passively ever since she lost her mother at a young age. After graduating from high school, she found a job at the local bookshop on her father’s recommendation. She has been going out with Kanbayashi Kutaro, the son of the jewellery store owner, but vaguely feels that it would be wrong to go on and marry him. On her 25th birthday, she follows Toyomasu Kazuki the publishing company salesman whom she has been having an affair with and impulsively elopes to Tokyo. Because the lottery ticket that her colleague asked her to buy is the winning 200 million yen ticket, Michiru’s destiny take a turn in an unexpected direction.

Kora Kengo as Takei Teruo
Furukawa Michiru’s childhood friend. He is two years her junior and attends a private Tokyo university. When he was an elementary student, his family moved from Kumamoto to Nagasaki and he met Michiru. He has continued to love her since then and is like a faithful servant who obeys her implicitly but she is completely unaware of his feelings. To Michiru, who has lied to her hometown people and remained in Tokyo, Takei is a trustworthy partner that has helped her in her new life but he eventually shows his surprising true self.

Emoto Tasuku as Kanbayashi Kutaro
The son and heir of a jewellery store owner. Because he grew up in a privileged background, he has never known hardship and does not doubt people. He does not understand people’s feelings too. He is completely unaware of Furukawa Michiru’s true feelings and firmly believes they will marry. Worried about Michiru whom he has not been able to contact, he goes up to Tokyo. He determines her whereabouts but has an unexpected mishap.

Ando Sakura as Hatsuyama Haruko
Furukawa Michiru’s colleague at the same bookshop. A dependable person who was raised by her single mother. Michiru’s unguarded behaviour feels dangerous and Haruko offers a helping hand to her on many occasions. She was supposed to have sent Michiru off in order to make her end the affair with Toyomasu Kazuki, but that is the start of continual change for Michiru.

Haru as Furukawa Chiaki
Furukawa Michiru’s younger sister. She attends a local professional training college in order to become a hairdresser. Not wanting to drift through life like Michiru, she loses no time in deciding on the path to take. She is the most level-headed in observing her father and the family.

Arai Hirofumi as Toyomasu Kazuki
A salaryman at a major Tokyo publishing company. He gets to know Furukawa Michiru through his monthly business trips. At home, he is henpecked by his wife who is receiving infertility treatment. There appear to be rumours that he had dated other female employees at the bookshop before he and Michiru started their affair. To Michiru, Toyomasu seems like a prince who will spirit her out from her closed world, but … …

Hamada Mari as Tateishi Takeko
A senior at the bookshop where Furukawa Michiru works. She is supporting the family in place of her husband who was laid off. She has a relationship with Toyomasu Kazuki and is secretly contemplating divorce. She entrusted money to Michiru to buy a lottery ticket, but Michiru does not return and she becomes increasingly suspicious of her.

Hirata Mitsuru as Furukawa Tsugunori
Furukawa Michiru’s father. He runs a fishing boat business. He remarried after Michiru and Chiaki’s mother died of illness. Because he is old fashioned and does not have a way with words, he is not able to express himself well even though he cares for Michiru. Michiru’s sudden disappearance stuns him.

Omori Nao as Katsuki Kengo
A man who identifies himself as Furukawa Michiru’s husband. How does he know about her past? When andwhere did he meet her? All these mysteries are revealed in due course.

This blog contains information and musings on current and upcoming Japanese dramas but is not intended to be comprehensive.
View all posts by jadefrost →
This entry was posted in NHK, Winter 2013 Dramas and tagged Ando Sakura, Emoto Tasuku, Haru, Hirata Mitsuru, Kora Kengo, Shotenin Michiru no Mi no Uebanashi, Toda Erika. Bookmark the permalink.