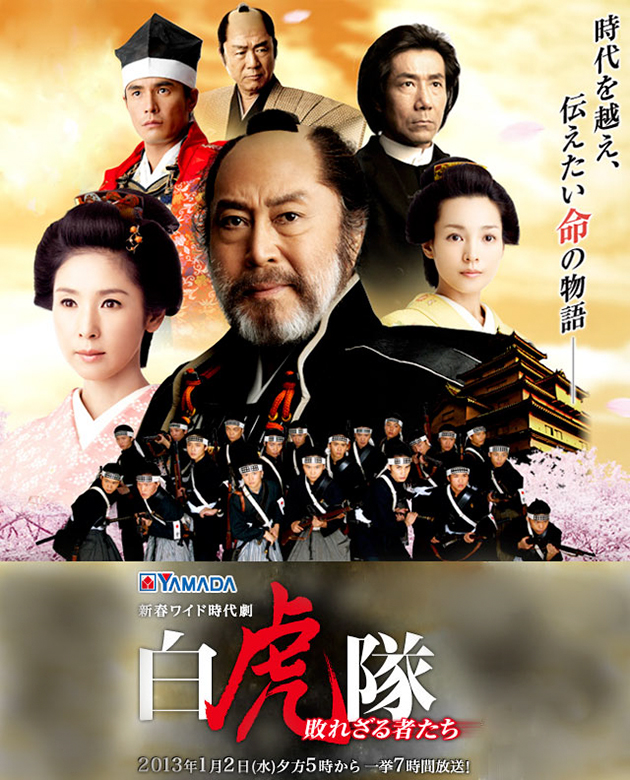 Date: From 5.00 p.m., 2 January 2013
Cast: Kitaoji Kinya, Kuroki Hitomi, Kuninaka Ryoko, Watanabe Dai, Maeda Aki, Miki Honoka, Suga Kenta, Nakamura Aoi, Nishii Yukito, Yamada Jundai, Ito Hideaki, Enari Kazuki, Ryu Daisuke, Nashimoto Kenjiro, Yamashita Kisuke, Ishida Taro, Terada Minori, Watanabe Misako, Nakamura Katsuo, Mizuno Maki, Kobayashi Nenji, Kishitani Goro
Synopsis: Towards the end of the Tokugawa shogunate, Saigo Tanomo (Kitaoji Kinya), the chief retainer of the Aizu domain, lived simply but harmoniously with his wife Chieko (Kuroki Hitomi), mother (Watanabe Misako), sisters (Kuninaka Ryoko, Maeda Aki) and children. As the leader of the domain’s school ‘Nisshinkan’, he also trained the youth. In 1862, the lord of the Aizu domain, Matsudaira Katamori (Ito Hideaki), was appointed to be the Kyoto military commissioner. At that time, the Edo shogunate’s prestige was waning and radical wandering samurai belonging to the faction that called for reverence of the Emperor and expulsion of foreigners had gathered in Kyoto. Law and order deteriorated. In the midst of this, the shogunate was attempting to wipe out these lawless samurai with the Aizu domain’s superior military prowess. Knowing that the domain was facing a dire financial situation, Saigo was adamant that his lord give up the post as Kyoto’s military commissioner. However, the compassionate and loyal Katamori would not listen to him and headed to Kyoto despite his poor health. With the Shinsengumi under the his control, he harshly cracked down on those samurai. But this meant incurring the wrath of the Satsuma and Choshu domains that would form the new government. In the first month of Keio 4 (1868), the shogunate troops and the Satsuma-Choshu led new government army finally clashed in the Battle of Toba-Fushimi. However, they were defeated by the superior military power of the new government army which was equipped with the latest Western weaponry. After that, Katamori reaches the decision to join forces with the domains in Tohoku and take on the new government army in Aizu. At this time, 16 and 17-year-old youth of the Aizu domain were organised as the Byakkotai (Suga Kenta, Nakamura Aoi, Nishii Yukito). Saigo, who had been reinstated to his position as the chief retainer, was put in charge of the strategically important Shirakawaguchi, but … …
Official Website: www.tv-tokyo.co.jp/byakotai

This blog contains information and musings on current and upcoming Japanese dramas but is not intended to be comprehensive.
View all posts by jadefrost →
This entry was posted in TV Tokyo, Winter 2013 Drama Specials and tagged Byakkotai, Ito Hideaki, Kishitani Goro, Kitaoji Kinya, Kobayashi Nenji, Kuninaka Ryoko, Kuroki Hitomi. Bookmark the permalink.