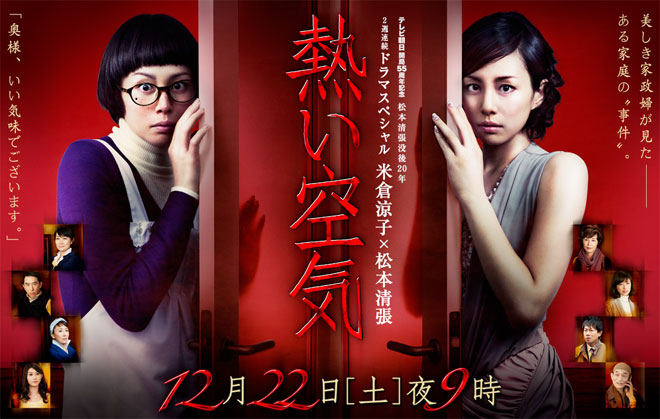 Date: From 9.00 p.m., 22 December 2012
Cast: Yonekura Ryoko, Yo Kimiko, Danta Yasunori, Nogiwa Yoko, Takaoka Saki
Synopsis: Sporting black glasses and dishevelled hair, the brusque, unfashionable divorced housekeeper Konno Nobuko (Yonekura Ryoko) is sent to the Inamura family in a quiet residential neighbourhood in Tokyo. The husband Tatsuya (Danta Yasunori), the head of a university hospital’s department of internal medicine, lives with his wife Haruko (Yo Kimiko), their three growing sons and Tatsuya’s mother Shigeko (Nogiwa Yoko). Haruko is just like a graceful doctor’s wife. However, Nobuko immediately perceives that she is only concerned about appearances and quickly feels disgusted by her employer’s sympathetic, pretentious, upper crust attitude. In contrast, Haruko is relieved that the housekeeper is an unattractive woman. She does not want a beautiful woman to get close to her husband and adolescent sons. Is this the thought of a wife and mother or is it a jealousy of young beautiful women that has sprouted within Haruko at some point? However, the real Nobuko is a beauty who catches the eyes of people. She is, for some reason, extremely uncomfortable with her looks and has deliberately disguised herself to hide it. Nobuko quickly comes to know the problems that plague not just Haruko but the entire household. Tatsuya is indifferent about domestic issues and reeks of infidelity. The children are wilful and rude. Shigeko is treated like dirt by the family. Learning that the Inamuras are putting on a pretense of being a happy family, Nobuko starts to feel vengeful towards Haruko who sneers at her drab appearance and occupation, and the children who openly scorn her. Although Haruko initially welcomed Nobuko, she is gradually spooked by her words and behaviour and suddenly announces that she is dismissing her for being a kleptomaniac. This enrages Nobuko. She exploits the weaknesses of the family that she has already grasped and decides to remain. Her objective for being in such uncomfortable surroundings is … …?
Official Website: www.tv-asahi.co.jp/atsuikuuki/

This blog contains information and musings on current and upcoming Japanese dramas but is not intended to be comprehensive.
View all posts by jadefrost →
This entry was posted in Fall 2012 Drama Specials, TV Asahi and tagged Atsui Kuuki, Nogiwa Yoko, Takaoka Saki, Yo Kimiko, Yonekura Ryoko. Bookmark the permalink.